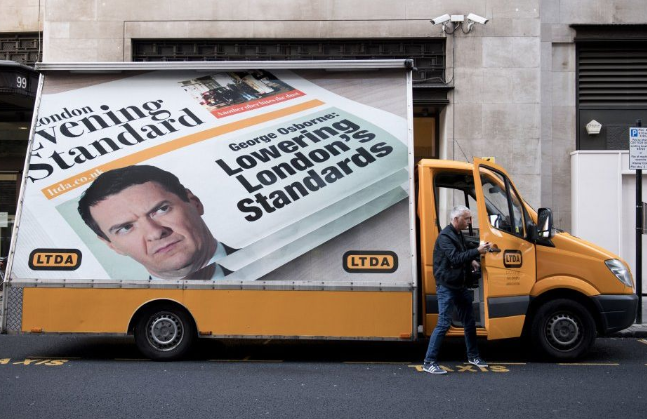 The project, called London 2020, is being directed by Osborne. It effectively sweeps away the conventional ethical divide between news and advertising inside the Standard – and is set to include “favourable” news coverage of the firms involved, with readers unable to differentiate between “news” that is paid-for and other commercially-branded content.

Leading companies, most operating global businesses, were given detailed sales presentations by Evening Standard executives at the newspaper’s west London offices in an effort to sign them up to the lucrative deal.

Among those that have paid half a million pounds each to be involved are international taxi-app firm Uber, which is facing an imminent court appeal against the decision to cancel its licence to operate in London. The Evening Standard has previously come under fire for not declaring Osborne’s £650,000-a-year part time job with the fund managers BlackRock, who hold a £500mstake in Uber.

The global tech giant, Google, still recovering from reputational damage over its low UK tax bills and criticism over its close relationship to the Cameron-Osborne government, has also signed up.

Some companies, including Starbucks, walked away from the Evening Standard’s pitch, rejecting the offer of paying to boost their reputations through tailored news and comment.

London 2020 is scheduled to start on June 5. Unbranded news stories, expected to be written by staff reporters – but paid for by the new commercial “partners” as part of the 2020 deal – have already been planned for inclusion in the paper’s news pages within a week of the project’s launch.

The London Evening Standard has a circulation of close to 900,000 and distributes more copies within a two-mile radius of Westminster than the Times does across the UK nationally. Many London commuters, who pick up their free copy of the Standard at underground and rail stations, will be unaware that they will be reading paid-for news coverage that is part of a wider commercial deal.

Although the 2020 campaigns will involve branded, native and advertorial pages, along with public debates hosted by the Standard, the six partners have also been promised the Standard will carry “money-can’t-buy” positive news and “favourable” comment pieces that will appear to readers as routine, independently written editorial.

By the established industry definition of “news” – which makes or breaks a newspaper’s integrity and its editor’s reputation – a commercial pay-off is supposed to play no part.

One Starbucks senior executive, who asked not to be named, told openDemocracy:

“Buying positive news coverage is PR death…something you might do in Saudi Arabia, but not here. This wasn’t right for us. We do engage in advertorial [a hybrid mix of advertising and editorial] but that’s just marketing. We don’t need to buy our reputation.”

A formal statement from Starbucks confirmed that the company “had met with ESI and opted not to move forward with the project”.

A spokesman for ESI Media said that the “allegations about the Evening Standard are baseless and wrong.”

“We would never offer ‘positive news’ coverage and ‘favourable’ comment as part of a commercial deal. The Evening Standard’s editorial integrity and independence is always at the heart of everything we do and is beyond question. That’s why we have such a big and loyal readership.

“No commercial agreement would ever include ‘favourable’ news coverage. Like all British newspapers, the Evening Standard has valued commercial partners and works with them on specific campaigns for the benefit of our readers. Indeed, editorial independence is and remains guaranteed in the contracts we sign.”

openDemocracy contacted Uber and Google for their comments on the London 2020 project. At the time of publishing, no response had been received from either.

‘Improving London for the benefit of all’?

Uber’s involvement offers further conflicts-of-interest for George Osborne. The world’s largest fund manager, BlackRock, pays Osborne £650,000 a year for a one-day-a-week role as an adviser. BlackRock also has an investment stake in Uber worth £500m.

Google’s decision to involve itself in this paid-for news deal will also raise eyebrows, given the objectives of its Digital News Initiative in Europe. The DNI has a budget of €150 million over the next three years. Google have stated their aim is to “combat misinformation and disinformation” and “help consumers distinguish fact from fiction online”.

London 2020 involves six “themed projects” running for two years. These include politicised initiatives on clean air, plastic pollution, schools and workplace tech and a project designed to address London’s housing crisis. The six 2020 “partners” have each paid half a million pounds to head projects that will be sold to Standard readers as “improving London for the benefit of all.”

In language lifted directly from Osborne’s years as head of the UK Treasury in David Cameron’s government, the project was presented to potential partners as aiming to highlight London as an “innovative and economic powerhouse” which is “fit for the future”.

The paid-for campaigns will conclude close to the date of the next London mayoral elections in 2020. Partners have been promised the Standard will be “dedicated to delivering” the aims of the six projects over the next two years.

As part of the sales pitch at the Evening Standard’s West London offices, would-be partners were told to expect campaigns that will “generate numerous news stories, comment pieces and high-profile backers”.

One executive with knowledge of the project said that the paying partners were told that their company’s own planned communications and marketing strategies could be coordinated with the Standard’s news coverage. The Standard would trail positive “news” from the six 2020 partners, with other news organisations and media outlets expected to follow.

Another executive was told the “money-can’t-buy” campaigns in the Standard aimed to create “news that will make news, but news that comes with a positive message.” According to one insider:

“What was being offered was clear – theatrically constructed news, showing everything good being done.”

Uber, for its half-million fee, will be given the branded lead role in the “clean air project” which is supposed to highlight the benefits of “cleaner transport” and of turning London “electric” by 2020.

Starbucks was offered the “plastic pollution project” which claims it will be “lobbying to sharply reduce London’s single-use plastic consumption.” The coffee company refused to sign up, telling Standard executives they already had their own plans.

Google’s fee will cover parts of the schools and work tech projects. Both involve the promised promotion of digital skills and the development of a “network of digital training hubs.”

For their £3 million the partners have also been promised a special monthly print section themed to individual projects; a “bespoke” social media strategy including readers polls; and public debates, exhibitions and large-scale events organised by the Standard.

The deal is also set to include “specially created wraps”, where the front and back pages of the newspaper become a large showcase advert, along with special “native advertising” that matches the form and design of the Standard’s editorial pages.

Last week all the department heads in the Standard, including the news and comment editors, were given their first sight of the London 2020 project. Until then Osborne had confined the project to a small core team.

End of ‘church and state’ divide

Earlier this year openDemocracy exposed a similar paid-for deal at the Evening Standard involving the Swiss bio-chem and agriculture company, Syngenta. Positive news coverage and skewed public debates were part of the arrangement with the commercial division of the Standard, ESI Media.

ESI Media, owned by the Moscow-based oligarch, Alexander Lebedev and run in London by his son Evgeny, also governs the UK’s online Independent newspaper, which is located in the same Kensington office as the Standard.

The group commercial director of ESI, Jon O’Donnell, has previously said ESI no longer sees itself as just involved in advertising, but was now a “media business”. O’Donnell has also said the once “strict divide between the so-called ‘church and state’ [editorial and advertising] was doing more harm than good.”

‘Converting PR into news – for a price’

Details of London 2020 and Osborne’s lead role in driving the project has brought criticism from leading media commentators and industry figures.

The journalist and broadcaster, Peter Oborne, currently associate editor of The Spectator and a political columnist with the Daily Mail, resigned as the chief political commentator of the Daily Telegraph in 2015. He alleged there was an unscrupulous relationship between the editorial and advertising departments at the Telegraph, which led to the suppression of negative stories about the global banking giant HSBC because it was a major source of revenue. His resignation letter was published by openDemocracy. The Telegraph dismissed Oborne’s claims.

Speaking in reaction to the London 2020 deal, he told openDemocracy:

“George Orwell – who worked for the Evening Standard – once said that journalism is printing what someone else does not want printed, and everything else is public relations. George Osborne, as the Standard’s editor, appears to be ignoring the dangers Orwell pointed out and is converting PR into news – for a price.

“It’s essential that the commercial arm of any newspaper is kept at arm’s length from editorial. openDemocracy’s report suggests that news and PR have become hopelessly intertwined and confused at the Standard. George Osborne as editor has a great many questions to answer as to why he’s doing this – the main one being that the news and comment pages of his newspaper seem to be up for sale. If this is allowed, how can the integrity of this newspaper be maintained?”

General Secretary of the Licensed Taxi Drivers’ Association, Steve McNamara, accused the Standard of putting “its profits ahead of Londoners” by selling favourable coverage to Uber.

“Uber was stripped of its licence in London for failing to protect passengers in this city. Uber deliberately did not report serious crimes or conduct appropriate background checks on its drivers. Buying positive news coverage to try and influence the upcoming licence appeal hearing is the lowest of the low. If Uber is really sorry for its ‘mistakes’ it should use this money to clean up its operation and pay its drivers more.”

A comment from an ESI media spokesperson was added to this story. It was received a day after the company made comments about London 2020 to other media. A formal statement from Starbucks has also been added.