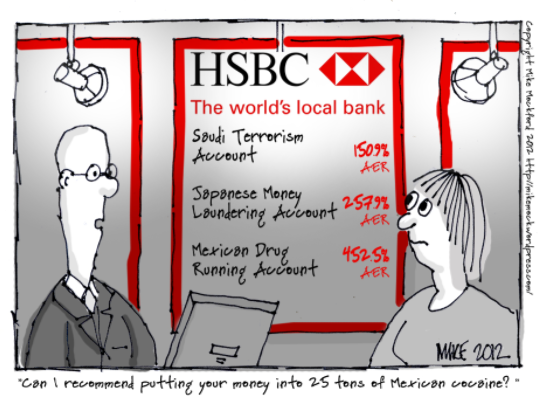 By Tax Justice Network: We recommend you watch the newly released film HSBC: Gangsters of Finance, produced byARTE TV available in German, French, English and Spanish. They describe the film as follows:

“Since the 2008 crisis, HSBC has been involved in countless scandals: Money laundering for drug cartels, corruption, tax fraud… And yet the international bank escapes justice with insignificant fines. Why are they “too big to jail?”

This film features some excellent interviews including with the Tax Justice Network’s John Christensen and our senior adviser Jack Blum.

HSBC: Gangsters of Finance explores how big finance can overpower and capture politicians and our democracy. As the film points out, if HSBC bank was a country it’d be the world’s fifth largest economy, managing as it does, three thousand billion dollars.

Ironically it was in the name of global financial stability that the US Department of Justice allowed the bank to continue trading in the United States and didn’t withdraw its licence after it was involved in laundering Colombian and Mexican drug money and US sanctions-busting.

Nonetheless, despite ample evidence of multiple felonies, which stretch back to HSBC’s initial role as a launderer for the proceeds of British opium trade in China, British politicians like former Chancellor George Osborne bent over backwards to protect HSBC from prosecution. Yet as this film shows, the ‘too big to jail’ bank and some of its practices are a threat to global financial stability.