The Human Cost Of The Destruction Of The NHS 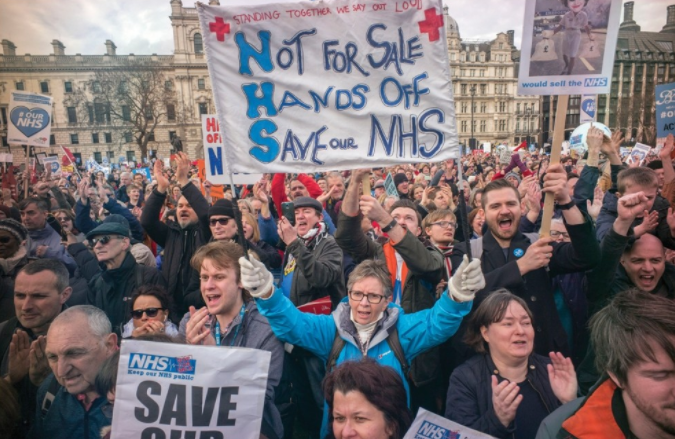 By NHS FightBack: The thousands marching today in defence of the National Health Service (NHS) represent millions opposed to its destruction. The NHS faces far more than a “winter crisis.” Rather, this winter has exposed how years of funding cuts, running down of services, combined with chronic staff shortages is threatening the safety and lives of patients.

In December, more than 300,000 patients waited more than four hours in England’s A&E departments to be seen, treated and discharged or admitted. The percentage of patients being treated within four hours fell to its lowest-ever level of 77.3 percent. Only three out of 137 NHS trusts managed to meet the official 95 percent target.

NHS units are unable to discharge many patients due to lack of social care and the loss of available beds. Many hospitals are running at a dangerous level of bed occupancy of more than 95 percent—10 percent higher than recommended as safe.

Standard targets for Accident and Emergencies (A&Es), cancer treatment and planned operations have all been missed. This year began with news of NHS England’s decision to postpone tens of thousands of non-urgent operations and outpatient clinics until the end of January to help hospitals cope with demand.

An Ambulance Service whistle-blower told the Health Service Journal that in the East of England alone at least 40 patients had been “harmed or died following significant ambulance delays” in less than three weeks between mid-December and early January.

A recent joint report by Oxford and Cambridge Universities and the University of London found that cuts to NHS and Social Care provision since 2010 could result in nearly 200,000 “excess” deaths by the end of 2020 in England.

Prime Minister Theresa May and her Secretary of Health and Social Care, Jeremy Hunt responded by claiming that the NHS was better prepared for this winter than ever before.

In January, 68 senior doctors who are responsible for day-to-day functioning of A&E departments in England and Wales replied:

“The fact remains… that the NHS is severely and chronically underfunded.  We have insufficient hospital and community beds and staff of all disciplines especially at the front door to cope with our ageing population’s health needs… this current level of safety compromise is at times intolerable, despite the best efforts of staff.”

They noted that patients are sleeping in makeshift wards set up in side rooms. Others faced trolley waits of up to 12 hours. Thousands of patients are left stuck in the back of ambulances. More than 120 patients a day are being managed in corridors, some dying prematurely.

Their appeals for more funding and resources will also fall on deaf ears.

One of the major companies involved in the backdoor privatisation of the NHS was Carillion, which collapsed last month. As a result, the NHS was forced to trigger emergency contingency plans across 14 hospital trusts to maintain essential services. This is only a foretaste of what is to come as a result of the efforts of the major corporations and the government to bleed the NHS dry.

The NHS is being deliberately brought to the brink of collapse to generate a crisis that will then justify the ongoing privatisation of the profitable parts of health care, leaving chronic care to be rationed by a diminished state sector.

The organisers of today’s demonstration, the People’s Assembly and Health Campaigns Together, maintain that the NHS will be defended by the health unions, while the election of a Jeremy Corbyn-led Labour government offers a political road forward.

Both these contentions are false. Year after year, the unions have defended nothing and have betrayed every struggle mounted by workers against the employers and the government. They are responsible for the destruction of the NHS.

Behind his rhetoric about the “fight” to defend the NHS and calls for some minimal reforms, Corbyn leads a right-wing, pro-capitalist party that, in government, laid the basis for the privatisation of the public health care through its massive expansion of the Private Finance Initiative (PFI). Likewise, it was Labour that pioneered the savage austerity measures required to pay for the £1 trillion bailout of the banks following the 2008 global financial crash, including the first £20 billion to be withdrawn from the NHS in “efficiency savings.”

This party would rather see the NHS razed to the ground than come into conflict with the banks and major corporations. And not only will Corbyn continue to place unity of the Labour Party above any considerations of principle, but he also has no policies with which to defend the NHS.

Corbyn has promised to repeal the 2012 Health and Social Care Act—which removed the responsibility from the Health Secretary to provide a universal health care system in England—and to end the “PFI rip-off.” But where will he get the billions of pounds needed to adequately fund the NHS when Shadow Chancellor John McDonnell has promised big business that Labour will be a “fiscally responsible” government? What is he going to do about the domination of big pharma and cancelling PFI repayments running into billions?

Access to health care is a basic social right, which is being destroyed by a money-mad ruling elite that sees all areas of social need only as the means to accumulate further massive profits. Therefore, the only way to defend the NHS is by taking control of public health care out of the hands of the ruling elite, in a political struggle against the capitalist class and for socialism.

Health workers and all those who want to fight in defence of the NHS must now undertake to build a new leadership, which fights for socialism. In 2012, the Socialist Equality Party initiated the NHS FightBack campaign to take forward such a struggle, independent of the trade unions, among health workers and throughout the working class.