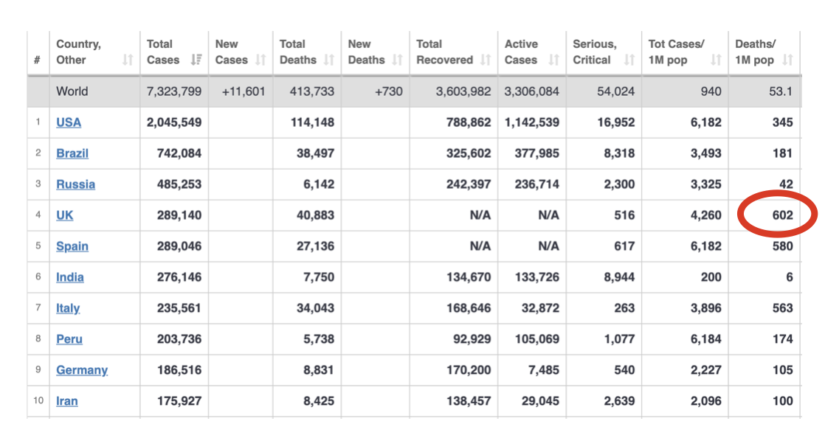 By TruePublica: As of June 9th, a YouGov tracker has seen the approval rating of the governments’ handling of the Covid crisis plummet. About half (49%) of the population disapprove to the question – “Do you approve or disapprove of the Government’s record to date?”

As a result, half of the country (50% exactly) now thinks Boris Johnson himself is doing a bad job – an increase of 14 points. By contrast, only 21% think Starmer is doing badly where almost half (48%) of the public has a favourable view on the leader of the opposition..

It means Starmer’s overall net approval rating is now at 27 points compared to the prime minister’s at -7 points.

This news comes as further confirmation is published that the government was doing a truly terrible job handling Covid-19 as the UK government’s pandemic response was ranked joint-last in a list of major countries. Britain actually ranks next to Mexico and one more place behind America. 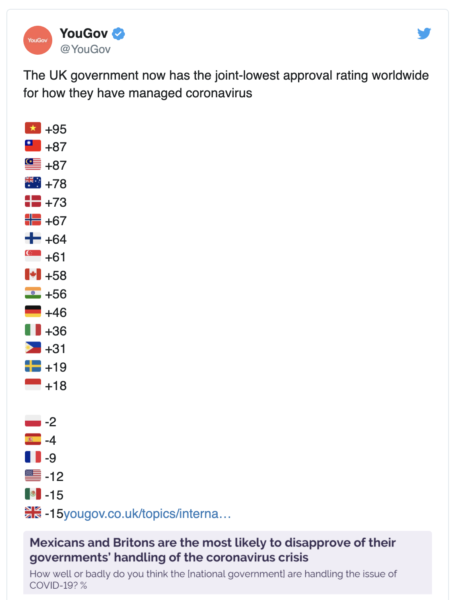 Officially, Britain now holds the No1 spot for the worst amount of deaths per million of population in the world for a large country (over 15 million) by romping past Spain and Italy. With just o.87 per cent of world population, Britain has officially logged 9.8 per cent of global Covid-19 deaths. By any stretch of the numbers game – this is by far the worst possible result. If Britain had the same population of America, the death toll would correlate to well over 200,000.

Last week an IPSOS poll found that the shift in polling for Labour suggests that Keir Starmer had “detoxified” the party.

Three other polls over the weekend put the Tory lead over the opposition party at between two and three points, which is still a dramatic fall from the beginning of the Covid-19 crisis.

When the economic crisis really starts to unfold, it is not difficult to see that this government will fail there too, even though the taxpayer has approved of one of the biggest economic rescue packages in the world.