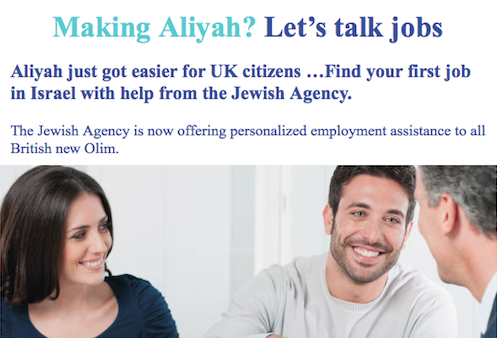 By Jonathan Cook: Did the law in Britain and the United States allow apartheid South Africa to advertise job opportunities to white Britons and Americans that were not also available to those countries’ black citizens? And was it possible for the apartheid regime to hold “employment recruitment” sessions for whites-only in British and American cities, in an effort to bolster its white population?

And even if British and US law allowed South Africa to do such things, can we imagine that these practices would have passed without eliciting noisy protests outside those careers advice meetings and questions in each country’s legislature?

And yet this is exactly what is happening right now in the US and Europe in a different context: Israel. And so far there has been not a peep. Yes, Israel is singled out, but the exceptionalism works to its advantage, not to its detriment.

The Jewish Agency, an international Zionist organisation with semi-governmental status in Israel, is currently publicising in the UK’s Jewish Chronicle newspaper job opportunities in Israel for British citizens – but only if they are Jews. Those interested can attend meetings in London and Manchester, organised by the Agency’s Global Service Centre.

Israel has been far more careful about concealing the nature of its apartheid policies than South Africa was. It therefore intentionally uses language as a tool of deception. Its racist ads do not explicitly refer to “Jews”, which might make the rest of us deeply uncomfortable. Instead, it adopts code words for “Jews” that only those who can benefit will understand.

‘Aliyah’ and the Law of Return

To decode this and similar adverts, we need to understand how Israel originally engineered an apartheid structure of citizenship, embedded in a piece of foundational legislation known as the 1950 Law of Return. It entitles every Jew in the world – but only Jews – to immigrate to Israel. Some three millions Jews have benefited from the legislation.

Separate legislation, the Citizenship Law of 1952, applies to non-Jews. Under pressure from the United Nations, Israel passed this additional law to allow a small number of Palestinians who managed to survive the mass expulsions of the 1948 war – or what Palestinians call the Nakba, Arabic for “Catastrophe” – to gain a belated Israeli citizenship. However, the same legislation denied them the right to bring relatives – any of the 750,000 Palestinian refugees who had been recently forced into exile, or their descendants – back to their homes in what had become the state of Israel. Many of these refugees continue to languish in camps across the Middle East.

For nearly seven decades, the Citizenship Law has prevented all forms of non-Jewish immigration to Israel, except one. Non-Jews can enter a lengthy naturalisation process, but only if they marry an Israeli citizen. In practice, only a few dozen non-Jews manage to get citizenship this way a year. And most Palestinians living outside Israel, and many citizens of Arab countries, are explicitly barred from this marriage route under a 2003 amendment to the Citizenship Law.

Meanwhile, under the Law of Return, many hundreds of thousands of Jews have immigrated to Israel. They are said to have made “aliyah”, the Hebrew word for “ascent”, suggesting that, in moving to Israel, such Jews are responding to a Biblical commandment. The Hebrew noun for Jews who “ascend” is “oleh” in the singular and “olim” in the plural. With this information, one can decode the Jewish Agency’s racist advertisement.

Not everyone can be ‘olim’

The headline asks British citizens whether they are “making aliyah” – in other words, whether they are entitled to come to Israel as a Jew under the Law of Return. This advert offers job opportunities only to them – or, as it states in the first line of text, to “British new olim”.

Here is the advert’s most deceptive line: “Any UK citizen interested in making Aliyah can now schedule a meeting with an employment adviser. Meetings are conducted regularly in London and Manchester.” That “Any UK citizen” sounds egalitarian, until one understands that the qualifier referring to “aliyah” means it applies only to Jews.

Similar advertisements are doubtless being published in the American and European media. Certainly, the Jewish Agency is offering migration and employment advice only to Jews in the United States and across Europe – and has done so for decades.

As Moshe Machover, a Israeli-British professor of philosophy who was recently expelled from the British Labour party, has noted, some of these jobs are likely to be in the settlements, built by Israel on Palestinian land and in violation of international law. Israel and the Jewish Agency are known to offer incentives to encourage new immigrants to head to the occupied territories. One recent survey found that about 12 per cent of American Jews immigrating chose a West Bank settlement as their home.

Contrast the laissez-faire attitude in Britain to these clearly racist ads with the crackdown last week on an advertising campaign intended for London’s underground. It would have highlighted Palestinian opposition to the Balfour Declaration, a promise by the British government exactly 100 years ago to create a Jewish “national home” in Palestine.

Transport for London rejected the ads because they “did not comply fully with our guidelines,” according to a spokesman. One clause reportedly allows bans in cases where “images or messages … relate to matters of public controversy or sensitivity”.

But, it seems, there is nothing controversial or sensitive about recruiting British Jews to Israel and the settlements, even as millions of Palestinians are still denied the right to return to their homes after nearly 70 years.

The world has largely turned a blind eye to the apartheid legal regime inside Israel, in part because it has not grasped the systematic and institutionalised nature of the segregation enforced by Israel – highlighted in nearly 70 laws that explicitly discriminate based on whether citizens are Jewish or not.

But at least those racist laws are enforced either inside Israel or in the occupied territories.

Here, we are talking about the complicity of western states in allowing racist adverts to be published and racist meetings to be held on their own soil, even though the fundamental tenets of their non-discrimination and equal opportunities legislation are surely being flouted. And still, not a word is being said about it.