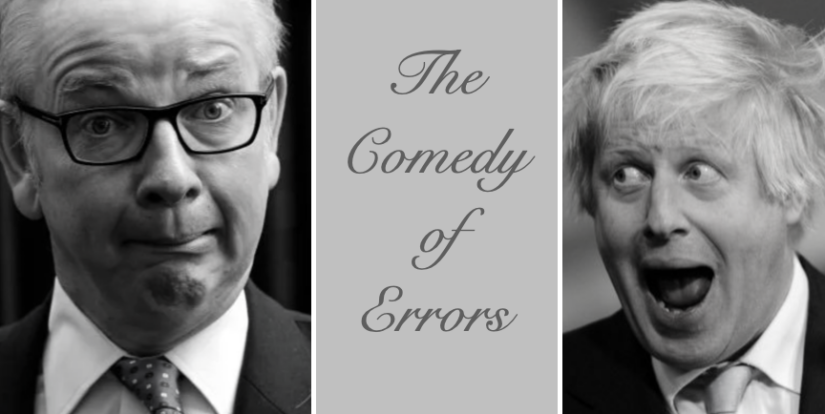 TruePublica Editor: What a state the state is in. Far from the promises of taking back control – Boris Johnson’s government has managed the impossible and achieved the opposite. One day, a great British comedy, a comedy of errors, will centre around a hapless, indecisive, over-optimistic PM and his fawning groupies who crashed just about everything they turned their venal noses towards.

And as the sun sets on the sunny uplands that never were, we end 2020 with pariah Britain shut off from the rest of the world and ‘Drowning Street’ doing what it does best – saluting as it sinks to the mirage of its own exceptionalism that everyone else merely sniggers at – and rest of us have to pay for.

And the people have good reason to make a stand. It is true to say that since this Prime Minster rose to high office – never in the history of mankind have so few owed so much to so many. No-one else has managed such upward mobility for the wealthy, in such a time. Maggie will be looking down upon Boris with unbridled pride as the super-rich gorge on global misery.

It is apparent that the anarchy-o-meter is turned up to full volume for the rich and powerful who stalk the corridors of power. Promises and U-turns are now married. Truth and morality divorced. Our philandering PM is showering his crawling bootlicking sycophants with billions of taxpayers cash. His dalliance with corruption and nepotism is already legendary.

Failure is the new victory. From billions wasted on a desperately needed test and trace system that doesn’t work to Brexit border systems set up to fall apart at the first sight of a 16-wheeler. Even Kent’s truck parks are submerged underwater in a hint of divine intervention that makes some of us think that even God believes Brexit is a stupid idea. He even gave Boris a dose of his finest SARS-CoV-2, and when that didn’t work he upgraded it to a teenage mutant ninja version that caused the world to show a palm to anyone or anything British. They acted, we didn’t. But still, the hint is not taken. We soldier on into the abyss.

Synonymous with the era of this government is Priti Patel – the minister in charge of bullying, coercion, abuse and intimidation. Then we have Matt Hancock – secretary of state for awarding jobs and other advantages to friends and trusted colleagues. Of course there is Michael Gove, head of secrecy, information suppression and censorship. Then we have ex-banker, billionaire and tax-avoiding Rishi the offshorer Sunak – Chancellor of the Ministry of Financial U-turns. His ‘eat out to infect all’ policy worked a treat. Then there’s the secretary of state for alternative facts, fiction and dishonesty Dominic Raab. And who could forget Gavin Williamson – the embarrassingly dim education minister, and Secretary of State for Cronyism Robert Jenrick along with Seulla Braverman QC – the lawbreaking Attorney-General. Of course, special mention should go to top Tory MP (not a member of the front bench) Mark Francois – who really ought to be Minister for Women and Equalities, a position currently held by Liz Truss – the UK’s trade envoy to smallest economies in the world. Last but not least we should look towards the Most Honourable Archbishop Jacob Rees-Mogg, Leader of the House of Common Liars for leadership. Inspired by Jesus himself is his infinite compassion for those struggling the most, especially for our youngest and most vulnerable. His latest act of charity is the calorie deficient diet programme designed to ensure no poverty struck child gets fat – or survives into adulthood for that matter.

As for the billionaires, it was an interesting twelve months. Earlier in the year, the stock market cratered then rallied. At first, the billionaires thought they were going to lose money in the greatest economic crash since asteroids killed just about all mammalian life on earth – but then realised that like the financial crash – they would be bailed out. Socialism rocks doesn’t it when a crisis calls eh! However, incompetence comes with its annoying relative – incontinence. It turns out that you can throw more money than any other peer nation at a problem such as a pandemic like Britain did – but if you don’t know what you’re doing, everything turns shitty. Just as we enter 2021, hundreds of thousands of firms are now reporting they are on the brink of folding and an additional 700,000 jobs are to be lost due to Brexit. So instead of giving £100billion to a moonshot that never launched – over £30,000 in cash could have been given to each and every one of the 3 million unemployed we’ll soon have.

In more signs from the heavens that the almighty is miffed at us Brits – the FTSE has since fallen, so has Sterling. There’s a reason. With escalating unemployment comes another disastrous failure of the state. Rapidly rising household debt leads to poverty and then homelessness. But that’s not the worry of the FTSE or the money traders – having less people to extract from is. Covid is one thing but Brexit’s sunny uplands doubles-down on any Covid recession for much longer. Well, that’s according to various state-funded studies. But then that’s fake news – right?

However, the Covid crisis is our foremost problem, the second is Boris Johnson’s inability to make the right decision at the right time. Adam Marshall, the boss of the British Chambers of Commerce called Tier 4 restrictions “unconscionable without a more comprehensive package of support”. The government, or more to the point Rishi the Offshorer, has not addressed “the economic consequences of its actions.” Marshall went on to accuse the government of throwing British firms into further “chaos” – just days before Christmas having bought in billions worth of stock.

This government has taught the business community a lesson though. Instead of doing dodgy deals, overpaying fatcat CEO’s, wasting money on share buybacks or levering unsustainable debt loads – investors need to reward companies for resilience in these times of tempest. Looking forward, they need to defend themselves from this unstable, irrational, incoherent – and most of all unpredictable government. They all now know what Johnson meant when he said ‘fuck business.‘ because it appears they truly are “fucked” by the only promise Johnson has kept so far.

In the meantime, does it surprise anyone that British gardeners and stonemasons tending overseas cemeteries of the nation’s war dead face losing up to half their income as a result of a Brexit ultimatum given to them by the Commonwealth War Graves Commission? And just as the ports present the nation with logjams, masses of increased red tape and failed IT border systems – it dawns on those that be, that we import from the EU ten times more fruit and veg than we import. And three times more meat, and two times more cereal, dairy, eggs, fish, animal feeds, oils, sugar and so on. This is where Archbishop Rees-Mogg’s plan for starving the less well off really pays off. He’ll end their misery years before their time.

In a no-deal Brexit, sheep and barley farmers will be wiped out in WTO tariffs. To be precise – beef would face a tariff of up to 85 per cent, lamb 62 per cent, barley 51 per cent and cheddar cheese 44 per cent. In true style for this government – George Eustice, the environment secretary, angered sheep farmers when he suggested they could switch to producing beef – themselves facing financial armageddon. The consequence in this comedy of Brexit errors is the Department for Environment, Food and Rural Affairs is now forced to top up the incomes of farmers – that the treasury had not budgeted for. It only runs into a few billion here and there – for decades. So no worries.

It is also true to say that this government, incompetent as they are – truly are letting any opportunity turn into a crisis.

For instance, we should salute the Tory party and Prime Minister for its latest wheeze. Having appointed another 16 taxpayer-funded peers to the House of Lords after promising to reduce it to 600, there are now 830 of them – 200 more than the Commons. And Boris Johnson was yet again accused of cronyism after overruling an independent commission to nominate a peerage for a disgraced Tory donor embroiled in a cash-for-access scandal. But then again – it’s unreasonable to expect morality to play a part in governing the country nowadays. This is a new crisis and it will end badly if this trajectory continues.

Yesterday, America’s CNN headlined with -“Boris Johnson has led Britain into an abyss of overlapping crises at the worst possible time.” And it blames Johnson and the Tories. Even they can see the trouble we’re in – and that’s from a country ravaged by hate, division, polarization, violent crime, escalating inequality, 40 million in poverty and half a million homeless.

This comedy of errors is not funny – nor are the consequences of the script the actors adhere to. Leaving aside tribal loyalties, 2021 should be the year of campaigning to rid ourselves of this rancid, corrupt, rotten government who are trashing every semblance of our national identity and reputation and crushing the future prospects of the generations that follow.