Evidence – Novichok Delivery System Patented in The US 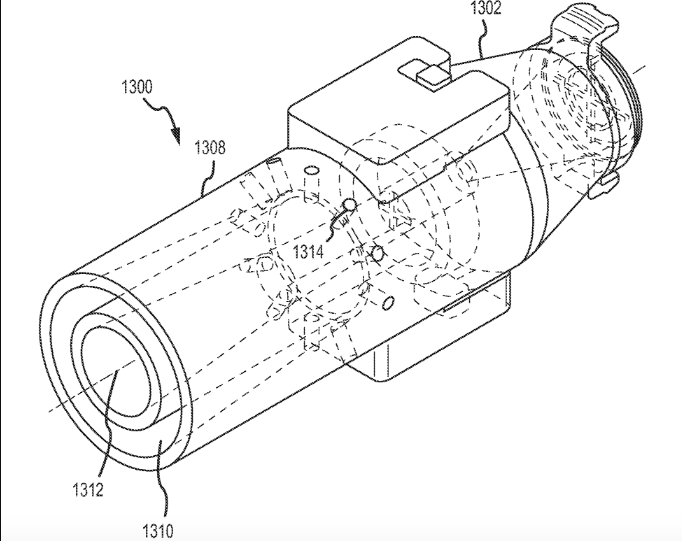 By TruePublica: We wrote back on 9th April that: “The Skripal Novichok poison affair has fooled almost no-one with a slightly questioning mind and an internet connection. The entire story would make an epic egg-on-face Inspector Clouseau classic worthy of Peter Sellers at his best. The plot includes a delusional Russian despot attempting to assassinate an ageing retired ex-spy in Britain where the end result was an international scandal, a dead cat, two starved guinea pigs and a lot of unemployed diplomats.”

The Porton Down scientific findings only went as far as to say: “Blood samples from Sergei Skripal and Yulia Skripal were analysed and the findings indicated exposure to a nerve agent or related compound. The samples tested positive for the presence of a Novichok class nerve agent OR CLOSELY RELATED AGENT.

Theresa May, Boris Johnson, politicians from all tribes along with the false mouthpiece of the establishment – the mainstream media – unquestioningly supported the case for dragging the UK into the centre of a global crisis, just as they did when Tony Blair blatantly lied to the world and supported the Americans in creating the human hellhole that much of the Middle East now represents.

The evidence provided to a more critically minded public was little more than dubious accusations supported by ambiguous expressions such as “highly likely,” and “suspected” – forcing the government into the highest propaganda mode we have seen in over a decade. The lessons that should have been learned from the Chilcot Enquiry, that actual evidence is needed prior to acting – completely ignored by all.

Journalists such as The Guardian’s Johnathan Friedland is a perfect example: He refers to those who critically ask questions about the famed White Helmets, the chemical weapons attacks in Syria or the Salisbury Novichok attack with a rushed asthmatic certainty that everyone is a conspiracy theorist without even as much showing any evidence to the contrary:

“That claim, which has been repeatedly debunked, was instantly applauded and spread by the same crowd of pro-Russia voices on the far left and far right who have served so dutifully as Assad’s online cheerleaders. To them, Waters was a hero for daring to speak an unpopular truth. For everyone else, a once admired musician had joined the ranks of conspiracist cranks and apologists for a murderous dictator.”

People like Friedland have completely ignored the actual evidence provided by Robert Fisk, the Independent newspaper journalist with 40 years mid-east experience that there was no chemical weapons attack in Douma. He has ignored ex-ambassadors such as Peter Ford and Craig Murray, with huge experience in these regions.

Friedland wrote in 2003 – “that war (Iraq) is needed to topple a cruel tyrant who has drowned his people in misery. In this view, the coming conflict is a war of liberation which will cost some Iraqi lives at first, to be sure, but which will save many more. It will be a moral war to remove an immoral regime. To oppose it is to keep Saddam in power.”

A million innocents lost their lives, millions more displaced and Iraq has since sided with Syria, Iran and Russia because of this type of absolute slavish devotion to those who turned out to be mass genocidal murderers.

As ever though, deliberately overlooked or more likely ignored was that Russia had submitted evidence that the Novichok nerve agent was produced and patented in the United States as a chemical weapon in 2015, Russia’s Permanent Representative at the Organization for the Prohibition of Chemical Weapons (OPCW) Alexander Shulgin said this some two weeks ago. That information just washed over the heads of his counterparts and the media while they looked the other way. 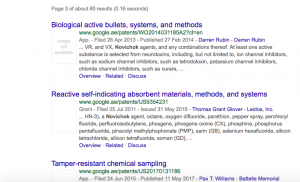 Search Google.patents.com reveals dozens of patents in the USA with Novichok involved

We were not satisfied with Russia’s story on the basis that they would, of course, defend themselves regardless of the truth, so unlike everyone else we looked. Half an hour later we found over 80 patents of the 140 that Russia said were applied for. The ones we found revealed the word Novichok in 81 patents as part of the patent document filing in the United States.

This doesn’t mean that all patents actually involved the nerve agent itself, but it does suggest that this deadly substance is at least available, particularly as none of these patents go back further than 2002 and some were applied for as recently as 2016 and one we found was granted as late as last November.

Without delving that deeply, due to time constraints, we found several patents of particular interest. The first is entitled:

This document states the patented bullet-like projectile – may or may not cause a wound depending on its material manufacture and can deliver all manner of poisons, viruses and substances that can kill or maim.

“The projectile as set forth in claim 1 wherein at least one active substance is selected from nerve agents, including, but not limited to, organophosphates , such as G-agents, including tabun (GA) , sarin (GB) , soman (GD) , cyclosarin (GF) , and GV, V-agents, including EA- 3148, VE, VG, VM, VR, and VX, Novichok agents, and any combinations thereof.“

The assumptions one can take from this patent is that A) Novichok can be manufactured in the United States and B) there are a number of delivery methods, one of which is specifically designed to hit a single desired target. Not forgetting this is an invention of the USA.

Other methods of delivery where the Novichok nerve agent are specifically mentioned as part of the patent documentation is a Powder Dispersion Device and Reactive Absorbent Materials filed in May 2016.

Contrary to what we have been told about the deadly nature of Novichoks, there is a Nerve Agent Antidote patent filed in 2013 that was granted 14th November 2017. Another is for methods of detection and another for protection against the neurotoxin Novichok.

Why would so many patents be filed in the first place (in America) if there had never been any intention of their use?

There is more to come on this story – for sure.