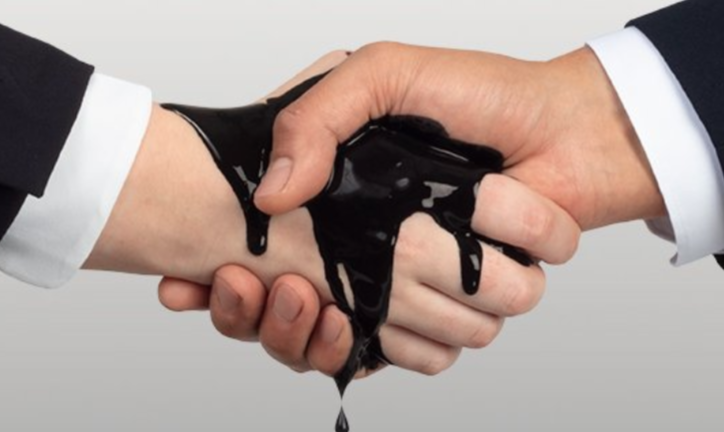 By Robert Woodward – TruePublica: In 1999 I was working for what they call today a systemically important financial institution and as part of my role was tasked with high-level monitoring of money laundering operations working in cooperation with the then National Criminal Intelligence Service (now the NCA). The team was the largest for the financial sector in the UK and its role was to actively seek out money laundering activities in our institution. It was an eye-opener. I had worked in the property and finance industry for over 20 years, was aware of the laundering process but not the sheer scale of it.

In 2017, I met with a representative of Transparency International to challenge their published research that suggested that Britain was one of the least corrupt nations out of 180 in their Corruption Perception Index. The 2018 report gives an even cleaner bill of health, which, in my view is preposterous.

Transparency’s chair says – “Corruption is much more likely to flourish where democratic foundations are weak and, as we have seen in many countries, where undemocratic and populist politicians can use it to their advantage.” The trouble is in the title – ‘perception’ – nowhere near what we really need, which is reality.

Since 2016, the current director-general of the NCA is Lynne Owens and I doubt she believes Transparency’s view either when the home page of the NCA website states – “the scale of money laundering impacting the UK annually is in the hundreds of billions of pounds.”

It was obvious in the property industry when acquiring residential units for respectable household named corporate clients that we were constantly competing against unknown buyers, themselves hidden from view via ‘consultants.’ Armed with tens of millions to acquire suitable property to build a portfolio in places outside of London like Birmingham and Leeds, I was more often than not outbid – mostly with bids that were financially impossible to get basic returns from. These buyers were looking to ‘park’ money through large scale money laundering operations, facilitated by the London ‘financial services’ industry with money acquired from all sorts of heinous crimes.

So bad is the situation, that a 2018 survey of the building industry in Britain found 97 per cent of property builders worried about being targeted by sophisticated money launderers with 47 per cent even admitting that they had been victims of it.

This week, we see yet more evidence that the City of London is the main driver of money laundering across the planet in the form of a new report by the Tax Justice Network. This organisation has done an excellent job of persisting with its cause – to highlight illicit money laundering and tax evasion that hurts everyone except a tiny minority across the world.

The TJN reports of the decades of tax wars among the world’s richest countries that are unravelling the century-old global corporate tax system. It finds that forty per cent of today’s cross-border direct investments reported by the IMF – $18 trillion in value – are being booked in just 10 countries that offer corporate tax rates of 3 per cent or less.

The Corporate Tax Haven Index, published by TJN, has identified the UK and a handful of OECD countries as the jurisdictions most responsible for the breakdown of the global corporate tax system – with the UK bearing the lion’s share of responsibility through its controlled network of satellite jurisdictions.

The research captures a global corporate tax war waged by the UK through its network of satellite jurisdictions across the world. The data also reveals an aggressive annexation of low-income countries’ tax rights by the UK and OECD countries including France and Sweden.

The top 10 most corrosive corporate tax havens in the world

The Corporate Tax Haven Index complements the Tax Justice Network’s Financial Secrecy Index, which ranks countries by their contribution to global financial secrecy with a focus on individuals, as opposed to multinational corporations.

The top 10 countries that have done the most to proliferate corporate tax avoidance and break down the global corporate tax system are:

These 10 jurisdictions alone are responsible for over half (52 per cent) of the world’s corporate tax avoidance risks as measured by the Corporate Tax Haven Index. Over two-fifths of global foreign direct investment reported by the International Monetary Fund is booked in these 10 countries, where the lowest available corporate tax rates averaged 0.54 per cent.

The top three ranked jurisdictions are part of the British-controlled network of satellite jurisdictions to which the UK has outsourced some of its corporate tax havenry.

World Tax War: The UK is responsible for over a third of the world’s corporate tax avoidance risk

The Corporate Tax Haven Index documents a corrosive corporate tax war waged by the UK against the ordinary citizens of rich and poor countries through a network of satellite jurisdictions to which the UK has outsourced some of its corporate tax havenry. While the UK ranks 13th on the index, its Overseas Territories and Crown Dependencies dominate the top of index. The British Virgin Islands, Bermuda, the Cayman Islands and Jersey ranked 1st, 2nd, 3rd and 7th respectively. Bahamas, a British Commonwealth territory, ranks in 9th.

That’s four times more than the next greatest contributor of corporate tax avoidance risks, the Netherlands, which accounts for less than 7 per cent.

Nearly 14 per cent of foreign direct investment reported by the International Monetary Fund – over $6 trillion – is booked in the UK network, where the lowest available corporate tax rates averaged 1.73 per cent.

Of the 10 jurisdictions whose tax systems received the highest corporate tax haven scores for enabling corporate tax avoidance, 8 are part of the UK network: the British Virgin Islands, Bermuda, the Cayman Islands, the Isle of Man, Turks and Caicos, Anguilla, Jersey, and Guernsey.

In addition, Britain is a leader of the world’s most aggressive countries in terms of driving down other countries’ withholding tax rates through treaties.