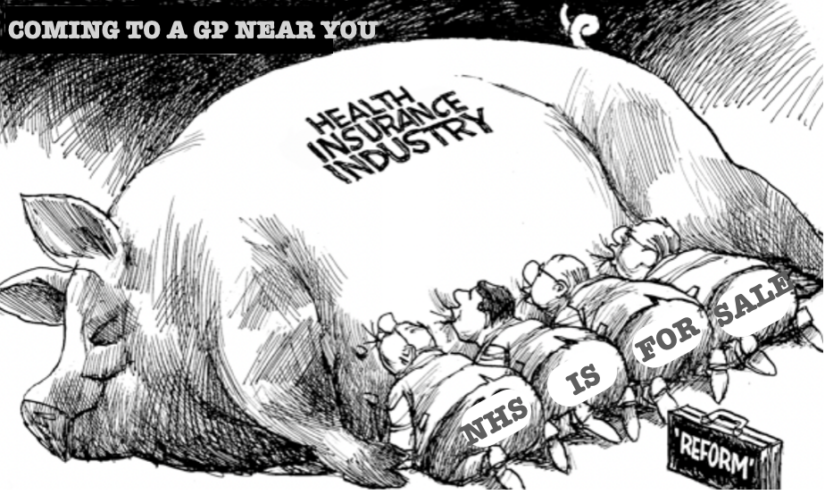 By Rob Woodward – TruePublica: You know that the Tories are ideologically opposed to the NHS. You know that they have spent years undermining it as an institution and you know that if they had their way – private medical healthcare insurance, just as it is in the USA would be the route they would go. It would make additional millions for those who enabled it. And as almost a quarter of Tory MP’s have worked as lobbyists for healthcare companies and dozens have personal financial interests in them, the Covid crisis will provide ample cover to ensure they edge closer to that goal with little news coverage. And so, it has come to pass.

The boss of a firm that seized control of 50 GP practices in North London with half a million patients with deep connections to an American healthcare provider is to quit that company for a new role as … deep breath … Boris Johnson’s top health adviser in No 10 Downing Street.

Samantha Jones is leaving Operose Health Ltd, which is owned by the US health insurance giant Centene Corporation. Overnight, with absolutely no public debate or parliamentary scrutiny, the company became one of the UK’s largest primary care services providers.

Not only that – Centene Healthcare has a special entry in the USA on the government oversight’s Federal Contractor Misconduct Database.

In 2016, Health Net was acquired by Centene Corporation. It has an enviable record as one of the most corrupt healthcare companies in the country with dozens of instances of misconduct – including illegal denial of healthcare coverage, underpaying claims, discrimination, more fraud and unfair and deceptive business practices to name but a handful. These 35 fines alone, imposed upon Health Net add up to a whopping $701 million.

Last year, this same company was being sued for being “engaged in practices that are in violation of the Racketeer Influenced and Corrupt Organizations Act (source).

Only last month, Ohio state filed a lawsuit claiming that Centene Corporation engaged in an elaborate plot to maximize profits at the expense of its Medicaid department to the tune of millions of dollars.  “Corporate greed has led Centene and its wholly-owned subsidiaries to fleece taxpayers out of millions. This conspiracy to obtain Medicaid payments through deceptive means stops now” (source).

In addition, Centene has recently had its database hacked with a large number of private health records being raided (source) and six months ago, a federal court found it had “wrongfully and intentionally underpaid frontline doctors (source).

I could on and on here. The reality is that Centene Corporation has effectively grabbed a big slice of the UK’s healthcare industry without so much as a whimper from the general public. One of the most corrupt healthcare corporations in existence now has a seat at the top table in Downing Street.

“Major changes are being pushed through, making it easier for US and other corporations to take control of our health services. This is all being done under the cover of Covid and with no scrutiny by parliament.”

Half a million registered patients in North London were unaware that a US corporation had taken over their surgeries. Ms Jones became chief executive of Centene UK, the former name of Operose Health, in 2019 after working in senior roles in the NHS.

Shirley Franklin, chairwoman of the Defend The Whittington Hospital Coalition, said: “We want our government to be advised as to how to prioritise NHS health care, not how to exploit our health needs to line the pockets of American shareholders.”

A “Get Centene Out” group has been formed and has agreed to hold a protest outside the offices of Operose Health in New Cavendish Street on April 22.

In the meantime, The UK government is also being sued for selling critical NHS database to a foreign power – namely the ‘controversial American spy and surveillance company at the heart of the Cambridge/Analytica, Facebook, SCL Elections Brexit scandal.