Opportunity or Race to the Bottom? 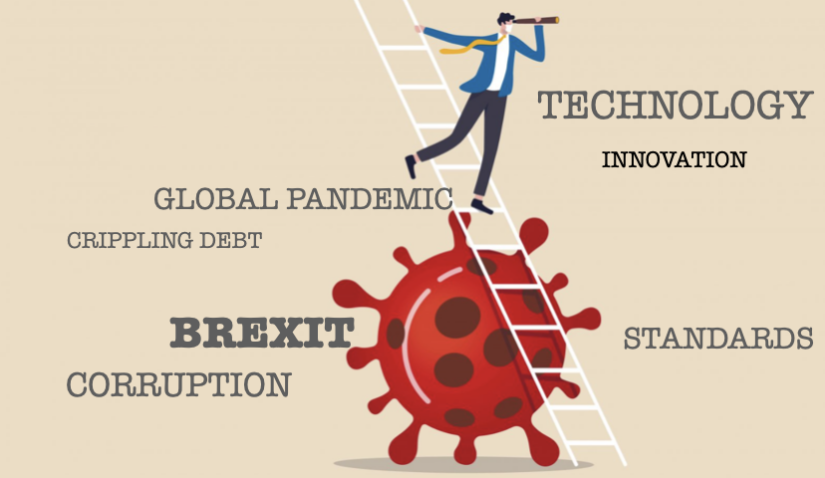 Let’s not forget what really happened. It was former Prime Minister David Cameron who recklessly gambled the future of the United Kingdom in order to contain some rampant right-wing whingers. It led to a politically toxic and divisive atmosphere where an opportunistic Boris Johnson, who merely attached himself to the Brexit bandwagon, arrived at the high office of Prime Minister. It is here – that the world has witnessed in real-time the unharnessing of British values and the rise of mendacious self-serving political hustlers who have shamelessly corrupted everything they have turned their hands to.

And this is confirmed by results. Britain’s performance to date, in the midst of a pandemic, according to Our World in Data (at the time of writing) – is the world’s third-worst economic downturn behind Spain and Peru and the second-worst death toll in Europe.

The result so far is that the so-called British ‘political elite’ on the right are now fighting what looks more like a public relations warzone, more than focusing their efforts on a deadly virus and a recession like no other.

Structural elements won’t go away in the immediate years ahead. The most recent polls now state that if a referendum took place tomorrow with the same in/out Brexit question – just 39 per cent would vote for it – heavily outweighed by a no vote of at least 10 per cent. ‘Remainers’ continue to live in despair – as if stranded after the last bus left a minute ago just before midnight. Leavers continue to both gloat but shrink in numbers. With Covid – just 31 per cent of the public have confidence in the way the government are handling the crisis – a catastrophic fall from 72 per cent ten months ago. The public knows Britain is in deep trouble.

There is nothing wrong with capitalism – but it was Thatcher’s economic policy that eventually got out of hand that drove us to where we are. The ‘trickle-down’ effect they promised was a mirage for the vast majority. A system of wealth extraction was developed. A very large part of the problem was the off-shoring of jobs back in the 1980s and 90s and the ever-growing gig economy of the noughties. The shift between the two meant a working-class man could support his family in the 1980s but can barely put a roof over their heads today. Brexit was, if anything, a rejection of this failure.

The consequence is that in the last four decades, Britain became a low-productivity economy. Since 2010, it has topped up its GDP by privatising just about everything it owned and flogged taxpayer-owned assets to foreign investors and falsely claimed the economy had recovered from the bank-led financial crisis that politicians allowed to happen in the first place. In another deception, the ‘economic miracle’ that George Osborne claimed to have orchestrated – the national debt rose from £1 trillion in 2010 and continued to £1.8trillion by the end of 2019, before the arrival of Covid.

This failure of economic ideology has allowed the financial services industry, much of which pivots around the facilitation of money laundering for despots and oligarchs to flourish in place of manufacturing. It left whole swathes of the country bereft of wealth. It has allowed unprecedented amounts of obligated taxes to be hidden from the treasury (at the expense of the public) and seen property prices soar in the Laundromat that London has become – now the world’s biggest launderer of illicit money. In a post-Brexit world – the City of London needs no assistance – it can look after itself. And although this industry has already transferred £1.2 trillion in managed assets to the EU since the referendum, there has been no mass exodus.

In Britain, national wealth has been falsely created by inorganically ramping up house prices through state-sponsored market interventions that created a housing crisis. Once again, this has come at the expense of the taxpayer. There’s a very simple way to stop this – peg house price growth to wage growth and dispense with so-called ‘affordability’ multiples of income. It’s a racket.

All in all, Britain is in poor shape. This is why we have Brexit – nothing more than the scapegoat of the political and economic failure of successive governments. And not only were we not ready or capable to handle Covid – we’re falsely being told the money has run out. In the four decades from 1920 to the end of the 1950s – Britain’s national debt averaged 165 per cent of GDP. Today it is 101 per cent and we are to expect a tax raid on pensions, homes and other assets.

Having left the EU, with no-one else to blame – this government has nowhere to hide but behind the wall of its own lies. However, any an examination of their deceit will be smothered.

Just look at how the government was accused only last week of trashing parliamentary scrutiny of the Brexit trade deal after Jacob Rees-Mogg ordered the shutdown of the cross-party committee examining Britain’s relations with the EU. This insidious move silences a promised six-month inquiry into the Trade and Cooperation Agreement (TCA), designed to scrutinise the key players in televised evidence sessions at parliament. The inquiry report was designed only to assess the merits and flaws of the deal in rigorous detail. Shutting it down is confirmation they had much to hide. It is an act of a dictatorship, not parliamentary democracy in action. And there’s nothing we can do about it.

Look also at their promises to uphold the highest food standards with Britain’s agriculture. Just 8 days into Brexit and a pesticide so poisonous that it is banned by the EU has been given the green light in England, the government has announced. George Eustice, who euphemistically has the job title of ‘Environment Secretary’ has agreed to let a bee-killing product containing the neonicotinoid thiamethoxam to be used. It is as contemptuous and cynical as anything. There will be a lot more of this type of news over the coming months and years.

Rise to the top or race to the bottom?

The opportunity that Brexit brings is seemingly limited but with the resetting of the world economic order as a result of a pandemic, there are great possibilities. Unshackled from what seemed, on occasions, to be a restraining order imposed by the EU, Britain could flourish if only it knew how. They now have all the levers of power at their disposal that could benefit the entire country and pull Britain out of the impending car-crash that 2021 and beyond offers.

But Boris Johnson has once again, opportunistically homed in on a problem that has festered in Britain for decades, without actually knowing what to do. Levelling-up the north is his big plan but having seen it, Northern leaders have already dismissed the plan as having no tangible detail worthy of discussion. It’s about as honest as David Cameron declaring he was going to fix ‘broken Britain’ – a Britain that wasn’t actually broken until he did just that.

It is true that the EU is slow, cumbersome and becoming more belligerent. In the last 20 years, growth in the EU has been 24.4 per cent – by contrast, the US has seen growth of 42 per cent and the UK’s 34.3 per cent. The EU’s most recent announcement of a trade deal with China is a geopolitical disaster and one that it will regret. Thankfully, Britain will not have to acquiesce to Chinese trade policy, given its appalling human rights abuses, democracy bombing of Hong Kong and highly suspect handling of a virus that crippled the world – to its overall benefit.

Britain is now in the driving seat of its own destiny. It can rechart its journey with its own rules on goods, services, people and capital. And just as Thatcher came with a new ideology that crushed manufacturing and replaced it with ‘services’ – Britain could focus its efforts at the new world of technology and innovation. It might even be possible to exploit what it invents and enrich itself whilst regaining its former reputation for inventiveness. This would a huge boost to a heavily dented ‘global Britain.’

Britain now needs to completely rebuild itself for the modern world. The Covid crisis has proved Britain can move more quickly when it comes to financial and public health policy. It has also proved what having incompetents at the wheel can do.

However, right now, HMS Brittania is in a storm and heading for the rocks. Covid related deaths are shocking. By April, something like 100,000 Brits will have passed to the great unknown too early. Many more will be permanently heading towards ‘long Covid clinics.’ The economy will be in pieces, businesses crushed and unemployment will soar. If Brexit is such an opportunity – why have we not been told what the grand post-Brexit plan is?

The reality is that this unshackling of the regulatory framework that the EU imposed really only does one thing. The easy option is a race-to-the-bottom economy with slash-and-burn deregulation, becoming the Singapore-on-Thames of Europe, where inequality could rocket off. The lack of transparency demonstrates that. The unleashing of banned pesticides into our food chain demonstrates that.

There is an opportunity if only we could grasp it. But first, we have to recognise what we are dealing with – a political class where urbane selfishness, corruption and malfeasance pays off with impunity.