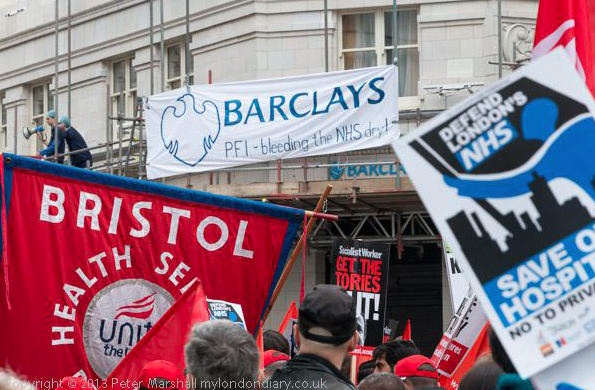 By Craig Murray: Here is my personal experience of the great push for the public sector to use the Private Finance Initiative. When I was Deputy High Commissioner in Accra, the British government was paying a very large sum to rent over 80 residential properties in a city where rents are very high for quality properties. However the British government owned a lot of land there, and it was an obvious saving to build our own residential compound.

We accordingly drew up plans and got quotes, which were submitted to the FCO with details of the very substantial savings from the medium term. The response was that we had to invite private sector bids for a PFI scheme. This amounted to no more than asking the companies who had already submitted construction bids to submit pre-financing and maintenance plans. Needless to say this increased costs very substantially.

But here is the kicker – in comparing the “build it ourselves” plan with the PFI plan, we were instructed to give an 8% cost advantage to the PFI scheme – the “public sector comparator” – to allow for the extra efficiency of the private sector. No matter we were comparing real costs to real costs, somehow magically an 8% saving would accrue from using the private sector, in a manner the Treasury refused to define. I simply shelved the whole scheme in disgust, but I understand this “efficiency saving” allowance was a standard feature of the PFI scam.

The vital thing to realise about PFI is that it was not the construction companies – such as Carillion – who stood to benefit most. It was the bankers and hedge funds who financed the schemes and stood to rake in decades of high and taxpayer guaranteed interest payments. The fundamental craziness of the entire scam is that in effect the public sector was still borrowing the money, but at significantly higher interest rates than if it had been financed the normal way through Treasury bonds.

As the scheme was at heart a massive diversion of taxpayers’ money to the bankers, it should come as no surprise that Gordon Brown was the driving force behind it. My personal experience of it, which I found disgusting, was during Brown’s tenure of the Treasury. Why Brown is still treated as some sort of guru by the media, when he has caused such immense and demonstrable harm, is an example of the desperation of the media to maintain the neo-liberal “consensus”.

There is no doubt that the people are stirring and increasingly unwilling to accept the gross and fast widening wealth gap in a society entirely skewed by its legislative organisation to the interests of the small number of the ultra wealthy. In the interests of self-preservation, the corporate and state media have been forced to allow the Overton window to drift very slightly left. Nationalisation and wealth taxation are no longer entirely taboo subjects, while Theresa May feels the need to make insincere promises to initiate token measures to restrain boardroom greed. But the blighted prospects of a generation, and the increasing financial struggles of the middle classes, have not yet produced a concomitant political reaction. I have never been so struck by the irrelevance of the witterings of the Westminster classes to the life experience of ordinary people.

It remains my view that Independence for Scotland – and for Catalonia – are part of the radical shake up of the political system required to make democracy meaningful again. The recent moves by the Scottish government on welfare protection, for example to ban the involvement of private companies in health assessments, gives me some comfort in that view. But the situation calls for a politics more radical than Corbyn or the SNP have yet dared to propose. Society now needs a fundamental redistribution of wealth. Parodoxically, the fact that so much wealth now consists in notional transactions rather than physical goods, makes this an easier task than when the classic philosophers first addressed it.