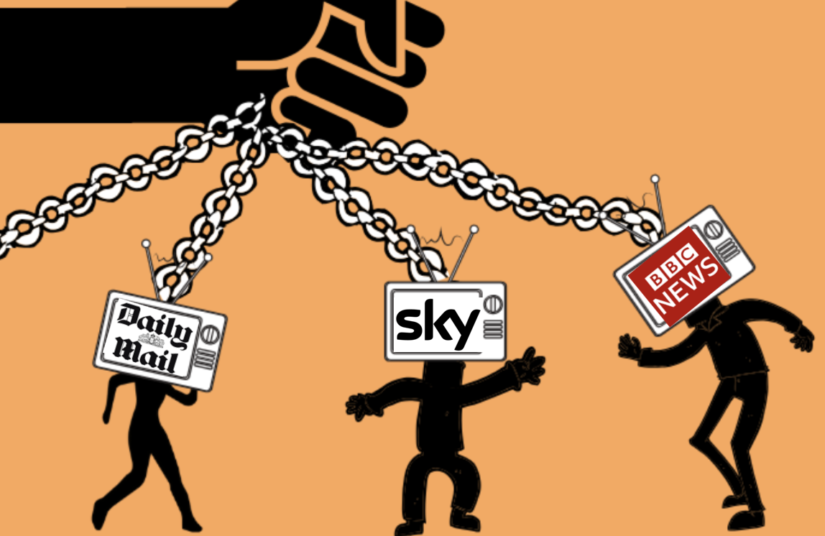 By TruePublica Editor: Last Sunday – Aubrey Allegretti, political reporter for Sky News has his article published with the headline – “Coronavirus: ‘Not responsible’ to reveal lockdown exit plan – and no vaccine this year, says foreign secretary.” It was essentially a story parroting nonsense from Dominic Raab. The first paragraph read – “The UK is in a “delicate and dangerous” stage of the coronavirus outbreak and it is “not responsible” to lay out how the lockdown could be eased, Dominic Raab has said.”

I think most rational people would agree that it is indeed the job of government to lay out how the lockdown could be eased. Unless Raab is waiting for further instructions, of course.

It would be fair to say that Raab knows the handling of the COVID-19 crisis is a much bigger crisis because of the grievous handling of it by his party and their laissez-faire attitude towards the economy first and the general public second. It fits with the entire ideology of the current Tory party world vision – an economic system where the individual is the basic unit in society that has a natural right to freedom and is self-regulating both himself and the wider economy.

The truth is that Raab is merely ducking the responsibility and duty of his job because ‘laissez-faire capitalism’ has been dramatically shown to collapse in times of crisis. One only has to look at the taxpayer-funded bailout of the workforce and their employers to see that.

But then what else do you see in this same article by Sky News. Is this sentence not truly alarming – “The government is also coming under intense pressure from senior Tory donors to relax the strict social-distancing measures, amid concern at the damage they are doing to the economy.”

This admission, that government policy, in the midst of a full-blown crisis that has already killed more than 40,000 people (incl care home and at home deaths)  and plunged the country into the deepest recession since the First World War, is being guided by corporate donors only goes to show just how dangerous it is to have corporate donors in the first place.

The very definition of laissez-faire capitalism is that “corporations are creatures of the state and therefore the citizens must watch them closely due to their propensity to disrupt the Smithian spontaneous order.”  Sky News is just one part of that cog that propagates this extreme form of capitalism and is preparing its audience to accept it unquestioningly when we emerge from the dark shadow of the COVID-19 catastrophe.

Raab goes on to say that they are ‘sticking to the scientific advice – to make sure that we are prepared in due course for the next phase.” Firstly, they have not stuck to the scientific advice at all, if they had the C19 death rate would be much lower and secondly if all else fails, they will blame the scientists (pretty much as everyone was told by these same people to not trust ‘experts’ in the Brexit debate) anyway.

Not a single word of criticism. It is flagrant and shameless flannel – little more than sycophancy dressed up as journalism. 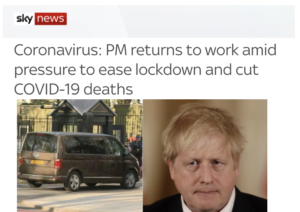 On Monday, Jon Craig, the chief political correspondent wrote an article published on Sky News that was one of the very worst pieces of blatant propaganda I have ever read. First paragraph reads – “Boris Johnson will plunge into a hectic round of back-to-back meetings on coronavirus on his first day back in Downing Street after his life-threatening illness.”

Craig goes on to say that the PM faces “massive decisions on the government’s next moves to stamp out the virus” that Johnson will be chairing the “war cabinet” is “eager” to return and all this “provided his doctors give the go-ahead.” These words are deliberately designed to bring forth images of a Churchillian leader fighting tooth and nail for the safety of his people.

As if this nonsense wasn’t enough Craig goes on to cheer the ‘people’s prime-minister’ by saying – “After spending the past fortnight at Chequers, Mr Johnson arrived back in Downing Street with no fanfare. There was no motorcade, limousine or motorcycle outriders as he made a low-key return in a people carrier.”

It still doesn’t stop. The PM is “excited” to take “personal charge.” All this fawning adulation by Sky News continues with: “Allies claim he has “got his bounce back”, a fortnight after a stay in hospital which he claimed “could have gone either way” and prompted him to thank NHS doctors and nurses for saving his life in a video message. Ministers are said to be delighted that he has returned so swiftly after his illness and Tory MPs will be relieved that Mr Johnson is back in control after claims of a power vacuum at the heart of government while he was away.”

Reading further, it is clear that this article, the main featured headline of the day for Sky News is designed to fully support Boris Johnson and sidestep his dreadful handling of the crisis from day one. Not a single word of criticism. It is flagrant and shameless flannel – little more than sycophancy dressed up as journalism.