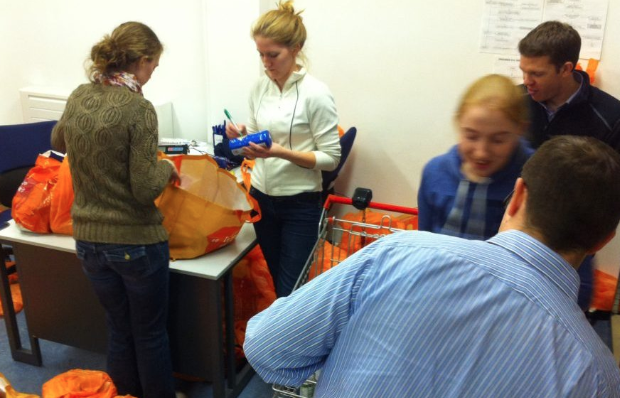 By TruePublica: Food bank use has soared at a higher rate than ever in the past year as welfare benefits fail to cover basic living costs, the UK’s national food bank provider warned six months ago. But as Universal Credit approaches, a school prepares by opening its own food bank.

In the year to March 2018, 1.3 million three-day emergency food supplies were delivered to people in crisis across the UK – a 13 per cent increase on last year. This marks a considerably higher increase than the previous financial year when it rose by 6 per cent.

Low income, debt, household bills and delays in benefit payments were the main reasons for referrals. The fastest growth rate reason for referrals though are changes to benefits defined as “reduction in benefit value.”

Universal credit has been identified as a significant factor in the rise in food bank use. The Independent reported that:

“Analysis by the Trussell Trust of food banks that have been in full universal credit rollout areas for a year or more shows they saw an average increase of 52 per cent (in the use of food banks) in the twelve months after the full rollout date in their area, compared to twelve months before. Food banks that are either not in full universal credit areas, or only in full rollout areas for up to three months, meanwhile showed an average increase of 13 per cent.”

Universal Credit continues to be a flagship social policy of the current government, and there is no doubt it is causing additional unnecessary hardship for those in need. The rise in food bank use is directly correlated to the arrival of the Conservatives in 2010.

Exactly one year ago, the Trussel Trust estimated that half of children making use of food banks are primary school age and that between 2013 to 2015 food bank use had risen by 29 per cent. Today, the unfolding public health crisis has just arrived inside our schools.

Welfare Weekly has reported that a school in Middlesbrough has launched its own “pop-up foodbank”, over fears that the introduction of Universal Credit in the region will leave children hungry as parents are made to wait several weeks for an initial payment.

Craig Wright, assistant principal of the Outwood Academy, told TeesideLive: “We will be launching a pop-up foodbank to coincide with the roll-out of Universal Credit.

“We know that Universal Credit will affect our families in our community and the six-week wait especially will mean lots of our families will suffer in that time with a lack of resources. We’re launching a pop-up foodbank which will help to meet their needs in whatever way we can.”

The school currently teaches around 700 pupils, 65 per cent of which are from low-income families and eligible for free school meals.

“We don’t want hungry children. We hope that we can get as much support as possible.  We just genuinely want to make sure that the children of this Academy and the children of our local feeder primaries as well are fed throughout the time when money is going to be a significant issue to many.”

She added: “Our concern was we will have families with no provision for potentially six weeks. This is about our community.

“Everything we do is about sustainability, our day-to-day work is about raising children’s aspirations.”

In Britain today, we have rising poverty in all areas of its measurement. This is particularly hard on children where outcomes in later life are increasingly identified as adding to a precarious existence.