Squalid London – Our Own Swamp 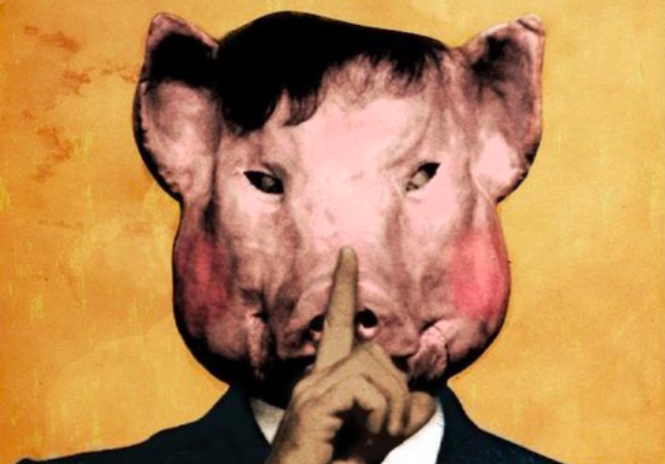 By TruePublica: As HMS BrexitBrittania looks ever more likely to head in the same southerly direction as mothership Titanic, there is one backstop where all parliamentarians can agree – The City of London, often referred to as Britain’s second empire, must be saved at all costs.

The somewhat right-leaning Economist magazine even ran an article amongst the many that litter the financial pages of those that care to look just a week ago, that roundly aimed its cross-hairs at Britain’s own swamp of bottom feeders – the bankers and their armies of facilitators that inhabit The City of London – all supported by Her Majesties own territories of tax havens.

In the same week that, according to a British report, 18 of the 20 leading European banks, including four French ones, have already been sanctioned for money laundering offences we also find out that – “almost every big cross-border corruption case in recent years has had a connection to Britain or its palm-fringed overseas territories.”

For instance, it appears that British limited-liability partnerships were the vehicle of choice for suspicious clients of Danske Bank, which is embroiled in the laundering of as much as €200bn ($230bn).”

The reason why London is so important is that it is the centre of the world’s money laundering operations. But you knew that. The trouble is, so does everyone else.

With all the Russian money sloshing around London, you would think that Theresa May, who has made such an effort to deflect all of her problems by blaming new convenient bogeyman Russia that seizing their assets in London including property, cars, art, wine and cash would, far from inflicting any damage to the economy, be useful to the treasury who is about to clobber the taxpayer to pay for the end of austerity. Or fund the NHS shortfall. Or social services, housing crisis, elderly care crisis or indeed, just a general end to the crisis of daily life that the banks bought to one-third of the entire population in the first place.

In 2016, Britain became the very first G20 country to launch a public register of companies’ beneficial owners. Hooray, I hear you say, some proper action of accountability at last. It was designed to shed light on the shell companies behind which wrongdoers often hide – like the aforementioned Danske case. But hang on a minute – the system relies on self-reporting. And, if Mr Oligarchovich does get caught red-handed by shopping himself in a rare fit of morality, the fines are, wait for it, drumroll ……… about £1,000. Mr Oligarchovich can be fined that for forgetting to pay for a TV licence. Fines like that, as The Economist says “makes the British Virgin Islands look robust.” Inevitably, therefore, the honest comply and criminals lie.

Should it be any surprise that under Theresa May’s watch as Home Secretary that we let in so many of these corrupt Russians in the first place? In fact, today the second highest number of visas given for what they call ‘tier 1’ investors – those that can pump £2m into government bonds or other UK invested assets, are Russians. So after laundering billions of ill-gotten gains through the London banks, they can then get visas for their entire family and buy homes in London to protect them from just as or even more corrupt characters in their homeland.

In the meantime, The National Crime Agency, whose responsibility it is to collar these guys has a budget that shrinks every year and leaves them with about a dozen qualified senior investigators – in other words – none. Not forgetting it can take years to bring a single case and even if they do, they face Mr Oligarchovich’s lawyers in the Old Bailey. He’s hired the best that laundered money can buy – unsurprisingly, lawyers from London.

In 2015, the Treasury and Home office admitted that money laundering was so serious that it was, even then a strategic threat to the stability of the nation. The boss of the NCA said that “hundreds of billions of dollars are laundered through UK banks and their subsidiaries each year.” Terror finance is just one of a long list of heinous crimes that The City of London facilitates.

So where is the risk, other than a few oligarchs, terrorists, traffickers or gun runners on the loose in the watches gallery of Harrods? The City of London generates a trade surplus of 3% of GDP and pays roughly ten per cent of the country’s taxes. Britain could lose any part of that if laws elsewhere are changed, which they are slowly doing, especially in the EU and America.

In the meantime, Craig Murray has a word or two about a case of a money launderer, his wife and the City of London.

By Craig Murray: On the face of it, the Unexplained Wealth Order against Zamira Hajiyeva shows the UK cracking down on the torrent of corrupt money that gushes into the City of London every single second. But dig deeper.

Hajiyev’s husband had fallen out of favour with the appallingly kleptocratic Aliev regime in Azerbaijan – a dictatorship whose corruption can be measured by the infallible indicator that Tony Blair is currently working for it. Hundreds of billions have been plundered from Azerbaijan’s oil revenue by the Azeri oligarchs.

While her father was still dictator of Uzbekistan, Gulnara Karimova was subject to seizure of looted wealth and investigation in Switzerland, France and Sweden, among others. In the UK, where she had a home and very substantial assets, no action whatsoever.

What are we to make of Theresa May’s huffing and puffing about the Skripal affair, when the UK’s richest resident is Alisher Usmanov, who is Vladimir Putin’s old flatmate, right hand man in the media and business world and chairman of Gazprominvestholdings? There is no chance whatsoever any action will be taken against Usmanov, who acquired his assets in the most dubious manner imaginable. Usmanov is far too entrenched in the City.

These people interact with the British “elite” in any number of surprising ways. Claudia Winkleman’s husband made big money from producing a vanity film project for the Azeri dictator’s daughter. Former Foreign Secretary Dr David Owen is Usmanov’s factotum in the UK. Just two of many thousands of links that tie the UK’s gilded elite in with the looted wealth.

The Conservative Party has directly received donations totaling over £3 million from Russian oligarchs. That buys a lot of influence. But more important still is the influence of the City of London, where wideboy bankers grow rich on the World’s most sophisticated and “respectable” money laundering operation. While the Tories are determined to bluster us into a new cold war to benefit the military, industrial and security complex, none of the sanctions taken to date and none that will be taken have had any serious deleterious effect on the holders of the hundreds of billions of money looted from the Russian people during the Western mandated and organised privatisation of Russia’s mineral and industrial assets. Even as false rage over Salisbury fills the airwaves, the oligarchs are privately being reassured their money and lifestyles are safe.

And of course, the appalling Saudi Regime can imprison and execute as many dissidents and feminists as it wishes, and western governments and media will still applaud its “modernisation programme”. Western governments will still lust after lucrative arms deals to supply the bombs that blow apart Yemeni schoolchildren. And the Saudi regime can gruesomely murder as many journalists as they wish abroad, with no fear whatsoever of any action against them by the UK.

In a United Kingdom dominated by the cesspit that is the City of London, it is not just that money talks. It is that nobody else is heard.