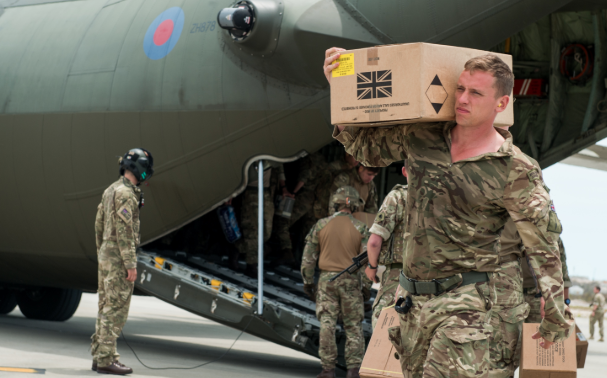 By TruePublica: The Foreign and Commonwealth Office website page makes clear what the objectives of the ‘Conflict, Stability and Security Fund’ are. It states that it: “provides development and security support to countries which are at risk of conflict or instability. It’s the only government fund which uses both Official Development Assistance (ODA) spend and non–ODA spend to deliver and support security, defence, peacekeeping, peace-building and stability activity.” In other words, alleviating the pain and suffering of those in countries experiencing a lack of security as a result of conflict. However, taxpayers are becoming increasingly more annoyed that much of the £1billion a year spent ends up supporting terrorism and human rights abuses.

BBC’s “Jihadis’ You Pay For”

Last December, the Conflict, Stability and Security Fund came into sharp focus after the suspension of £12 million to the Access to Justice and Community Security” (AJACS) program in Syria when questions were raised in the British aid community about the opacity of cross-government funds.

It was a community-based programme, an unarmed policing effort in war-torn northern Syria that was suspended after a  BBC Panorama episode aired claims about corruption and aid funds reaching the hands of terrorist groups.

The allegations relate to part of the program managed by the British Foreign & Commonwealth Office; and implemented by British contractor Adam Smith International.

The BBC investigation, “Jihadis You Pay For,” alleged that ASI — backed by U.K. taxpayer funds — knowingly funded terrorist activities. It concluded that U.K.-funded “development efforts have been undermined by mismanagement, waste and corruption,” leading to concern among many in the aid community that the allegations could provoke anti-aid sentiment among the public.

Since 2011, the UK has provided £2.71bn in aid to the Syrian humanitarian effort. Of this, £38.4m went through the Conflict, Stability and Security Fund to the White Helmets, a freedom of information request revealed in March this year.

This organisation is mired in controversy. “The White Helmets brand was conceived and directed by a marketing company named “The Syria Campaign” based in New York. They have managed to fool millions of people. Walt Disney might have made a great movie about this: unarmed volunteers fearlessly rescuing survivors in the midst of war without regard to religion or politics. Like most other “true life” Disney movies, it is 10% reality, 90% fiction.”

Whatever you believe when it comes to the ‘White Helmets’ – if there is any doubt whatsoever as to their activities in the theatre of war, a war Britain is illegally involved in – they should not be funded by taxpayers.

Mark Curtis, along with Nick Dearden researched and wrote for Global Justice Now a devastating report (HERE) that included case studies of ‘questionable aid projects’ from Sierra Leone, Nigeria, Sri Lanka, Iraq, East Africa and others. It also highlighted human rights abuses in one section entitled “Funding for torture and repression“- and provided examples in Burma, Ethiopia, Sri Lanka, Sudan and other countries.

The report starts with accusations of deliberate dubious involvement clearly stating that the Conflict, Stability and Security Fund:

“is increasingly using aid money to fund military and counter-terrorism projects which do not appear focused on what aid should be about: eradicating poverty and promoting inclusive development. It is funding ‘security’ forces in several states involved in appalling human rights abuses, thus the UK risks complicity in these violations. It is not transparent. Despite some improvements made to the Fund this year, programme details are scant and some appear to be misleading.”

Campaign to close the fund

Global Justice Now has gone one step further in an article last week entitled: “Standing against the Conflict, Stability and Security Fund” – which is now pushing for the fund to be closed:

“On 4 June we handed in a petition from 4,672 UK citizens standing up and calling on Theresa May to close the Conflict, Stability and Security Fund (CSSF).

The fact that thousands of people felt motivated to call for the fund to close, shows that many are fed up with publically funded aid money being diverted from alleviating poverty. Under the CSSF, which is half funded from the aid budget, money is going towards funding security forces across the world, and what’s worse in some cases the fund supports security forces accused of human rights abuses.

UK aid has been in the news over and over again in the last few years. Each and every time, the headlines it garners are for the wrong reasons. All over the world, aid is being misused.

The CSSF is supposed to provide “development and security support to countries which are at risk of conflict or instability”. But given the string of scandals, from funding human rights abuses in Bahrain, to funding extremists in Syria, it’s clear that this core objective is often not being met.

Just today, aid made headlines as it was revealed that 20% of projects in China are “explicitly promoting the capabilities of UK entities alone”. Rather than actually reaching and benefiting those most in need of aid, UK companies have funnelled money into, among other things, developing the Chinese film industry, improving the Chinese museum infrastructure and improving the credit bond rating system in China. While this isn’t to say that arts and culture aren’t important, aid money is legally bound to reducing poverty overseas and helping the world’s most vulnerable people. It’s hard to understand how spending in such a manner helps fulfil this aim.

Global Justice Now has a long history of holding the government to account on how aid money is spent. And we will continue to do so until we ensure that it is reaching those that really need it and it makes a long term difference to building a more just, equal and sustainable world.”

The fund itself has an annual value of £1 billion. When taxpayers learn of the malfeasance of government who abuse their position for their own power-play gaming on the world stage, they create an environment where the loss of trust manifests itself as anti-aid sentiment.

This £1bn is enough to pay the salaries of 35,000 fully trained nurses or teachers with 10 years experience or 42,000 police officers every year. Given the scale of austerity cutbacks in health, education and policing, many citizens would probably rather see taxpayers money repatriated to alleviate the pressures on those institutions who support the most vulnerable in society. This is especially so given recent shocking numbers of rising poverty in the UK, threats of tax rises to support the NHS and a general crisis lurking in just about every corner of society in Britain today. Think Housing crisis, health crisis, social care crisis and so on.

One only has to read Britain’s relentless war on the poor and vulnerable to see where £1billion could make a dramatic difference on home territory.