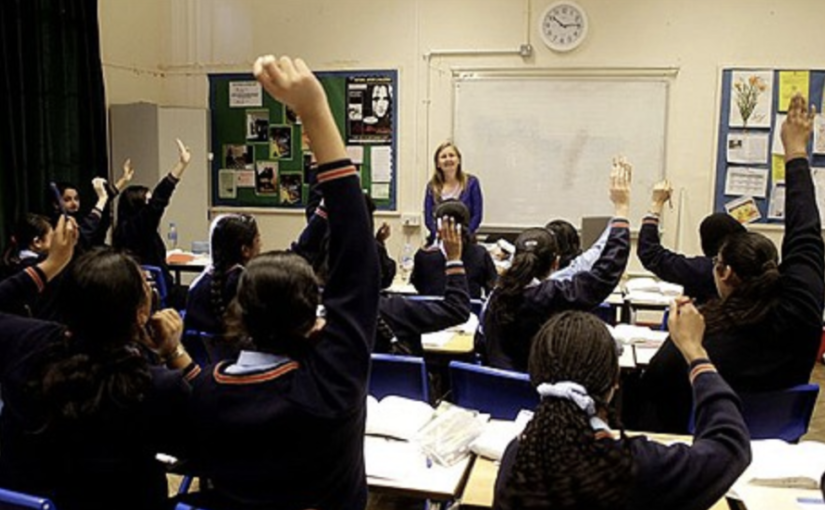 In England today almost 9,000 schools with more than 4 million pupils operate outside of their democratically-accountable local authorities. These schools are state-funded but independent of local control. The charitable trusts that run them are accountable only to the Secretary of State for Education, not to local people. They are, at least for now, “not for profit”. In this report, we’re focussing on just a few wealthy businessmen and Conservative party donors, who, through private contracts agreed with central government as part of the “academies” scheme are privatisatising England’s schools.

It is difficult to absorb this fact. One fabulously rich 77-year-old man controls schools attended by some 36,000 children in England. When he dies, his powers over the schools that bear his name will pass to his wife or sons. He doesn’t actually own those schools. However, he and his family have control of their entire governance structures.

That elderly man is Philip Harris. Given a peerage by Margaret Thatcher as Baron Harris of Peckham, he’d made his money in carpets. He has funded the Conservatives over decades-more than £900,000 in the past 15 years alone, a small dent in his fortune which has been estimated at approaching £300m.

Harris backs Brexit, the hard-right project to take Britain out of the European Union. Two years ago he told BBC Radio 4’s Today Programme: “It will give younger people more opportunity in this country and we won’t be controlled. . . We’ll have more freedom of laws. . . if you take a retailer, we can only keep our staff on for 35 hours a week, I think it is now.”

Harris and his wife own world-class show jumping horses with their friends the Kirkhams. Lord (Graham) Kirkham, who made his billion in sofas, is another big Conservative donor given a peerage by the Conservatives.

In the battle for the Conservative party leadership this past summer, Harris handed out £20,000 to Dominic Raab and another £10,000 to Michael Gove. Then, in the campaign’s closing weeks, he gave £30,000 to the man he’d once called too lazy and unpredictable to make a good Prime Minister: Boris Johnson.

His ally and beneficiary Michael Gove MP, a former Murdoch journalist, once asserted that Harris is a hero who has done more than the Labour party has for working-class children’s education.

But something else is going on. This “philanthropy” comes with strings attached. And, like Brexit, it’s one strand of a bigger, hard-right project.

Margaret Thatcher’s Conservative government introduced the concept of business “sponsors” taking over the governance of schools through the City Technology Colleges policy which produced 15 such colleges from 1988-1993. (Lord Harris was in at the beginning.)

The first sponsors were obliged to invest money in the schools as a condition of gaining such influence. Labour scrapped the requirement, requiring them to invest only their time and expertise.

Then came a radical expansion.

In four years as Conservative education secretary Michael Gove, relying heavily on his friend and long-time special adviser Dominic Cummings, rapidly expanded the academies project. A Department for Education press release promised “freedom” and “empowerment”, language Gove and Cummings would later recycle to push Brexit. “Academies put power back into the hands of headteachers”, they claimed.

Who is driving education “reform”?

Gove made some startling non-executive appointments to the Department for Education board five years ago, as reported in Gove’s own Operation Trojan Horse: the privatisation of our schools . The men, whose mission was to “drive reform of our education system”, included:

When Gove, Cummings and their private equity collaborators took control at the Department for Education in May 2010 there were 203 academies. By September 2012 there were 2,309 – a tenfold increase.

The parliamentary Public Accounts Committee published its highly critical report on the academy expansion programme in April 2013. Conservative MP Richard Bacon described the lack of accountability as “mind-blowing”. He said academy chains “could hide something by taking a little bit from several pots” and “parents would never know.”

This huge transfer of power from public to private hands has happened under-the-radar.

Among parents and teachers resistance grew.

A Guardian investigation revealed in 2014 that academy chains had paid millions of pounds into the private businesses of directors, trustees and their relatives.

According to the Guardian, Cummings blogged: “We got away with subverting every W/hall & No10 process, & it took DC 4 yrs to surrender.” Cummings would later re-emerge, more visibly, as the brains behind Brexit, a director of Vote Leave, the official campaign pushing Brexit and now a senior advisor to new PM Boris Johnson whose focus is now on Britain’s neutral civil service.

Today almost 9,000 of these quasi-independent schools operate outside of their democratically-accountable local authorities. The schools’ combined assets in 2017-18 totalled nearly £60bn, a figure that rises as more schools convert. The largest academy chain, the United Learning Trust, had total income of £288m last year.

This huge transfer of power from public to private hands has happened under-the-radar.

A particular kind of excellence

In June of this year a man called Jon Moynihan made the biggest single cash donation to Boris Johnson’s leadership campaign: £100,000.

Moynihan had already handed more than £120,000 to Vote Leave. (Since 2002 he’d given another £135,000 to the Conservatives.) He has chaired the Vote Leave Finance Committee and Vote Leave’s Campaign Committee.

And he was the founding director in June 2016 of a company calling itself Parents and Teachers for Excellence – a particular kind of excellence that exists outside of local community control. Moynihan’s fellow founding director, Rachel de Souza, is a former teacher and chief executive of Inspiration, the academy trust founded by big Tory donor –and current academies minister – Theodore (Lord) Agnew.

Jon Moynihan is the venture capitalist who made his first fortune in the United States as a partner in First Manhattan Consulting, and his next in the UK over two decades leading PA Consulting, an employee-owned firm that earned half its revenue from the public sector. Moynihan told the Financial Times the ultimate outcome of selling advice to the public sector would be to make government so small there would be “hardly anything to consult upon”.

In a lecture for Balliol, his old Oxford college, in 2013 he dismissed the idea of austerity. “I hope you all know there is no austerity,” he said. “All this stuff about austerity is insane political jousting that I just don’t understand”.

Now aged 71, Moynihan is the joint principal at Ipex Capital, a venture capital spin-off from PA Consulting. A long-time supporter of the neoliberal Institute of Economic Affairs, he joined its board of trustees last year.

His wife is the milliner Patricia Underwood who has made hats for Gwyneth Paltrow and Queen Noor of Jordan. The couple reportedly divide their time between London and New York. Lately, according to luxury real estate agents Corcoran, their Manhattan mansion sold for $6.7m.

Jon Moynihan is only one of the white male British fifty, sixty and seventy-something multi-millionaires whose common cause is pushing Brexit, shrinking the state and taking state education out of public control.

There are others too. For instance:

David Ross chairs an academy trust, bearing his name, which runs a chain of 34 academies educating 13,000 pupils. He controls the schools’ governance via a separate charity that has the right to appoint trustees and also bears his name (“my foundation” he has called it).

Theodore Agnew, 58, is another Tory donor millionaire businessman (Agnew has donated £162,250 since 2007 to the Conservatives including a £3,250 donation to Gove’s leadership campaign in 2016) who was appointed to the House of Lords – as Baron Agnew of Oulton – in order to become the minister responsible for the academies system as a whole. Gove put Agnew on the board at the Department for Education in 2010, and put him on the Ministry of Justice board in 2015.

Agnew founded the 13-school, 6,600-pupil Inspiration Trust in 2012. His wife, Clare, was this year appointed High Sheriff of Norfolk. Lord Agnew stood down as an Inspiration trustee in August 2018, 11 months after becoming an academies minister. The chain is chaired by his business associate, David Tibble. Until 2018, there were only three controlling members of this trust, who had the right to appoint and dismiss its trustees: Lord Agnew, Lady Clare and Tibble.

Sir Rod Aldridge is 72 and the former executive chairman of Capita, one of the biggest beneficiaries of central and local government outsourcing. The London-based chain which bears his name has nine of them – educating 6,500 pupils – including a school at the foot of the Grenfell Tower in Kensington, West London. Aldridge has been one of three controlling members of the academy trust which bears his name. Another member is a separate charitable trust which Aldridge set up. Members have the right to appoint and dismiss trustees. In a recent article published on the website of the private bank Coutts, Aldridge described the Aldridge Education schools as “my academies”.

Lord John Nash, 69, is a Conservative businessman who for nearly five years oversaw the academies programme, as a government minister. He was appointed as a non-executive director at the Department for Education in 2010 by his friend, Michael Gove. Nash now owns a chain of seven schools with 3,800 pupils.

A one-way street for privatisation

Conservative government legislation introduced in 2016, meant ministers were obliged to start the process of converting their community schools into a privately-operated academies. And it is a little known fact that failing academies can not go back under public control, it is a one-way street for permanent privatisation of England’s education system.

And if that fact was not alarming enough – here is another. As at October 2019, there are 24,323 schools in England – including 391 nurseries, 16,769 primary schools, 3,448 secondary schools, 2,319 independent schools, 1,044 special schools and 352 pupil referral units (source). Over one-third of schools in England are now, effectively, in private hands. And the majority of that has happened in just the last five years.

In community after community parent protests and staff strikes have backed schools’ existing management in preference to “academisation”, but the Conservative government has forced its plans through regardless.

It can do so in part because so much of the business of academies is hidden from public view. In closed meetings officials and their advisers decide which trust takes control of which school. Communities are denied detailed reasons why one trust has been chosen over another, denied the right to challenge them.

Academy trusts are currently set up to be not-for-profit. Michael Gove said, shortly after becoming Education Secretary that he was not “ideologically opposed” to profit-making. Two years later, he told the Leveson Inquiry that for-profit provision could happen. It is not hard to envisage a scenario in which for-profit state schooling could be allowed. In which case, the privatisation of England’s schools in all its manifestations would have arrived.

This piece was originally edited by Rebecca Omonira-Oyekanmi, and is a collaboration between Warwick Mansell’s website Education Uncovered, the Shine A Light investigative project, and openDemocracy. This version has been further edited down to reduce word count.