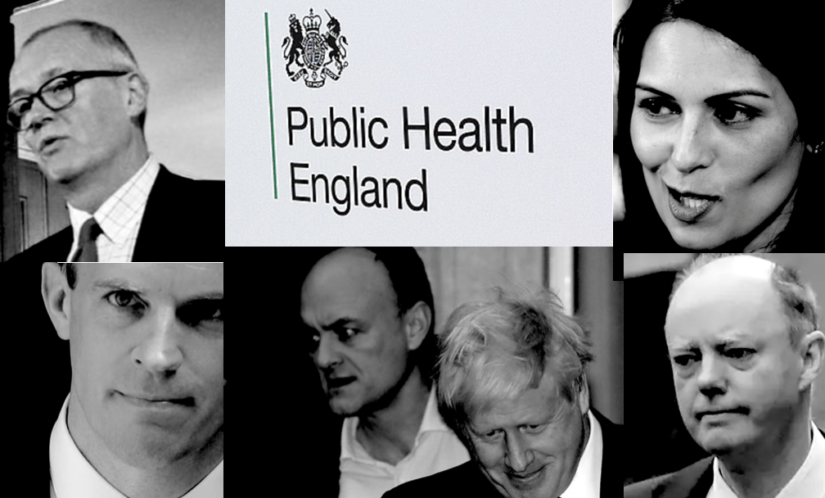 By TruePublica Editor: The weakness of the Boris Johnson government has been thrown into the light in the last few weeks and it is deflecting from the task at hand – to manage the ongoing COVID-19 crisis that, by the end of wave one of several waves, is likely to have killed some 50,000 people.

This has been caused by the government denying that the pandemic existed in the first place against all the evidence and warnings, which then blew up in their faces. Ever since, political fires have been burning around the feet of the cabinet due to their incompetence and in an attempt to put them out, certain high profile figures have been briefing against colleagues to save their own threadbare reputations.

The story surrounding the  Scientific Advisory Group for Emergencies (SAGE) – the UK governmental advisory body that advises central government in emergencies is a good example.

This story only became one in the first place because Downing Street now firmly believes the Prime Minister’s feet are feeling the heat of that same fire.  Even though Boris Johnson has been out of the fire since his rather ambiguous brush with death as the finger of COVID pointed directly at him, the flames won’t go out. The consequence is that blankets of protection are already being used to stop the PM being burned.

The PM is, right now, weighing up who to throw at the fire first. It’s an internal blame game and will likely follow those most expendable first and you can see how this has already played out.

Public Health England is first in line. Their strapline is – “we exist to protect and improve the nation’s health and wellbeing, and reduce health inequalities.” You can immediately see why this organisation will be hung out to dry. When things go wrong, as they have, the board will be able to stay until it is convenient and will then be replaced (because of their supposed incompetence) by those willing to facilitate an agenda of privatisation ready for Brexit – which is very much in the sights of this government. In the blame game – this is low-hanging fruit.

Next up will be Chris Whitty, the Chief Medical Adviser and Patrick Vallance, the Chief Scientific Advisor to the government to be thrown in to dampen the heat. The government continually keep stating they are following the science when that is patently untrue. They say this because these two high profile characters are an insurance policy because if the plan goes wrong – it’s the scientist’s fault. Don’t forget here – that before Brexit – experts were blamed and they will be happy to say so again.

Then we get to Matt Hancock. He will definitely go before Johnson’s senior advisor Dominic Cummings and both will go before hardline Johnson acolyte – Dominic Raab. We’ve also seen Michael Gove get close to the flames in an attempt to calm things down for the PM (and show his allegiance) – so it’s unlikely the ceremonial sacrificial burnings will go as far as Gove – but that depends a lot on just how bad the crisis gets.

A number of political commentators within certain circles have noticed that all of those named above, including Public Health England and the scientists, are briefing against supposed colleages in an attempt to make it look worse for others, simply to save their own skins.

At first, these briefings were seeing the story flying about from one end of the crisis to the other – but it wasn’t long before Public Health England (PHE) were being targeted as the mainstream media get a trail deliberately left for them by someone in the know.

PHE decided to fight back, stated unambiguously that they had done everything in accordance with the instructions given to them by government and with the resources they were afforded. The early stories of a lack of protective equipment was blamed on PHE. Their angry responses turned into action and then we saw Whitty and Vallance being dragged into the fray and questioned about the science. Then the story moved to the reasons why government ministers refused to join the EU procurement scheme. The briefings then moved away from PHE and the scientists and dragged the politicians into the fire.

As the politicians slowly get burned in a story raging around the mainstream media where even Piers Morgan becomes a greater opposition than the actual opposition – they brief against the next sacrificial lamb – and it couldn’t happen against anyone more deserving than Dominic Cummings. This is where the story will stay for a few days until the PM is back in Downing Street. As for Priti Patel – she’s in the Home Office which is responsible for immigration, security and law and order – not health, so using her to stand in for Johnson means little (what a shame) even though she is the very worst minister to put forward in a crisis.

The PM was, no doubt hoping that his period of convalescence would have coincided with the daily death toll falling enough to contain the story and save himself. Hardline Tories want Johnson to stay in power because their Brexit dream, their big payoff won’t happen without their icon.

And so what we have been witnessing is a ruling political party tearing itself to bits in the middle of a public health crisis because of its own incompetence. They could all see that the COVID-19 crisis was going to engulf them and so instead of working together and getting all the arrows to point in the same direction – they started throwing them at each other. It’s an appalling state of affairs that our government is more concerned about how to distance themselves from the deadly result of their own making rather than genuinely attempting to save lives. No-one will want to be tagged with the next crisis, so they won’t do anything about it to start with unless they know for sure it will turn out well.

It is telling that Murdoch has suddenly turned on the Tory party as well – right at the moment that Kier Starmer was elected leader of the Labour party. Last week’s Sunday Times story didn’t really have that much that was new in it, but they packaged it up like a real scandal and threw it like a petrol bomb straight into the flames. And they knew what they were doing when they did it.

Watch what the mainstream media are focusing on right now and then in the next week or so and ask yourself which of these stories is holding up the most because whoever is in there is likely going first.

Any chance that the PM is coming back to admit they could have handled this better to limit further criticism has now just about slipped away from being acceptable in the eyes of the public. At 50,000 deaths (including all care home and at home deaths) – the government have lost all the arguments and any defence strategies they might have had – and that is now only days away. After all, being aligned with Donald Trump’s appalling performance in terms of deaths per million in this crisis couldn’t get any worse and that is where the UK is surely going to end up!