Total lockdown of the UK is coming 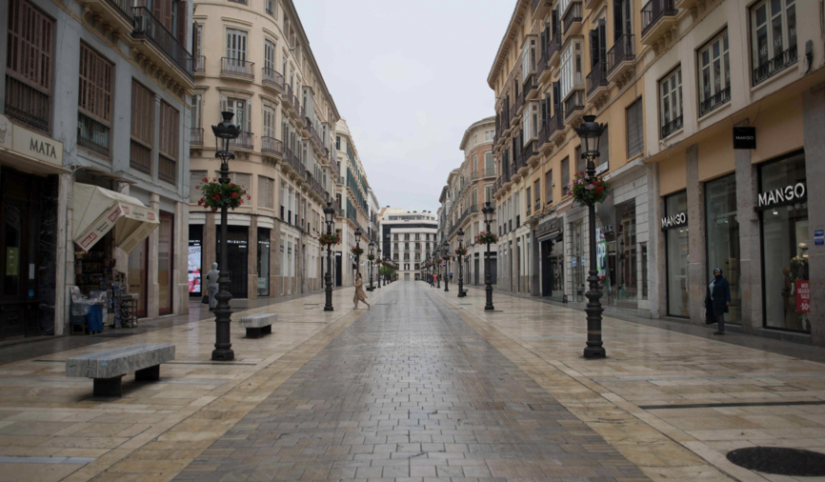 French President Emmanuel Macron told British Prime Minister Boris Johnson last Friday that he would close the border if the U.K. did not take more restrictive measures to contain the coronavirus.

“We had prepared the closure of our border and told Prime Minister Johnson we would implement it that day if there was no evolution [of British measures],” a senior French official familiar with the conversation said.

Then on Friday, the UK ordered pubs and restaurants to shut, and asked people to stay indoors. Schools were also closed.

“As the PM said on Friday these new measures were taken based on scientific advice and following the government’s action plan set out two weeks ago,” said a Downing Street official. Johnson’s office then rejected any suggestion he had announced the stricter rules because of another country’s threats.

The reality is that Britain did not listen to its Prime Minister. Boris Johnson built his career on lies, fabrications, misinformation and conjecture. Why would many take him seriously when serious things happen. And the management of the country in the midst of this crisis is not going well.

Sam Coates, deputy political editor at Sky News said that – “now the government tells people not to holiday in the UK during the crisis – after tourist hotspots beg people to go home because they can’t cope, AirBnB doing a roaring trade … until now? Why roll this out after 10pm at night. Why wasn’t this a message at the press conference (earlier)?”

Alex Wickham, the political editor at Buzzfeed News said yesterday that – “ahead of new Prime Ministers statement there was total fury across government tonight at people flouting social distancing orders – images of London parks packed with people over the weekend have shocked Whitehall — they believed people would behave more responsibly.”

Without attempting political point-scoring during a crisis, it must be clear to anyone, Left to Right, Labour or Tory, that Boris Johnson is making a mess of the whole management of whatever plan they have over the CoVid-19 crisis. His lack of understanding the situation as it develops is undermining his own messages. It is, as if, they have continued the ‘herd immunity’ plan and allowing Dominic Cummings to reign over the country in a moment when leadership is critical. The briefings from “sources” sucked up by a co-opted mainstream media are only making matters worse by planting the seed of doubt in everyone’s minds. And Dominic Cummings is quite openly all for his idea of eugenics when it is reported in the Times that:

“At a private engagement at the end of February, Cummings outlined the government’s strategy. Those present way it was “herd immunity”, protect the economy and if that means some pensioners die, too bad.” 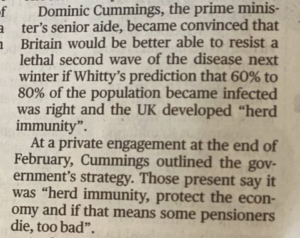 And to make matters worse, Dominic Raab has been named “designated survivor” by Downing Street if Boris Johnson or his top aides are taken ill during the coronavirus crisis. Raab has voted against increasing benefits for the disabled or for those who are very ill, consistently voted against helping the young into work, is for privatisation, is against a bankers bonus tax, or higher taxes on banks, voted for reductions to capital gains tax and corporation tax and even against measures to reduce tax avoidance. The point to be made here is that Raab is ideologically against helping those less able but prefers to help those who are far more able – the opposite of what is needed right now.

And if people are going to keep comparing this crisis to the Second World War, which they should not do, but having done so they should also remember that not long after it started, they got rid of the prime minister of the day because he was hopelessly out of his depth and very clearly not up to the job. Churchill subsequently led the war ministry.

In Italy, 17 doctors are now dead and over 3,500 medics are infected and off the frontline. In the UK, funeral directors are being told to create makeshift face masks out of “towels, bin liners and incontinence pads”, as they remove the bodies of coronavirus victims, because of a severe shortage of protective equipment in the UK.

Lockdown is now Johnson’s only remaining response, which goes against Dominic Cummings ideology of saving the economy before the people. As each day passes without the lockdown, more will die and the economy will only worsen.