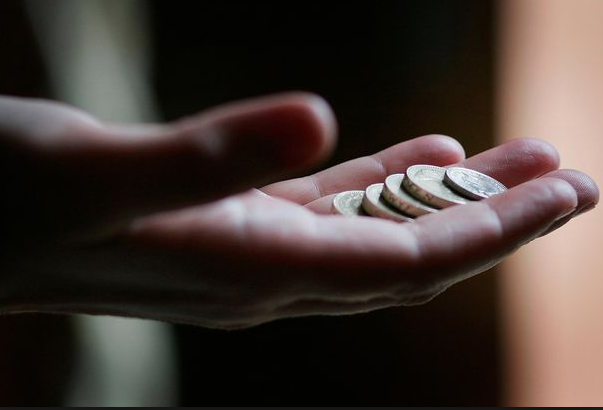 TruePublica Editor: This report originally appeared at TruePublica exactly two years ago. There are no published indicators we are aware of that would suggest things have got better for the general public in that time. Indeed, the continued roll-out of Universal Credit is known to be worsening the situation of those most in need of support.

Forty years after Margaret Thatcher came to power the true extent of neoliberal market reforms are still unravelling and inequality, as we are now hearing almost daily, has inexorably taken a grip and harming society much more widely as a direct result with evidence of rising poverty its consequence.

The Equality Trust and High Pay Centre has average pay for UK workers calculated as £26,500. However, average pay conceals the reality for millions.

The top 10% of UK workers earn £79,196. But the truth here is that this also includes the earnings of the top 1%, meaning the next 9% don’t really earn that figure.

What is grotesque is the next number that should shock everyone. The average pay of the next 90%, (by stripping out all earnings of the top 10%, including the 1% and 0.1% groups) leaves an annual income of just £12,969. Yes, you read that right. Stripping out the top 10% of average pay, leaves just £12,969 average pay for the remaining 90% of the population.

What is interesting about the figures collated by the Inequality Trust is that the data is about two years old (not their fault – it’s what is available), so things will actually be slightly worse as all analysts agree that inequality is getting worse, not better. (For updated statistical information from Inequality Trust click HERE)

That statistic itself is shocking enough on its own but many people in that 90% category earn considerably more than £12,969, leaving the bottom 20% earning around £5,500 per annum.

So how are British workers and families really doing?

In 2013, there were more working families living in poverty in the UK than non-working families for the first time since the birth of the welfare state. In fact, in that year (2013) alone there were 500,000 more families added to this over-stretched group.

According to an article in The Independent quoting the Joseph Rowntree Foundation, out of 26,400,000 UK households there were “6.7 million families with adults in employment who meet the worrying criteria of living in poverty compared with a combined 6.3 million of retired and unemployed families living in poverty.”

If true, these figures combined clearly shows that about 45 per cent of all households in Britain are in or on the verge of poverty and require some form of state aid to survive.

According to the Joseph Rowntree Foundation, the largest group in poverty are working age adults without dependent children and there are 4.7 million people in this situation alone, the highest on record – ever.

Ans according to the same charity and the New Policy Institute who worked together on a separate report, they found another 4.3 million families who were in work but need state support just to survive (data could only be collated from 2012).

Oxfam says 1 in 5 of the total UK population now lives below the official poverty line, meaning that they experience life as more than just a daily struggle.

It is bizarre that in the digital age another fact raises an eye-brow. A new report finds that up to 1.5 million benefit claimants may be facing destitution after disappearing from the welfare system.

Government is failing to track why all claimants have dropped off the roll meaning it has no idea how many people are being left penniless, according to Frank Field, the Work and Pensions Committee chairman. Field went further to say “Benefit sanctions are being applied on a scale unknown since the Second World War and the fate of those penalised is anyone’s guess.”

The government department responsible does not count them and HMRC doesn’t count anyone earning less than £8,500.

We know from various historical surveys and studies archived on such places as local histories.org that at the end of the 19th century about 25% of the population was living at or below subsistence level. Around 10% were living in total poverty and 15% were living just below the poverty line.

At the beginning of the 20th century, surveys showed 25% of the population still lived in poverty, with 15% struggling just below and 10% in abject poverty – so no change in 100 years.

Just after the First World War and before the Second World War, abject poverty (people unable to feed themselves) fell to 4% of the population and by 1950 this category had all but disappeared.

Yet, as Britain became wealthier, now the sixth richest nation on earth, Oxfam reports that we have over 2 million estimated to be malnourished and another 3 million at risk of becoming just that. Over one-third of the population are just one heating bill from hardship with 1 in 6 parents across the country going without food themselves in order to feed their own families.

Over one million people use Trussell Trust food banks today, with experts warning figures showing a 19% rise year-on-year is just the ‘tip of the iceberg’ of UK food poverty. In 2009, the same charity only distributed food to 41,000 people.

Official government statistics confirms that one-third of the entire UK population experienced poverty between 2010 and 2013 with overall poverty sitting at a staggering 16% – four times the level just after the First World War. The ONS tries to justify these figures by comparing the UK with the rest of Europe – including poor countries with a long history of poverty such as Moldova (lowest average income £2,300/$3,500), then Kosovo, Ukraine, Albania, Herzegovina and Bosnia, Serbia, Macedonia, Montenegro, Romania and Bulgaria – the highest average income of all these, Bulgaria at £9,450.

During the Blair years, overall poverty declined 20% with dramatic falls for children and pensioners (both groups falling 36%). Under the Coalition and now Conservatives, overall poverty has not got officially worse but that depends on the statistics.

There are 500,000 more children in ‘absolute poverty’ since David Cameron became PM. The total number of Britain’s youngsters living below the waterline is now over 4 million.

In 2015, 100,000 additional pensioners reached this poverty-stricken group alone and this is all before the latest huge axe to the national welfare fund is fully felt.

One of the Thatcher legacies of the 1980s and ’90s was intensified by her successor John Major in 1994, who was famed for his attack on the number of beggars on Britain’s streets as a result of their merciless actions against the poor and what turned out to be a failed housing policy. Major said he wanted to “remove their offensive and unjustified presence from the streets.” The headlines “Major Declares War On Beggars” was reported widely.

From all this, it appears that at least 20% of the UK population are living in abject poverty and another 20-25% very close to it.

You would have thought in one of the worlds wealthiest nations that eradicating absolute poverty would have been a defining challenge, a proud achievement to attain. Instead, the clock has been turned backwards. The government target of no child poverty by 2020 is no longer even an aspiration. In fact, the government even went as far as to scrap the 2020 child poverty targets for obvious embarrassing reasons.

A report by savethechildren in 2014 makes depressing reading as it estimated that by 2020 another one million children will have reached poverty (update – this number is on target as 500,000 were added by 2017). Each child has at least one parent accompanying them into poverty increasing the overall numbers significantly. The latest statistics show the projections are slightly behind reality already.