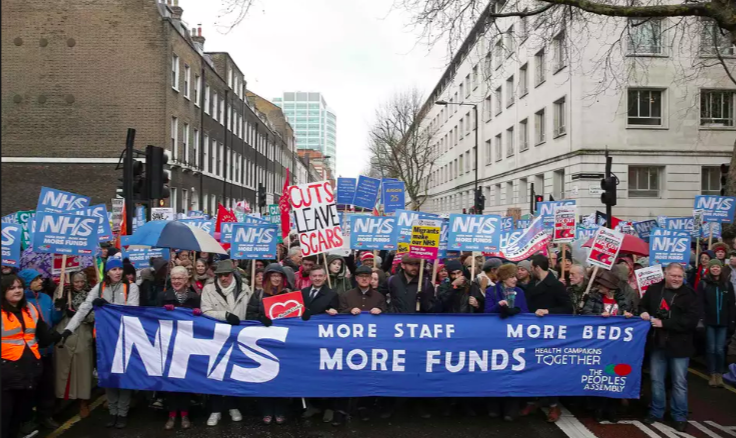 The deaths, despair and the suffering now endured by the chronically ill and disabled population was all planned a very long time ago, and is totally unrelated to the 2008 banking crisis, argues principal researcher MO STEWART.

“Oh what a tangled web we weave, when first we practice to deceive” is a very famous quote from the early C17th by Sir Walter Scott but is very apt for today’s politics, as the British government successfully deceive the British public and Parliament on route to the total demolition of the Welfare State, as originally planned thirty five years ago by the first female Conservative Prime Minister.

Unsurprisingly, the future demolition of the Welfare State was first suggested in 1982 by Margaret Thatcher, which archives advise led to the nearest thing to a Cabinet Office revolt in the history of Downing Street. However, all three major political parties supported the plan to rid the country of State-funded welfare, and every government since Thatcher covertly worked towards that goal when using toxic neoliberal politics.

The right-leaning New Labour government used the 2008 banking crisis to begin the welfare reforms, which really meant welfare destruction. Then, with the election of a Tory-led Coalition government in 2010, the demolition of the Welfare State began in earnest and the adoption of additional “austerity measures” guaranteed that many chronically ill and disabled people dependent upon State financial support would suffer, and many would die, when killed by the State.

Following in Thatcher’s footsteps, in 1992 John Major invited the help of an American insurance corporate giant to consult on future “welfare claims management” and the Second Vice-President of UnumProvident Insurance, John Lo Cascio, was the American consultant.

By 1994, the company were appointed as official government advisers and the 1994 Social Security (Incapacity for Work) Act introduced Incapacity Benefit, as designed to limit access to out-of-work disability benefit. By 1995 the Department for Social Security’s (DSS) then Principal Medical Adviser, Mansel Aylward, appointed following a lengthy career when involved with the private healthcare insurance industry, co-authored an academic paper with John LoCascio and so began the plan to justify the future demolition of the Welfare State.

“Problems in the assessment of psychosomatic conditions in social security and commercial schemes” argued that General Practitioners (GP) should not be expected to determine a patient’s incapacity, and the authority and clinical opinion of GPs would eventually be curtailed. The 1995 paper expressed concern as to the increases in “subjective impairments”, with conditions such as chronic pain and fatigue syndrome listed as the significance of diagnosis was rejected as having “a high degree of subjectivity”.

This one academic paper rejected the clinical opinion of GPs and disregarded diagnosis, prognosis and the claimant’s past medical history, which opened the door to the planned introduction of the fatally flawed biopsychosocial (BPS) model of disability assessment for State-funded long-term sickness and disability claims.

The introduction of the BPS model of assessment had been successfully adopted by UnumProvident Insurance in America, to limit payment for healthcare income protection insurance claims, and LoCascio was guiding the DSS as to how to introduce the BPS model into the UK.

The DSS was renamed the Department for Work and Pensions (DWP) in 2001 and were motivated to reduce and to eventually remove the Welfare State, whilst disregarding a parliamentary debate in 1999 which exposed UnumProvident Insurance as failing to pay out on legitimate claims for Income Protection Insurance.

Aylward was appointed as the DWP Chief Medical Officer in 2001 until his resignation, in 2005, to work as the Director of the new UnumProvident Centre for Psychosocial and Disability Research at Cardiff University, with £1.6million funding by the American corporate giant. Together with Gordon Waddell, DWP commissioned research led to the hastily produced publication in 2005 of “The Scientific and Conceptual Basis of Incapacity Benefits”, which would be used by the DWP from 2008 to justify the introduction of the Work Capability Assessment (WCA) to limit access to the new Employment and Support Allowance (ESA), as used to replace Incapacity Benefit. All 2.68 million Incapacity Benefit claimants were destined to be reassessed using the WCA, which is a replica of the bogus “functional assessment” used by UnumProvident Insurance to successfully resist funding healthcare insurance claims when using the BPS model of assessment that disregards diagnosis.

By 2005, following many successful legal cases throughout America, the California Department of Insurance Commissioner, John Garamendi, stated “UnumProvident is an outlaw company. It is a company that has operated in an illegal fashion for years…”

In the same year, an Unum internal report boasted that the UK government welfare policy is “to a large extent driven by our thinking”, which was demonstrated in the 2006 Welfare Reform bill, introduced by New Labour, using the same methodology adopted by UnumProvident Insurance, which introduced the use of the dangerous WCA to the unsuspecting chronically ill and disabled ESA benefit claimants in October 2008.

Eventually, distinguished academic excellence by Professor Tom Shakespeare and colleagues, not commissioned by the DWP or funded by an American corporate giant, would expose the Waddell and Aylward BPS model as having “no coherent theory or evidence behind this model” and demonstrated “a cavalier approach to scientific evidence”, whilst citing my research and exposing the BPS model as having no authentic authority or credibility.

Another significant DWP commissioned report, used to justify the welfare reforms and the use of the corporate sector to assess claimants, was “Reducing Dependency, Increasing Opportunity” as reported in March 2007 by former city banker David Freud. Commonly known as the “Freud Report”, this was another DWP commissioned report that claimed that one million Incapacity Benefit claimants could be removed from the 2.68million total, and was another official government report that was discredited by academic excellence. By May 2007 Professor Danny Dorling exposed the fact that Freud had “got his numbers wrong” and had misinterpreted his own references, so there never was going to be the predicted massive fall in claimant numbers. Coincidentally, Freud suddenly resigned his government position in December 2016 shortly after his past incompetence was publicly identified.

So, both the DWP commissioned reports used to justify the welfare reforms and the use of the BPS model for the WCA have been discredited by academic excellence and, when challenged in 2012, Aylward admitted that the BPS model was now considered by him to be “unsatisfactory” as it “no longer addresses the real needs of disabled people and the exclusion of disabled people from society”.

The government appointed BPS expert changed his mind in 2012 but the DWP continues to use the BPS model, with the WCA linked to the deaths of 92,000 ESA claimants 4 between December 2011 and February 2014, and the DWP have since refused to publish the updated ESA mortality totals as using Thatcher’s toxic neoliberal politics care, concern and compassion for chronically sick and disabled people are relegated to the history books, as greed replaces need.

All this and more is revealed in the book “Cash Not Care: the planned demolition of the UK welfare state”, as published by New Generation Publishing in September 2016, and available online and from all good book shops.

(Main image from a report by The Independent – “Both the American and British healthcare systems are fragmented and broken, sure. But at least the NHS is founded upon rock-hard principles of compassion and equality.”)

Mo Stewart is a former healthcare professional, a female disabled veteran and, since 2009, has researched the influence of corporate America with future UK welfare reforms. Mo is the lead independent researcher in the UK who exposed the long-standing plan to demolish the UK welfare state, to be eventually replaced with private healthcare insurance as successive UK governments were guided by Unum Insurance since 1992.