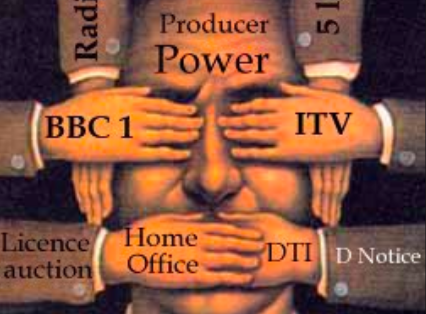 By Thomas Scripps: Craig Murray, the former UK ambassador to Uzbekistan, has published evidence suggesting that a D-notice has been issued to the press to protect MI6, hiding its connections to the Russian double-agent, Sergei Skripal. According to the Conservative government and a pliant media, Skripal and his daughter, Yulia, were poisoned by Russia with a “novichok” nerve agent.

A D-notice (Defence and Security Media Advisory Notice) is used by the British state to veto the publication of potentially damaging news stories. Formally a request to withhold publication, the slavishness of the mainstream media ensures these notices function for the most part as gag orders.

Murray initially reported the claims of famous whistleblower Clive Ponting that a D-notice had likely been issued in relation to some aspect of the Skripal affair. He then noted Channel 4 journalist Charles Thomson’s confirmation that a D-notice had, in fact, been issued and that it related specifically to censoring the identity of Skripal’s MI6 handler.

Murray suggests that the MI6 agent in question is called Pablo Miller.

Steele was responsible for compiling the Trump–Russia dossier, comprising 17 memos written in 2016 alleging misconduct and conspiracy between Donald Trump’s presidential campaign and the Putin administration. The dossier, paid for by the Democratic Party, claimed that Trump was compromised by evidence of his sexual proclivities in Russia’s possession. Steele was the subject of an earlier (unsuccessful) D-notice, which attempted to keep his identity as the author of the dossier a secret.

If Miller and, by extension, Skripal himself were somehow involved in Orbis’ work on the highly-suspect Steele–Trump dossier, alongside representatives of British and possibly US intelligence, then all manner of motivations can be suggested for an attack on the ex-Russian spy and British double agent by forces other than Russia’s intelligence service, the FSB.

Miller’s official career comprised a period of service in the British Army—the Royal Tank Regiment and the Royal Green Jackets—and then postings as a diplomat in the Foreign and Commonwealth Office in Nigeria from 1992, Tallinn in Estonia from 1997, and Warsaw in Poland from 2010 to 2013. In 2015, he was awarded an OBE by the Queen “for service to British foreign policy.”

In 2000, the FSB accused Miller of being “head of British intelligence in Tallinn” and claimed he had turned an FSB officer, Valery Ojamae, for MI6. Seven years later, Miller was again named as an intelligence operative, this time in connection with another MI6-recruited former Russian security officer, Vyacheslav Zharko. The FSB statement at the time indicated that Miller had also been suspected of involvement in the turning of Sergei Skripal.

His connections with Skripal do not end there. On March 7, before the government had got its narrative in order, the Telegraph newspaper reported that the Russian had been close to a “security consultant” living nearby: “The consultant, who The Telegraph is declining to identify [i.e. has been told not to], lived close to Col Skripal and is understood to have known him for some time.”

When this connection was first made in early March, the BBC’s security correspondent Gordon Corera and Guardian ’s Luke Harding rushed to issue denials. Corera tweeted:

Harding joined him, saying, “The @Telegraph story claiming a link between Sergei #Skripal and Christopher Steele’s company Orbis is wrong, I understand. Skripal had nothing to do with Trump dossier. Nor did unnamed ‘security consultant’ ever work for Orbis.”

At the time, replies to Harding pointed out that, though Miller’s LinkedIn page had been deleted, a search for “Pablo Miller” and “Orbis Business Intelligence” still brought the dead page up first on Google’s listings—with none of the other Pablo Millers on the site featured in the results. Another pointed to a forum on which the presence of Orbis Intelligence on Miller’s profile was mentioned, with a link to the same LinkedIn address.

Beside these points, there is the timing of Steele’s, Miller’s and Skripal’s intelligence activities in Russia. Miller, as we have seen, was closely involved with the turning and handling of Russian double-agents at least during his time in Tallinn from 1997 to 2010. Skripal was passing information to the British from 1995. Steele was posted to Moscow as a spy between 1990-1993, returned to London as part of a group of Kremlin specialists and was head of MI6’s Russia desk by 2006.

Professor Anthony Glees, the director of the Centre for Security and Intelligence Studies at the University of Buckingham, has commented, “It is beyond doubt that he [Skripal] would have known Steele and Steele would have known him.” Miller, meanwhile, would have been working under Steele.

As to why Corera and Harding omitted any research along these lines, in Corera’s case, one could point to the recent National Security Capability review which cited the BBC as an element of Britain’s programme for advancing its geostrategic position. Harding, on the other hand, seems to have a telepathic link with the minds of Britain’s leading security personnel. His most prominent work of late consists of hatchet jobs on Julian Assange and Edward Snowden and propaganda pieces against Russia.

While the precise nature of the relations between Skripal, Miller, and Steele are hidden, enough is already known to raise sharp questions about Skripal’s ongoing involvement with British intelligence.

Was he, as Murray suggests hypothetically, in fact, a participant in the creation of Steele’s Trump dossier? Did he have inconvenient knowledge of ongoing British operations in and against Russia? And, most significant of all, was he targeted by MI6 or the CIA in a preemptive strike to ensure his silence?

These revelations come amid the latest expression of the ongoing collapse of the official Skripal narrative. Yesterday, the UK’s National Security Advisor, Sir Mark Sedwell, admitted that the security agencies had no suspects in the Skripal case.

On April 20, the Daily Telegraph reported, “Police and intelligence agencies have identified key suspects in the attempted assassination of Sergei Skripal and his daughter Yulia… Counter-terrorism police are now trying to build a case against ‘persons of interest,’ who are believed to be back in Russia.”

The Telegraph had “been told” that “a search of flight manifests in and out of the UK has yielded specific names in the hunt for the Skripal’s would-be assassins.”

This story had a shelf-life of eleven days. None of these issues will be probed by the media because the war drive against Russia will suffer no criticism.