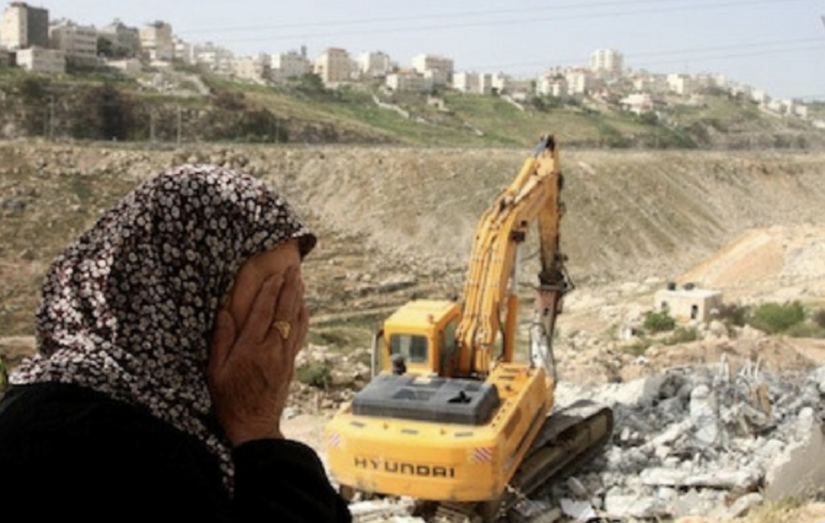 By Jonathan Cook – Nazareth, Israel: The judge who laid down the legal architecture needed to establish Israel’s settlements has just died. But his legacy has inspired a fresh generation of jurists to create new mechanisms for dispossessing the Palestinians. In the meantime, the United Nations’ independent expert on human rights in the Palestinian territories issued a damning verdict last week on what he termed “the longest belligerent occupation in the modern world”.

He warned of a recent surge in violence against Palestinians from settlers, assisted by the Israeli army, and a record number of demolitions this year of Palestinian homes in East Jerusalem – evidence of the ways Israel is further pressuring Palestinians to leave their lands.

He urged an international boycott of all settlement products as a necessary step to put pressure on Israel to change course. He also called on the UN itself to finally publish – as long promised – a database that it has been compiling since 2016 of Israeli and international companies doing business in the illegal settlements and normalising the occupation.

Israel and its supporters have stymied the release, fearing that such a database would bolster the Boycott, Divestment and Sanctions (BDS) campaign that seeks to end Israel’s impunity.

Shamgar was a reminder that the settlers have always been able to rely on the support of public figures from across Israel’s political spectrum. The settlements have been viewed as a weapon to foil the emergence of a Palestinian state.

Perhaps not surprisingly, most obituaries overlooked the chicanery of Shamgar in building the legal architecture needed to establish the settlements after Israel occupied the Palestinian territories in 1967.

But in a tweeted tribute, Benjamin Netanyahu, the interim prime minister, noted Shamgar’s contribution to “legislation policy in Judea and Samaria”, using the Israeli government’s term for the West Bank.

It was Shamgar who swept aside the prohibition in international law on Israel as an occupying state, transferring its population into the territories. He thereby created a system of apartheid: illegal Jewish settlers enjoyed privileges under Israeli law while the local Palestinian population had to endure oppressive military orders.

Then, by a legal sleight of hand, Shamgar obscured the ugly reality he had inaugurated. He offered all those residing in the West Bank – Jews and Palestinians alike – access to arbitration from Israel’s supreme court.

It was, of course, an occupier’s form of justice – and a policy that treated the occupied territories as ultimately part of Israel, erasing any border. Ever since, the court has been deeply implicated in every war crime associated with the settlement enterprise.

As Israeli lawyer Michael Sfard noted, Shamgar “legalised almost every draconian measure taken by the defence establishment to crush Palestinian political and military organisations”, including detention without trial, house demolitions, land thefts, curfews and much more. All were needed to preserve the settlements.”

Shamgar legalised almost every draconian measure taken by the defence establishment to crush Palestinian political and military organisations”, including detention without trial, house demolitions, land thefts, curfews and much more. All were needed to preserve the settlements.

Shamgar’s legal innovations – endorsing the systematic abuse of Palestinians and the entrenchment of the occupation – are now being expanded by a new generation of jurists.

Their latest proposal has been described as engineering a “revolution” in the occupation regime. It would let the settlers buy as private property the plots of occupied land their illegal homes currently stand on.

Disingenuously, Israeli officials argue that the policy would end “discrimination” against the settlers. An army legal adviser, Tzvi Mintz, noted recently: “A ban on making real-estate deals based on national origin raises a certain discomfort.”

Approving the privatisation of the settlements is a far more significant move than it might sound.

International law states that an occupier can take action in territories under occupation on only two possible grounds: out of military necessity or to benefit the local population. With the settlements obviously harming local Palestinians by depriving them of land and free movement, Israel disguised its first colonies as military installations.

It went on to seize huge swathes of the West Bank as “state lands” – meaning for Jews only – on the pretext of military needs. Civilians were transferred there with the claim that they bolstered Israel’s national security.

That is why no one has contemplated allowing the settlers to own the land they live on – until now. Instead, it is awarded by military authorities, who administer the land on behalf of the Israeli state.

That is bad enough. But now defence ministry officials want to upend the definition in international law of the settlements as a war crime. Israel’s thinking is that, once the settlers become the formal owners of the land they were given illegally, they can be treated as the “local population”.

But now defence ministry officials want to upend the definition in international law of the settlements as a war crime.

Israel will argue that the settlers are protected under international law just like the Palestinians. That would provide Israel with a legal pretext to annex the West Bank, saying it benefits the “local” settler population.

And by turning more than 600,000 illegal settlers into landowners, Israel can reinvent the occupation as an insoluble puzzle. Palestinians seeking redress from Israel for the settlements will instead have to fight an endless array of separate claims against individual settlers.

This proposal follows recent moves by Israel to legalise many dozens of so-called outposts, built by existing settlements to steal yet more Palestinian land. As well as violating international law, the outposts fall foul of Israeli law and undertakings made under the Oslo accords not to expand the settlements.

All of this is being done in the context of a highly sympathetic administration in Washington that, it is widely assumed, is preparing to approve annexation of the West Bank as part of a long-postponed peace plan.

The current delay has been caused by Mr Netanyahu’s failure narrowly in two general elections this year to win enough seats to form a settler-led government. Israel might now be heading to a third election.

Officials and the settlers are itching to press ahead with formal annexation of nearly two-thirds of the West Bank. Mr Netanyahu promised annexation in the run-up to both elections. Settler leaders, meanwhile, have praised the new army chief of staff, Aviv Kochavi, as sympathetic to their cause.

Expectations have soared among the settlers as a result. Their impatience has fuelled a spike in violence, including a spate of recent attacks on Israeli soldiers sent to protect them as the settlers confront and assault Palestinians beginning the annual olive harvest.

Mr Lynk, the UN’s expert, has warned that the international community needs to act swiftly to stop the occupied territories becoming a permanent Israeli settler state. Sadly, there are few signs that foreign governments are listening.