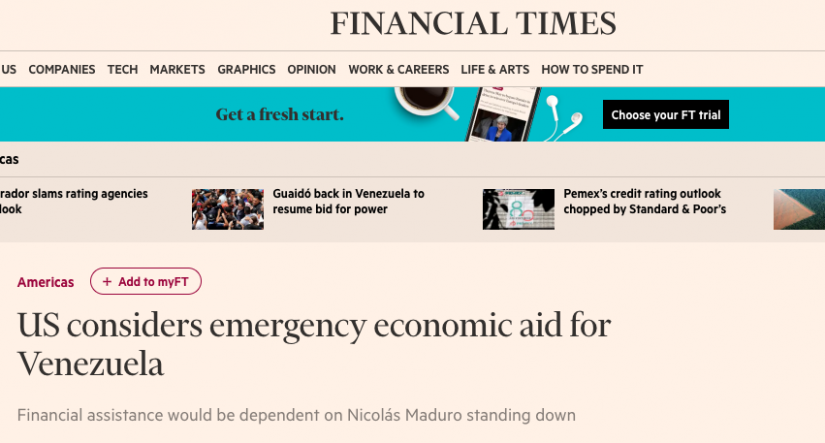 By TruePublica: Make no mistake – On the eve of yet another US war for oil, what usually preempts intervention into a sovereign state is the pretext of a humanitarian crisis as espoused by a co-opted mainstream media that rarely challenges the government diktat in foreign policy decisions.  One only has to look at Iraq or Libya for instance. In the case of Venezuela, do not be taken in by the mainstream media in Britain and America – they are merely parroting what they are being told to say. We’ve seen it all before.

From the New York Times that reports a back up plan is needed to prevent a Venezuelan famine to the Financial Times that appeals for desperate economic aid to reach the country. The mainstream media is even reporting that Venezuelan soldiers are starving to death but the truth is very different from what is little more than unadulterated propaganda peddled out on a mass scale.

Broadly speaking, the Western mainstream media are reporting about the humanitarian crisis in Venezuela and blaming the socialist leader Victor Maduro for his dictatorial mismanagement and therefore the crisis, the truth is quite different.

Testimony from the human rights investigator designated by the United Nations to assess the situation in Venezuela has been completely ignored.

Alfred De Zayas was the first UN investigator to go to Venezuela in 21 years – he has written a total of 13 reports for the UN Human Rights Council.

“I am the first and only UN rapporteur to have visited Venezuela in 21 years.  I have opened the door for other rapporteurs and even for the new UN High Commissioner for Human Rights, Michelle Bachelet, who was officially invited in December.  My visit lasted from 26 November to 5 December.  I met with members of the National Assembly, chamber of commerce, diplomatic corps, opposition groups, non-governmental organizations, church leaders, professors university students.
There was no “humanitarian crisis”, as confirmed to me – nothing to compare with Gaza, Yemen, Syria, Somalia, Central African Republic, etc.  But indeed there was a scarcity of foods and medicines.  The situation has gotten much worse since Dec. 2017 because of Trumps sanctions and the economic and financial blockade.”

This report on Venezuela by the United Nation’s own staff is important. De Zayas was himself completely bewildered as to how his reports have been totally ignored. In an attempt to get an audience De Zayas was interviewed by Abby Martin from the Empire Files in late February.

“And at no point when I was walking the streets of Venezuela that I felt threatened or saw violence and did not consider the country was experiencing a humanitarian crisis – but I do see human rights being used more and more to destroy human rights with the complicity of the mainstream media.”

“I think it would have been sensible to say that the BBC or Washington Post or FT … well – at no time since my report to the human rights council at the UN have I been approached by any of these organisations who actually have a responsibility to inform the wider public of what is really happening.

What is particularly Machiavellian is the cause of an economic crisis that threatens to become a humanitarian crisis – that’s what the US has done through the financial blockade and then goes on to say they are going to offer humanitarian help.

The so-called President-in-waiting Juan Guaidó is merely the jockey – he is riding in the trojan horse of the US – but the solution  is easier than the band-aid offered than simply food and medicine – the solution is in my report – that I told the Human Rights Council – is that the financial blockade has had extremely adverse human rights impacts.

A country as wealthy as Venezuela should have been able to borrow money on its enormous natural resoures to buy and sell like any one else. But because of the enormous US threats metered out, the banks have been closing the accounts of the Venezuelan government and of the state oil company.

Already some of the biggest banks, without notice, closed the bank accounts of the Bank of Venezuela.  They blocked the shipment of more than 300,000 doses of life-saving insulin and $1.65 bn of money spent by the Venezuelan government for the purchase of food and medicine, which was blocked.

The Venezuelan state oil company has not been able to move its money to buy all these things – it needs that money to buy food and medicine.

“The government (of Venezuela) is being asphyxiated and that was the name of the game. What the US government intended to do was to create a situation whereby the people or the military would topple the government and then the 1% could again come in and again control the wealth of Venezuela.”

“Venezuela has succeeded in bringing millions and millions of its people out of extreme poverty. Nobody cared in the 1980s and 90s that millions were starving to death – it was a government that was palatable to the US government – but the moment a left-wing government came to power the priority of Washington was to topple it.

The Bank of England – is yet another violation of international law (for withholding Venezuela’s gold sale) – but try to bring the US or UK to the International Criminal Court or the International Court of Justice, it is impossible. What is important now is for the UN to adopt a resolution condemning the sanctions and ask that they are lifted because they kill.

I would also like to see the prosecutor of the International Court investigate to what extent the number of deaths related to the sanctions imposed by the US – amount to a violation of article 7 of the Statute of Rome – it defines crimes against humanity.”

“When you deliberately impose sanctions and social blockades – effectively an economic war that asphyxiates a country economy and thereby make it very difficult for that country to provide food and medical supplies, the consequence is that thousands die – you have a case of crimes against humanity.”

De Zayas continues – “But the narrative in the mainstream press completely ignores it – when they refer to a humanitarian crisis they put the entire fault on the government and they say – well socialism is a proven failure, therefore, you have to have regime change.”

Abby Martin goes on to point out that the narrative by the mainstream media blocks another reality in this story. For instance, according to most of the mainstream media, most of the world’s leaders support America’s wishes and want Maduro out of power. However, not reported is that 51 countries in Africa recognise the Venezuelan elected leader in Maduro – only one recognises the unelected leader in waiting – that is Morroco.

Out of all the nations covering the whole of Asia, only Australia recognises Guido – 33 nations recognise Maduro.

In the Middle-East, it is only Israel supports that Guido – all other nations support Maduro. It is the same in the Americas and Caribbean – 17 countries support Guaidó – but 19 support Maduro. It goes without saying that some of those countries that back the USA in pressuring for regime change are either sycophants or the scared and have little choice in such matters.

The BBC reports that – “The UK, France, Germany, Spain and other European countries have officially recognised opposition leader Guaidó as interim president of Venezuela” – without actually saying that a number of European countries were solidly against regime change. Italy, Norway, Ireland, the Vatican and Switzerland were among them.

UK Prime Minister Theresa May’s official position was, as expected, that “further steps” were being considered, “including the use of sanctions.”

The use of force and the threat of the use of force is illegal and the US has threatnend time and time again that a military option is on the table with regard to Venezuela, this would be a major violation of international law.

It is true to say that 80 per cent of Venezuelan people had never heard of Guido.”

Abby Martin then goes on to discuss who is Juan Guaidó – with much of the report stating he spent most of his educational in the USA and has deep roots in causing violent street protests using right wing political activists. Guaidó was also involved in a US attempt of regime change back in 2002.

Martin makes the point that by 2010 the US government and other groups were pouring $50m a year into funding a Venezuelan opposition movement – with Guaidó being groomed for the operation.