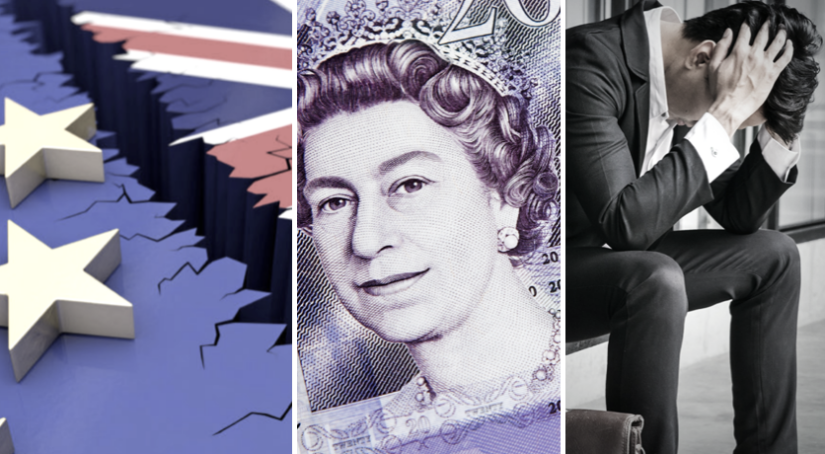 By TruePublica Editor: It’s easy to say anything in hindsight – but looking back now, would those that voted for Brexit still do so, or those who voted for Boris Johnson hand him the keys to Downing Street given his mismanagement of the Covid pandemic? We know that Brexit would be defeated today given the same question and we know that Boris Johnson is not fit to govern in a crisis. But for many, the real question now is – what should happen next?

Professor John Ryan, a senior Brexit adviser for private and public sector organisations laments that Boris Johnson’s government has been consistently incompetent in its implementation of Brexit. It will, he predicts, end in nothing more than economic decline where the divisive debate will rage on for years.

Professor David Blake at Cass Business School opines that Brexit is already a disaster and the yet to be negotiated financial services agreement could be catastrophic. “It is clearly not a sustainable long-term position for the UK to operate a £30bn+ business in the EU which can be stopped on a whim with 30 days’ notice.”

Peter Foster, the Public Policy Editor of the Financial Times, says that “The prevailing view in Brussels seems to be that given that dual regimes [for financial services and food etc] will emerge over time…it makes no sense to have the UK as an EU hub for very much. This penny is now starting to drop.”

The Institute for Fiscal Studies says – “We expect substantial restructuring of the UK economy in the years ahead as it responds to the new shape of demand from UK consumers in the wake of COVID-19 and the new shape of trading relationships in the wake of Brexit. Such restructuring implies a more protracted economic recovery and a substantial loss of economic capacity. Persistent policy (financial) support will be needed to help the economy through this transition. This is a significant challenge.”

Michael Cottakis at the LSE European Institute also takes the view that Brexit is not just a shot in the foot – but both feet – “If ‘Brexit ‘regret’ has been something of a ‘drip’, it will likely become a flood in the cold light of day. Many Conservative Leavers will not say it, but may think: was this all worth it?”

It’s a fair question. There have been many articles in the mainstream media publishing opinion pieces that ask the same question. The National Audit Office does not speculate on such matters. However, it expects that the early days of Brexit will cause a significant economic decline and over the next decade lost GDP will be the equivalent experience of the ten-year period of austerity that imploding banks bestowed upon us in 2008.

I could go on and on with these quotes.

To get Brexit done and end the torture, Boris Johnson was voted into the seat of power with a huge majority. Then a pandemic came to test humanity, to test our people, our resolve, our stiff upper lip reputation, to test the robustness of economic claims made by the free-marketeers and to test government. The failure that followed in Britain has been a desperately sad event to witness.

Our World in Data, from the University of Oxford, informs us of two startling facts. Britain now has the world’s second-highest death rates from Covid-19 and third-worst economic downturn (at the time of writing).  The fact is that this government has done a truly terrible job. The result is a lot of unnecessary death and suffering along with the crushing of carefully nurtured businesses and the expectation of mass unemployment. 100,000 Brits are now predicted to die, 250,000 small to medium-sized businesses (less than 50 employees) will fold by the 2021 year-end and another million thrown out of meaningful work.

And what is it that will be etched into the collective minds of those on the political left and centre-ground? Billions handed to Tory donors in contracts that failed the nation in its time of need, proving only that privatising public health initiatives has both profit and abject failure built-in. Scandalous stories surrounding profit-driven food parcels for starving children and a football player who single-handedly beat back a callous and cold-hearted, apathetic government. Political ideology has turned Downing Street almost overnight into a tyrannical cesspool of self-serving sycophants where lies, deceit and propaganda drives public opinion.

The government has chosen to use the pandemic as little more than a business opportunity. Parliamentary scrutiny of Downing Street decisions has been largely abandoned in favour of executive powers and ruling by decree. All manner of laws are being imposed without our consent. Soon, it will seem like Britain is emerging from the rubble of an economic war … that we lost.

So afraid of being exposed with constant failures to govern, the government is now acting like a dictatorship. Just two months ago Downing Street stood accused of running an ‘Orwellian Unit‘ to block Freedom of Information requests across all departments. In recent days it has emerged that it will now hand-pick questions from members of the public to be asked at COVID briefings.

In the years to come, the Union of Britain will in all likelihood dissolve. Scotland is predicted to leave within a decade. Northern Ireland and Ireland will unify within a generation. The fact that the government has rejected the idea of independence when it got it’s own from the EU will leave some extremists to resort to violence – a price we will all have to pay.

The ERG, an out-of-touch group of nationalists and imperialists like Jacob Rees-Mogg have damaged Britain’s prospects in the 21st century no end. They will blame the EU for all of the failures that Brexit brings and Covid for anything else.

The next election will ask one big question over this catastrophic failure – was it all worth it?

For years, I have thought that education, domestic policing and public health should be taken out of the hands of meddling political ideologues on both the left and right. Their ever-changing ‘reforms’ and constant top-down re-organisations have been a disaster. They have improved nothing. These important public services should be funded with a budget as a percentage of GDP, managed by impartial experts and professional contributors – with a long-term horizon to achieve world-class status. Political lobbying, a racket designed mostly to benefit those with the deepest pockets should be legally curtailed as should the skullduggery of dark money contributions to manipulate the electorate.

In a post-Covid, post-Brexit world – one other thing also needs a far more aggressive stance. That of tackling tax evasion. Individuals and corporations that use sophisticated accounting tricks and loopholes to effectively steal money from the taxpayer should be met with the same type of punishments that any other money launderer should do – prison. It is estimated by Tax Research UK that at least £90bn a year is lost to the treasury in this way – each year. Tax Justice UK says the same and Tax Watch UK disagrees with HMRC’s very optimistic £35bn losses to tax evasion – particularly as HMRC does not count tax losses to profit shifting from multinational enterprises.

The Covid pandemic is a disaster. The government could have handled it better but it was an unexpected event difficult to control. Brexit is a self-inflicted wound that will fester for years, probably decades and the central characters that brought it should not be allowed to do anything but own it. Cameron, Osborne, Cummings, Matthew Elliot, Boris Johnson, Farage, Corbyn, Daniel Hannon, and the Daily Mail’s Paul Dacre are central to this managed decline of Britain. Proper controls over social media, online safety and privacy are desperately needed.

Our collective behaviour as a nation in a pandemic has, to say the least, been wanting. Our once stoic reputation for standing up for each other in the face of danger has vapourised. Opportunists in the media, in business and in government have brazenly pocketed what they can undercover in one of our darkest moments.

There’s a moment when we have to ask ourselves – was voting for where we are right now worth it? And if you care to look, the answer is staring right back.

Britain needs an era of real reformation with its first task to bring democracy back from Boris Johnson’s cliff-edge. It needs to kick out the cronies in the House of Lords and replace it with an elected upper senate. It needs to strengthen the electoral system, justice, the rule of law and laws around press freedom, free speech, civil liberty and human rights. It needs to stamp out racism and discrimination and purge those in positions of influence that peddle these harms to civil society. It needs to do all these things to unite us all and show the rest of the world what we as a country stand for. There was a time when the underdog was supported, coaxed and nudged and the arrogant and pompous were derided, mocked and scorned.

Boris Johnson and his brand of politics – the politics of division, of culture wars, of spitefulness and vindictiveness have only been matched by opportunistic profiteering, deceit and malfeasance. It is the new norm – and the British people have allowed that to happen.

Only a complete political reboot will stop the rot and create the environment to push on and achieve an agenda fit for a modern world.