Caging Children, Separating Families: Has the War on Immigration Gone Too Far? 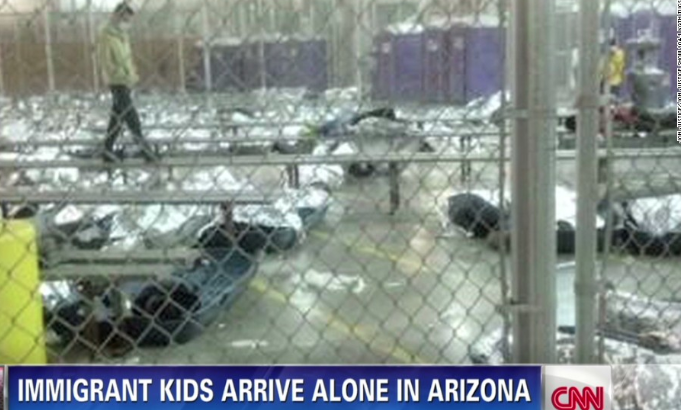 By John W Whitehead – US Constitutional Attorney – Charlottesville, Virginia: Sometimes you have to draw a line in the sand. This is one of those moments. There are some acts so wrong-headed, so immoral, and so inhumane that they simply cannot be defended on any grounds.

Be warned: the White House’s new “zero tolerance policy” for separating undocumented parents from their children at the border as a way of discouraging illegal immigration is pushing us into dangerous territory morally and otherwise.

In McAllen, Texas, undocumented migrant children are being held in cages made out of wire and net. These children are sleeping on concrete floors with thin foil “space blankets” for a mattress.

In Brownsville, Texas, reportedly more than 1,000 children who have been separated from their parents are being held in a former Walmart facility with blacked-out windows that has been transformed into a detention center and is being run by a government contractor.

Bear in mind, there is no bedtime story for these children.

There are no parents nearby to protect them from the things that go bump in the night.

There is no assurance that they will ever be reunited with their parents again.

We all know what happens to children who are left alone to fend for themselves: there are predators of every sort, many of them on the government’s payroll, looking to prey upon the young and vulnerable.

In too many cases, these children are being trafficked, lost by the system, and rendered beyond the reach of their families.

You who are reading this, hold tight to your own children. They won’t be yours for long if the government is allowed to prevail in its view that children of undocumented “criminals” automatically become wards of the state.

If you’re inclined to advance this double standard because you believe you have done nothing wrong and have nothing to hide, beware: there’s always a boomerang effect.

Whatever dangerous practices you allow the government to carry out now—whether it’s in the name of national security or protecting America’s borders or making America great again—rest assured, these same practices can and will be used against you when the government decides to set its sights on you.

Indeed, it’s just a short hop, skip and a jump from the government stripping undocumented “criminals” of their parental rights to the government meting out the same treatment to American citizens.

After all, in this era of overcriminalization in the American police state, we are all at risk.

To Jeff Sessions, the government’s policy is cut and dried: “If people don’t want to be separated from their children, they should not bring them with them,” he warned. “If you don’t want your child to be separated, then don’t bring him across the border illegally.”

For those with a moral conscience and a less self-righteous attitude, it’s harder to put such a dehumanizing policy into practice.

It’s particularly hard to swallow the government’s claim that it is doing all of this in the best interest of the migrant children. Remember, this is the same government that “lost” 1,475 migrant children within its care over a three-month period, in some cases handing them off to human traffickers.

The government’s track record doesn’t exactly inspire confidence in its ability to act in loco parentis for these children.

While illegal immigration is a problem that must be addressed, forcibly separating migrant children from their parents, transferring custody of them to the U.S. government, and caging them indefinitely in dog kennels cannot be the solution.

The law of reciprocity applies here.

I’m referring to the Golden Rule, which is found in nearly every world religion, including Judaism and Christianity. It means that we should treat others as we would have them treat us.

In other words, if you don’t want your children to be forcibly separated from you, caged and lost, then don’t allow these evils to be inflicted on anyone else, no matter how tempting the reason or how fervently you believe in the cause.

We are walking a dangerous path right now.

The slippery slope to the gas chambers starts when good people remain silent in the face of evil.

So when Sessions suggests that the government’s child separation policy is just the government doing its job to fight illegal immigration, don’t buy it.

This is not about illegal immigration. It’s about power and control. It’s about testing the waters to see how far the American people will allow the government to go in re-shaping the country in the image of a totalitarian police state. It’s about how much evil “we the people” will tolerate before we find our conscience and our voice.

The question we should be asking is not whether a particular government’s actions are legal but whether they are moral and just.

As Martin Luther King Jr. pointed out 55 years ago in his “Letter from a Birmingham Jail,” “everything Adolf Hitler did in Germany was ‘legal’ and everything the Hungarian freedom fighters did in Hungary was ‘illegal.’ It was ‘illegal’ to aid and comfort a Jew in Hitler’s Germany.”

In other words, there comes a time when law and order are in direct opposition to justice.

It’s time to draw that line in the sand.

What we are experiencing right now are the first stages of a desensitization campaign aimed at lulling us into a false sense of security.

As I make clear in my book Battlefield America: The War on the American People, there is worse to come.

The treatment being meted out to undocumented migrants and their children is only the beginning.

This is the start of the slippery slope.