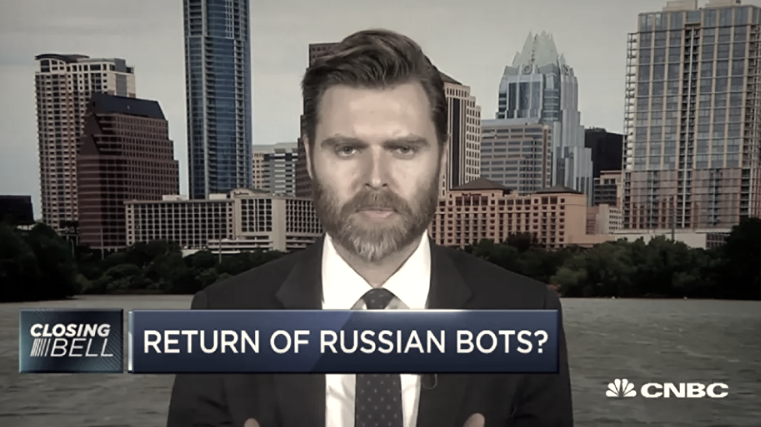 By Kit Knightly – OffGuardian: Most of us in the UK-based alternate media are familiar with the Integrity Initiative by now. A disinformation campaign funded by the foreign office through the (very dodgy sounding) Institute for Statecraft. Their job was to smear people opposing Theresa May’s government – be they foreign or domestic. The scale of the scandal hasn’t been appreciated by the public, thanks to the muteness of the mainstream media, but the foreign office using public money to have the intelligence agencies smear the opposition should be enough to bring down any government.

Thanks to some excellent work by people in the alternate media and some MPs, the Integrity Initiative’s website is currently empty “pending an investigation of data theft”. More honestly, it had become an embarrassment. They will likely disappear and then relaunch under a new name, and may indeed have already done so. For now, the Integrity Initiative is done.

Less well-known in this country is New Knowledge, a direct US-based parallel of the Integrity Initiative. They’ve been conducting “counter-propaganda” and “social media experiments” in the US since 2015, but only just hit the headlines.

WHO ARE “NEW KNOWLEDGE”?

A good question – we don’t really know. Their website claims to have “thousands of volunteers”. This may or may not be true – we only have three named people:

…but what a three they are. Jonathon Morgan, formerly of the State Department and Brookings Institute. Ryan Fox, formerly of military intelligence. Renee DiResta, formerly of Wall Street.

Obviously, some questions present themselves. Primarily, can we really trust all those “formerlies”? How did these three start this project? How do they know each other? Where does their funding come from?

We don’t know. What we do know is that, somehow, these three crazy kids got together and decided to use their money (we don’t know where they got it from) and their army of volunteers (we don’t know who they are) to “combat disinformation”. A noble goal indeed.

Let’s see how they did…

WHY IS NEW KNOWLEDGE IN THE NEWS?

This “think tank” recently made the headlines in the US because they were caught attempting to manipulate the Alabama Senatorial election. This is not a fringe “conspiracy theory” claim – it was in the New York Times, twice.

It’s now known that New Knowledge took part in various social media-based attempts to swing the Alabama senate race in favour of Democrat Doug Jones. These efforts were varied and odd. They included creating a fake Facebook page, purporting to be a group of Baptists who supported Republican candidate Roy Moore, because they believed he would help them ban alcohol statewide. They also encouraged (and/or created) independent candidates from the conservative right, in efforts to split the Republican vote.

We don’t know what impact it had – but Jones did win a very narrow victory over Moore (fewer than 22,000 votes).

However, this was – by far – the most important facet of this story:

It involved a scheme to link the Moore campaign to thousands of Russian accounts that suddenly began following the Republican candidate on Twitter, a development that drew national media attention.

New Knowledge pretended to be Russians supporting a Republican candidate in order to discredit him by association. They freely admit it:

They are staffed by State Dept. and intelligence agency veterans, and they spread false information to swing elections. That makes them a Psy-Op:

Psychological operations (PSYOP) are operations to convey selected information and indicators to audiences to influence their emotions, motives, and objective reasoning, and ultimately the behaviour of governments, organizations, groups, and individuals.

SO WHAT WAS THE REACTION?

Just like the Integrity Initiative coverage in the UK, the wider implications of corruption were completely ignored. The story was always framed in terms of “fighting back against the Kremlin”, or “turning Putin’s methods against him”. The coverage focused on this being a “gift for the Kremlin” because it appeared to undermine the claims of Russiagaters (Note “appears to undermine”, rather than “undermines”).

New Knowledge (NK), of course, denied they were attempting to corrupt democracy in Alabama. Morgan called the Alabama operation an “experiment” testing the effectiveness of “Russian methods”. He claimed it was specifically “designed to have as little impact as possible”. (How you can “test the effectiveness” of something designed to have no impact is unclear to me).

No evidence is supplied to corroborate Morgan’s version of events. In fact, there’s no reason to think this is a one-off at all. This is just the one we know about. Deep State psy-ops are like ants, for every one you see…there’s a hundred you don’t. A single sighting means there’s a whole colony nearby.

All of the national media and pundits resolutely ignored the very large elephant in the very small room – NK have existed since 2015. Before the 2016 Presidential election. The NYT warns these tactics could make the 2020 election ugly – but they don’t relate it back to the 2016 election at all.

This is not about Russia “corrupting our practices” or us “employing Russian methods”, this is evidence that there NEVER WAS any “Russian interference”, that “Russia’s methods” are actually our methods. Evidence that “Russiagate” is a Deep State psy-op designed to discredit and control Donald Trump’s administration.

Rather predictably, none of the media articles takes this angle.

And, unlike the Integrity Initiative, New Knowledge’s website is very much alive and well. Outside of political corruption, there’s also levels of financial corruption. New Knowledge CEO Jonathon Morgan is also one of the builders of Hamilton 68 – a program which claims to track Russian “bot” activity. On the one hand, he works for a think-tank which fakes bot activity, on the other, he charges people for a product he claims tracks bot activity. There is, of course, a massive opportunity for fraud and corruption there.

But, far from being rebuked, sanctioned, or punished in any way – New Knowledge seems to be functioning just as before.

They cite New Knowledge as an expert witness.

In summary, a shadowy think-tank staffed entirely by State Department and intelligence veterans is using funding from unknown sources and volunteers of unknown identity to pretend to be Russians on social media in order to discredit politicians and political movements in the United States. This should be a Congressional hearing. But instead, it’s a back-page “oh, did you know” story.

The following are important questions that need answering:

Just like the Integrity Initiative, New Knowledge works by concealing its true nature and intentions. It is layer after layer of deception and darkness. It can be beaten, the same way II was beaten – by bringing it out into the open and exposing lies to the light of truth.