Note from America: War Spending Is Bankrupting The USA 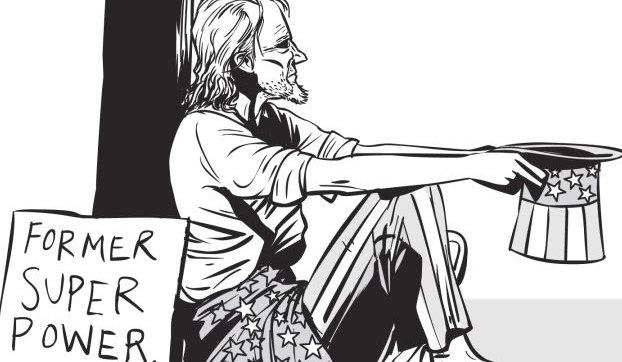 By John W Whitehead – Constitutional attorney – Virginia: Our nation is being preyed upon by a military industrial complex that is propped up by war profiteers, corrupt politicians and foreign governments.

America has so much to offer—creativity, ingenuity, vast natural resources, a rich heritage, a beautifully diverse populace, a freedom foundation unrivaled anywhere in the world, and opportunities galore—and yet our birthright is being sold out from under us so that power-hungry politicians, greedy military contractors, and bloodthirsty war hawks can make a hefty profit at our expense.

Don’t be fooled into thinking that your hard-earned tax dollars are being used for national security and urgent military needs.

You know what happens to tax dollars that are left over at the end of the government’s fiscal year? Government agencies—including the Department of Defense—go on a “use it or lose it” spending spree so they can justify asking for money in the next fiscal year.

We’re not talking chump change, either.

According to an investigative report by Open the Government, among the items purchased during the last month of the fiscal year when government agencies go all out to get rid of these “use it or lose it” funds: Wexford Leather club chair ($9,241), china tableware ($53,004), alcohol ($308,994), golf carts ($673,471), musical equipment including pianos, tubas, and trombones ($1.7 million), lobster tail and crab ($4.6 million), iPhones and iPads ($7.7 million), and workout and recreation equipment ($9.8 million).

So much for draining the swamp.

Where President Trump fits into that scenario, you decide.

Rest assured, however, that if Trump gets his way—to the tune of a $4.7 trillion budget that digs the nation deeper in debt to foreign creditors, adds $750 billion for the military budget, and doubles the debt growth that Trump once promised to erase—the war profiteers (and foreign banks who “own” our debt) will be raking in a fortune while America goes belly up.

This is basic math, and the numbers just don’t add up.

As it now stands, the U.S. government is operating in the negative on every front: it’s spending far more than what it makes (and takes from the American taxpayers) and it is borrowing heavily (from foreign governments and Social Security) to keep the government operating and keep funding its endless wars abroad.

Certainly, nothing about the way the government budgets its funds puts America’s needs first.

The nation’s educational system is pathetic (young people are learning nothing about their freedoms or their government). The infrastructure is antiquated and growing more outdated by the day. The health system is overpriced and inaccessible to those who need it most. The supposedly robust economy is belied by the daily reports of businesses shuttering storefronts and declaring bankruptcy. And our so-called representative government is a sham.

If this is a formula for making America great again, it’s not working.

We have become a debtor nation, and the government is sinking us deeper into debt with every passing day that it allows the military industrial complex to call the shots.

Simply put, the U.S. government is spending money it doesn’t have on a military empire it can’t afford.

Although the U.S. constitutes only 5% of the world’s population, America boasts almost 50% of the world’s total military expenditure, spending more on the military than the next 19 biggest spending nations combined.

In fact, the Pentagon spends more on war than all 50 states combined spend on health, education, welfare, and safety.

The American military-industrial complex has erected an empire unsurpassed in history in its breadth and scope, one dedicated to conducting perpetual warfare throughout the earth.

War is not cheap, but it becomes outrageously costly when you factor in government incompetence, fraud, and greedy contractors.

The U.S. government is not making the world any safer. It’s making the world more dangerous. It is estimated that the U.S. military drops a bomb somewhere in the world every 12 minutes. Since 9/11, the United States government has contributed to the deaths of around 500,000. Every one of those deaths was paid for with taxpayer funds.

The U.S. government is not making American citizens any safer. The repercussions of America’s military empire have been deadly, not only for those innocent men, women and children killed by drone strikes abroad but also those here in the United States.

The transformation of America into a battlefield is blowback.

All of this carnage is being carried out with the full support of the American people, or at least with the proxy that is our taxpayer dollars.

The government is destabilizing the economy, destroying the national infrastructure through neglect and a lack of resources, and turning taxpayer dollars into blood money with its endless wars, drone strikes and mounting death tolls.

It’s not sustainable, of course.

As long as “we the people” continue to allow the government to wage its costly, meaningless, endless wars abroad, the American homeland will continue to suffer: our roads will crumble, our bridges will fail, our schools will fall into disrepair, our drinking water will become undrinkable, our communities will destabilize, our economy will tank, crime will rise, and our freedoms will suffer.

So who will save us?

As I make clear in my book, Battlefield America: The War on the American People, we’d better start saving ourselves: one by one, neighbor to neighbor, through grassroots endeavors, by pushing back against the police state where it most counts—in our communities first and foremost, and by holding fast to what binds us together and not allowing politics and other manufactured nonrealities to tear us apart.

Literally and figuratively, the buck starts and stops with “we the people.”