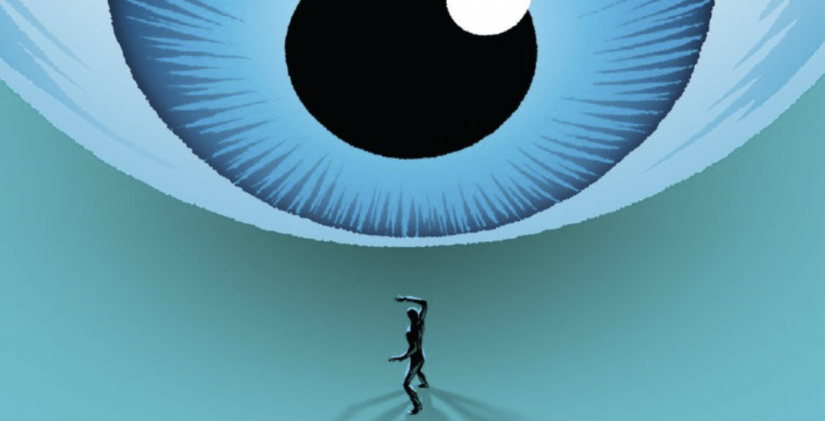 By John W. Whitehead & Nisha Whitehead: Data-bit by data-bit, we are building our own electronic surveillance concentration camps. With every new smart piece of smart technology we acquire, every new app we download, every new photo or post we share online, we are making it that much easier for the government and its corporate partners to identify, track and eventually round us up.

Saint or sinner, it doesn’t matter because we’re all being swept up into a massive digital data surveillance dragnet that does not distinguish between those who are innocent of wrongdoing, suspects, or criminals. This is what it means to live in a suspect society.

The government’s efforts to round up those who took part in the Capitol riots shows exactly how vulnerable we all are to the menace of a surveillance state that aspires to a God-like awareness of our lives.

Relying on selfies, social media posts, location data, geotagged photos, facial recognition, surveillance cameras and crowdsourcing, government agents are compiling a massive data trove on anyone and everyone who may have been anywhere in the vicinity of the Capitol on January 6, 2021.

The amount of digital information is staggering: 15,000 hours of surveillance and body-worn camera footage; 1,600 electronic devices; 270,000 digital media tips; at least 140,000 photos and videos; and about 100,000 location pings for thousands of smartphones.

And that’s just what we know.

Also included in this data roundup are individuals who may have had nothing to do with the riots but whose cell phone location data identified them as being in the wrong place at the wrong time.

Forget about being innocent until proven guilty.

“In a suspect society such as ours, the burden of proof has been flipped: now, you start off guilty and have to prove your innocence”

For instance, you didn’t even have to be involved in the Capitol riots to qualify for a visit from the FBI: investigators have reportedly been tracking – and questioning – anyone whose cell phones connected to wi-fi or pinged cell phone towers near the Capitol.

All of the many creepy, calculating, invasive investigative and surveillance tools the government has acquired over the years are on full display right now in the FBI’s ongoing efforts to bring the rioters to “justice.”

FBI agents are matching photos with drivers’ license pictures; tracking movements by way of license plate toll readers; and zooming in on physical identifying marks such as moles, scars and tattoos, as well as brands, logos and symbols on clothing and backpacks. They’re pouring over hours of security and body camera footage; scouring social media posts; triangulating data from cellphone towers and WiFi signals; layering facial recognition software on top of that – and then cross-referencing footage with public social media posts.

It’s not just the FBI on the hunt, however.

They’ve enlisted the help of volunteer posses of private citizens, such as Deep State Dogs, to collaborate on the grunt work. As Dinah Voyles Pulver reports, once Deep State Dogs locates a person and confirms their identity, they put a package together with the person’s name, address, phone number and several images and send it to the FBI.

According to USA Today, the FBI is relying on the American public and volunteer cybersleuths to help bolster its cases.

This takes See Something, Say Something snitching programs to a whole new level.

The lesson to be learned: Big Brother, Big Sister and all of their friends are watching you.

They see your every move: what you read, how much you spend, where you go, with whom you interact, when you wake up in the morning, what you’re watching on television and reading on the internet.

Every move you make is being monitored, mined for data, crunched, and tabulated in order to form a picture of who you are, what makes you tick, and how best to control you when and if it becomes necessary to bring you in line.

The government has the know-how.

It took days, if not hours for the FBI to begin the process of identifying, tracking and rounding up those suspected of being part of the Capitol riots.

Imagine how quickly government agents could target and round up any segment of society they wanted to based on the digital trails and digital footprints we leave behind.

As for the Fourth Amendment and its prohibitions on warrantless searches and invasions of privacy without probable cause, those safeguards have been rendered all but useless by legislative end-runs, judicial justifications, and corporate collisions.

“We now find ourselves in the unenviable position of being monitored, managed and controlled by our technology, which answers not to us but to our government and corporate rulers”

Consider that on any given day, the average American going about his daily business will be monitored, surveilled, spied on and tracked in more than 20 different ways, by both government and corporate eyes and ears. A byproduct of this new age in which we live, whether you’re walking through a store, driving your car, checking email, or talking to friends and family on the phone, you can be sure that some government agency, whether the NSA or some other entity, is listening in and tracking your behaviour.

This doesn’t even begin to touch on the corporate trackers that monitor your purchases, web browsing, social media posts and other activities taking place in the cybersphere.

All of this adds up to a society in which there’s little room for indiscretions, imperfections, or acts of independence.

Our digital trails are everywhere.

As investigative journalists Charlie Warzel and Stuart A. Thompson explain:

“This data—collected by smartphone apps and then fed into a dizzyingly complex digital advertising ecosystem … provided an intimate record of people whether they were visiting drug treatment centres, strip clubs, casinos, abortion clinics or places of worship.”

In such a surveillance ecosystem, we’re all suspects and data-bits to be tracked, catalogued and targeted.

As I point out in my book Battlefield America: The War on the American People, this is the creepy, calculating yet diabolical genius of the American surveillance police state: the very technology we hailed as revolutionary and liberating has become our prison, jailer, probation officer, Big Brother and Father Knows Best all rolled into one.

There is no grey area any longer.

Constitutional attorney and author John W. Whitehead is founder and president The Rutherford Institute. His books Battlefield America: The War on the American People and A Government of Wolves: The Emerging American Police State are available at www.amazon.com.