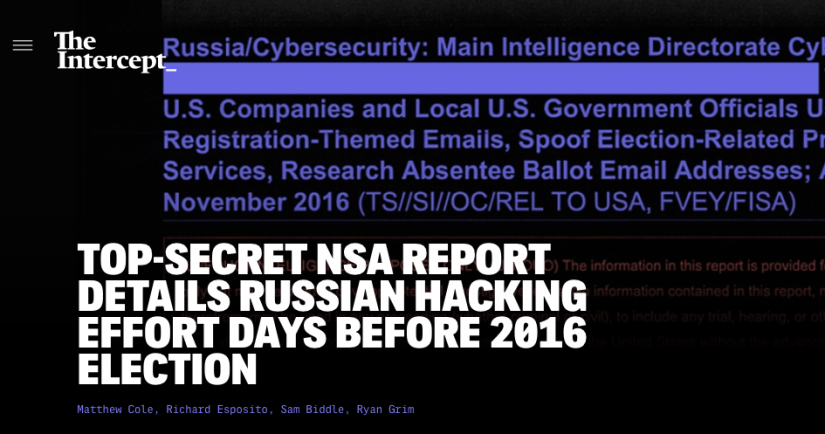 The Intercept headlined on June 5th, “TOP-SECRET NSA REPORT DETAILS RUSSIAN HACKING EFFORT DAYS BEFORE 2016 ELECTION” and devoted 3,811 words to saying that America’s National Security Agency alleges that “a months-long Russian intelligence cyber effort against elements of the U.S. election and voting infrastructure” is the subject of a top-secret “report, dated May 5, 2017,” which “is the most detailed U.S. government account of Russian interference in the election that has yet come to light. While the document provides a rare window into the NSA’s understanding of the mechanics of Russian hacking, it does not show the underlying ‘raw’ intelligence on which the analysis is based. A U.S. intelligence officer who declined to be identified cautioned against drawing too big a conclusion from the document because a single analysis is not necessarily definitive.”
“The report indicates that Russian hacking may have penetrated further into U.S. voting systems than was previously understood. It states unequivocally in its summary statement that it was Russian military intelligence, specifically the Russian General Staff Main Intelligence Directorate, or GRU, that conducted the cyber attacks described in the document.”
If the NSA’s conclusions are true, then Russian President Vladimir Putin is lying to say that the Russian government was not involved in any attempt to manipulate the 2016 U.S. Presidential election.
However, The Intercept also provides allegations from its news-sources saying that the only entity that the alleged Russian government effort succeeded in penetrating was “VR Systems, a Florida-based vendor of electronic voting services and equipment whose products are used in eight states. … According to its website, VR Systems has contracts in eight states: California, Florida, Illinois, Indiana, New York, North Carolina, Virginia, and West Virginia.”
Consequently, according to the NSA’s report, the only three states that were close enough in the vote-count for them to have switched the National election-result away from a Trump victory — which were Michigan, Pennsylvania, and Wisconsin — weren’t even possibly affected by this alleged penetration of VR Systems by the Russian government. (Trump won Michigan by 10,704 votes; Wisconsin by 22,748; Pennsylvania by 44,292. All three would need to have switched.)
The news-report by The Intercept fails to note this key fact, that even if the report is accurate, it’s irrelevant to the key question of whether there exists a possibility that Russian involvement in “hacking” the Presidential election might have affected the election’s outcome. Apparently, the four-reporter team at The Intercept weren’t interested in that question. All of their 3,811 words avoided mentioning it.
The NSA’s allegation that “states unequivocally in its summary statement that it was Russian military intelligence, specifically the Russian General Staff Main Intelligence Directorate, or GRU, that conducted the cyber attacks described in the document,” is the news, if there really is any that won’t subsequently be found to have been false. Even taking the document at face value, it isn’t alleging that any of the three states, all three of which would have had to be switched to Clinton’s win-column in order for her to have won the election, was involved in this “news.”
One might speculate that if this NSA report is accurate, then Russia’s GRU botched rather stupidly to be penetrating into the computers of a vendor that had no contract in any of the battleground states, but The Intercept didn’t even make note of that, either.
If you’ve wasted your time reading the present news-report, you’ve wasted reading only 597 words — less than 16% as many as are in The Intercept’s article.
Investigative historian Eric Zuesse is the author, most recently, of  They’re Not Even Close: The Democratic vs. Republican Economic Records, 1910-2010, and of  CHRIST’S VENTRILOQUISTS: The Event that Created Christianity.