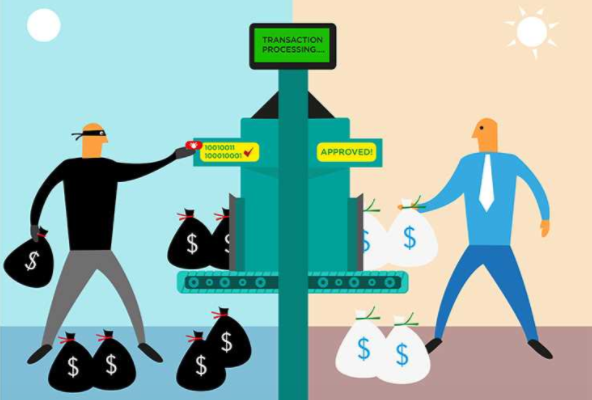 By Graham Vanbergen: Money laundering across the globe has now reached epidemic proportions. Its beating heart is the banking industry in the City of London supported by an army of accountants and lawyers who facilitate the crimes of weapons dealers, dictators, drug barons, dealers and traffickers and generally the worst kind of humanity. An article from Euractiv News shows the level of contempt the banking industry has reached when illegal accounts are named after cartoon characters and the police no longer bother to investigate reported money laundering crimes.

Euractiv News (Oct 2nd) – “Slovenia’s state prosecutor has opened a preliminary investigation into claims that the country’s biggest state-owned bank, Nova Ljubljanska Banka (NLB), may have laundered nearly €1bn from Iran between 2008 and 2010, breaking an international embargo and failing to enforce rules on the financing of terrorism. Slovenian media reported in July that 40-50 transactions took place every day from NLB bank to more than 30,000 accounts around the world, including some clearly held in fake names, such as Donald Duck and Mickey Mouse. ”

In one example, irrespective of international sanctions against Russia or the reasons for imposing them, the UK’s biggest banks were accused of processing money from a Russian scam, believed to involve up to $80bn (£65bn).

In this case, The Guardian reported that HSBC, the Royal Bank of Scotland, Barclays and Coutts had waved through over $700 million of transactions linked to a single deception scheme in Russia with links to the Russian government and the KGB and over a four year period that figure might be as high as $80 billion. The characters involved included oligarchs, Moscow bankers and figures working for or connected to the FSB, the successor spy agency to the KGB.

The trail led investigators to 96 countries and to a network of anonymously owned firms, most of them registered at Companies House in London. George Osborne attempted to sell Companies House as part of the huge privatisation drive whilst he was in office and David Cameron was himself caught up in the debate with family involvement in offshore tax havens, shell companies and Companies House, whilst he was Prime Minister.

Given America’s consistent accusations of Russia meddling in its democracy you would think it was right that every single banker involved in this huge crime was instantly arrested for breaches of international law and destabilising the financial system, let alone the more obvious crime of mass money laundering, but in truth, the scandal was reported and then swept under another politically motivated protection carpet.

In the case of the Russian scam, the process involved using a series of front companies in the UK (facilitated by the banks), which allow the actual owners behind them to remain secret. The companies then conducted fake business deals between themselves then sued each other in courts in Moldova, demanding the repayment of hundreds of millions of pounds of loans, which were actually agreed in advance. The money generated then goes on to buy assets in places like London.

Coutts, known as the Queens bank in Britain, was also involved in another massive money laundering scam at the same time for laundering $2.4 billion. It was fined $6.5million – a fraction of the profits of the laundering business. Again, no-one was arrested.

The City of London is now washing literally hundreds of billions each year and using its network of offshore havens to do so. The actual amount is of course publicly unknown. However, Britain’s capital city is now well known to be the world’s biggest money launderer and has the dubious accolade of having three out of five of the biggest money laundering events in the world attributed to it.

It is estimated that up to 5 percent of global GDP is laundered money. At $3.8 trillion, only three countries in the world, the U.S., China and Japan have a higher GDP. Money laundering is now worth double the entire oil industry and global defence spending and can now only be viewed as a global epidemic that transnational banks indiscriminately facilitate and profit from.

Britain even fought a war only for the ‘financial services’ industry to massively profit from the resulting misery it caused. In Afghanistan 454 British troops were killed and nearly 7,000 injured, almost all fighting the Taliban.

The CIA factbook, in the Illicit Drugs section, refers to the UK as ‘the money­ laundering  centre’. Afghan opium alone creates about 90 percent of global opium supply and according to the UN is worth up to $65 billion of revenue – the majority of which, requires laundering. The City of London also stands accused of being the world’s biggest money launderer of drugs production, trafficking, manufacture and distribution. In the meantime, the Taliban are thought to make $300 million a year from the sale of opium to fund their oppressive, murderous regime. Clearly, there is no crime that London banks will refuse dirty money from.

CIA World FactBook – Illicit drugs: “Afghanistan is the world’s largest producer of opium. Poppy cultivation increased 10 percent, to 201,000 hectares in 2016, while eradication declined significantly; the 2016 crop yielded an estimated 4,800 metric tonnes of raw opium, a 43% increase over 2015. The Taliban and other antigovernment groups participate in and profit from the opiate trade, which is a key source of revenue for the Taliban inside Afghanistan; widespread corruption and instability impede counter-drug efforts. Most of the heroin consumed in Europe and Eurasia is derived from Afghan opium; Afghanistan is also struggling to respond to a burgeoning domestic opiate addiction problem. A 2015 national drug use survey found that roughly 11% of the population tested positive for one or more illicit drugs as they are vulnerable to drug money, subsequently laundered through informal financial networks.”

The scale of money laundering through the City of London is hugely under-reported even by organisation’s such as Transparency International (TI). TI says, quite rightly, on its own website that “the interplay of corruption and inequality also feeds populism. When traditional politicians fail to tackle corruption, people grow cynical. Increasingly, people are turning to populist leaders who promise to break the cycle of corruption and privilege.” It then reports that the United Kingdom, the biggest money launderer on the planet is somehow the 10th cleanest country in the world when its comes to corruption!

Ernst & Young are TI’s biggest corporate donor. It is itself mired in corruption scandals all over the world. From huge fines dished out for improper relationships, to Japan’s worst accounting scandal in decades, huge fraud cases and even helping Lehman Brothers defraud investors in the run-up to the 2008 financial crash. TI obviously have no ethical conscience as to where their money comes from.

TI even had to close its American branch because its directors were actually corporate lawyers defending the likes of large transnational organisations like the banks in money laundering and corruption cases, in an irony worthy of satirical comedy.

As for the colossal money laundering business in the UK goes, although obliged by the Proceeds of Crime Act to report any suspicious transactions, in 10 years, not a single UK bank employee has been prosecuted for failing to do so that we have found in research.

Brexit is the next huge opportunity for the banking industry. As our article The City of London – Capital of an Invisible Empire goes on to say, London might develop further once Brexit kicks in. It will explore the possibility of deepening the City’s tax haven role through further tax cuts for the rich and more rolling back of financial market regulation and other social protections simply to protect itself. This raises the inevitable question about where the British banking industry might go post-Brexit.  Many of the services previously provided from London cannot be provided without the Single Market, which will require London-based banks and law firms to establish permanent establishment with the EU-27.

The British tax havens now see new market possibilities in China, India, the Middle East and Sub-Saharan Africa, but this will probably involve laundering ever larger amounts of dirty money and enabling ever more tax avoidance to stay as the world’s No1 cleaner of worldwide corruption and lawlessness.