The Western ‘Freelance Fighters’ Embedded With Anti-ISIS Forces in Syria 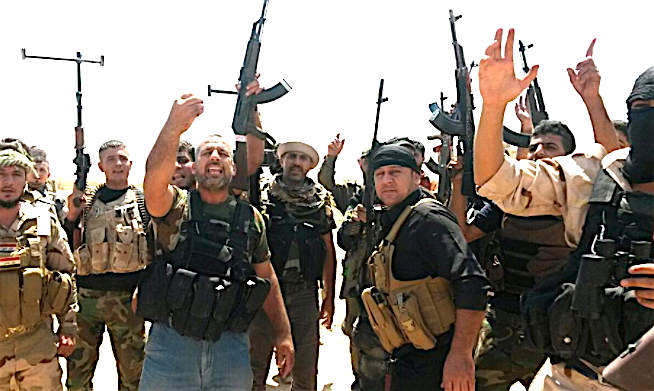 By Joseph Fitsanakis IntelNews: Dozens of Western European and American citizens are participating in the ongoing takeover of Raqqa, the de facto capital of the Islamic State in Syria, despite being prohibited from doing so by their own governments, according to recent news reports. Much has been written about foreign fighters who enter Iraq and Syria in order to join the ranks of the Islamic State, the Sunni militant group that previously went by the name Islamic State of Iraq and Syria (ISIS). But relatively little attention has been paid to the thousands of foreign fighters who have traveled to the region to join the war against ISIS.

In late 2015, independent researcher Nathan Patin published “The Other Foreign Fighters”, a rare examination of Americans who had joined the various armed groups fighting ISIS in the region. Patin found that at least 200 Americans had attempted to travel to the region in order to join the fight against ISIS as ‘freelance fighters’. Roughly half of those had managed to embed themselves with armed —primarily Kurdish— groups, and saw action on the ground. In 2016, three British and Irish anti-ISIS volunteers were jailed by Iraqi authorities while attempting to return to Europe after having fought for the Kurdish People’s Protection Unit (YPG), a group that serves as the armed wing of the Kurdistan Workers’ Party (PKK) in northern Syria. The three were initially suspected of being foreign ISIS volunteers, but were released from prison in April of 2016, after the YPG verified their bona fides.

A recent report by The Los Angeles Times claims that there are still “several dozen” Western volunteers embedded with anti-ISIS militias in Syria. They are doing so in the face of warnings by European and American government agencies that freelance participation in the Syrian civil war is a potentially punishable offense. The Times cited “local estimates” and spoke to Daman Frat, a YPG commander stationed in the eastern outskirts of Raqqa, who said that “several foreign volunteers” were embedded in YPG units. Most, though certainly not all of them, said Frat, had prior military experience. According to the paper, at least three Western volunteers, one British and two American citizens, have died in recent days, as YPG forces are closing in on the de factoISIS capital. The US Departments of State and Defense, which are tacitly in support of the YPG and other Kurdish groups operating in Syria, did not comment on The Los Angeles Times report.