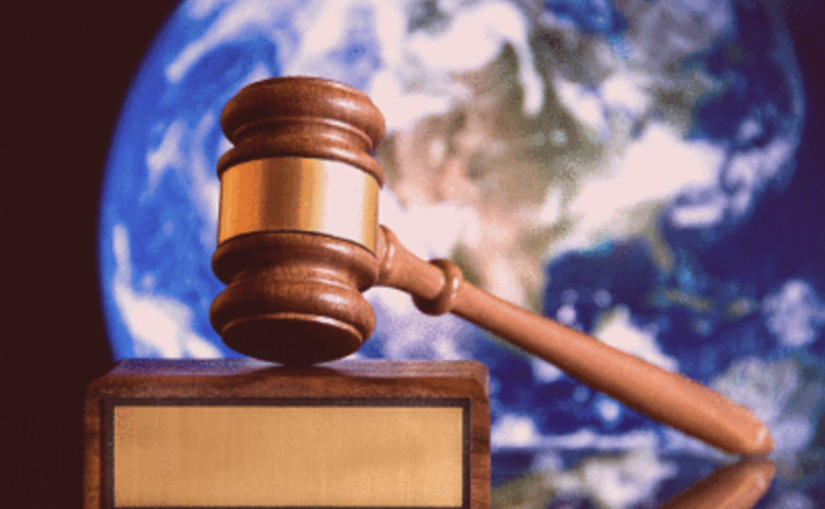 By Craig Murray: While it is true that rogue states – most notably the USA – have always posed a threat to the rule of international law, I see no serious room to dispute that the development of the corpus of international law, and of the institutions to implement it, was one of the great achievements of the twentieth century, and did a huge amount to reduce global conflict.

The International Court of Justice, the Law of the Sea Tribunal, the European Court of Justice, the World Trade Organisation, these are just some of the institutions which have played an extremely positive role, helping resolve hundreds of disputes during their existence and, still more importantly, helping establish rules that prevented thousands more disputes from arising. Regional Organisations, dozens of them including the EU, the African Union and the Shanghai Cooperation Organisation, have also flourished.

The judgement of the ICJ in the 160 cases it has heard has almost always been respected by the parties to the case. That has applied even when the dispute is radical, inflammatory and had already led to fighting and deaths, such as the settlement of the Nigeria/Cameroon border. The ICJ has been a massive success story.

The foundation of the International Criminal Court in 2002 was the high watermark in establishing the rule of law as the guiding principle of international affairs. As with all the major worldwide institutions of international law, the UK had played a leading role in the establishment of the ICC. I was in the FCO at the time, and I remember the quiet confidence that eventually the USA would join up, just as they had with the UN Convention on the Law of the Sea after decades of havering. In fact, the ICC has been a major disappointment, of which more later. I refer to 2002 as the high watermark for the rule of international law, because subsequently, the tide has turned decisively against it.

When Blair and Bush invaded Iraq, they not only precipitated a crisis that has resulted in millions of deaths, they dealt a killing blow to the entire fabric of international law

When Blair and Bush invaded Iraq, not only without the sanction of the UN Security Council but in the certain knowledge the Security Council was against it, and in Blair’s case against the unanimous opinion of the FCO’s entire cadre of Legal Advisers who stated that the war was illegal, they not only precipitated a crisis that has resulted in millions of deaths, they dealt a killing blow to the entire fabric of international law.

The results are now becoming every day more visible. We have just survived, for now, thanks to Iran’s remarkable sense and restraint, a dangerous crisis in the Middle East following the illegal assassination of General Soleimani, who was travelling on a diplomatic mission at the time. The use on a massive scale of execution by drone – including the execution of UK and US nationals – by the British and American governments, often without the permission of the government in whose territory the execution takes place, is an appalling breach of international law for which there appears to be no effective remedy.

The FCO Legal Advisers refused to advise that the killing of Soleimani was legal in international law. However, the UK government no longer cares if something is legal in international law or not. The government line was originally that there was an “arguable case” that the assassination was legal, then after objections from legal advisers the line changed to “it is not for the UK to determine whether the drone strike is legal”.

A direct consequence of this is sharply diminished UK influence in the world, and in particular, for the first time in 71 years it does not have a seat on the International Court of Justice.

The United Kingdom used to be a pillar, arguably the most important pillar, of international law. Thanks to a series of neo-con politicians, including Blair, Straw, Cameron, May and Johnson, the UK scarcely makes a pretence any more abut giving a fig about international law. It simply ignores the instruction of the United Nations and the International Court of Justice to decolonise the Chagos Islands. It refuses to implement the binding international arbitration on debt owed to Iran. It mocks the UN Working Group on Arbitrary Detention. It refuses to allow the UN Special Rapporteur on Violence Against Women into asylum detention centres. I could go on. A direct consequence of this is sharply diminished UK influence in the world, and in particular, for the first time in 71 years, it does not have a seat on the International Court of Justice. As the UK has effectively spurned the authority of the ICJ, this is scarcely surprising.

It was the UK’s reputation as an upholder of international law that moderated outrage at the UN at the UK’s anachronistic permanent membership of the UN Security Council. That international respect no longer exists, and the British Government are deluded if they think that the UK’s privileged UN status will last forever, especially as it can no longer be represented as a proxy for EU foreign policy.

The UN itself is, of course, suffering a sustained threat to its authority. By refusing the Iranian foreign minister a visa to attend a Security Council meeting on Soleimani, the USA struck at the very purpose of the UN. If the institution is to be held the hostage of its geographical host, what is its purpose? Ultimately, to regain relevance the UN would have both democratically to reform and to relocate, perhaps to South Africa. I do not see that happening in the near future.

As for the International Criminal Court, that has been a severe disappointment which in many ways symbolises the collapse of international law. Its failure to prosecute Bush and Blair for the war on Iraq set its direction from the beginning. Waging aggressive war is in itself a war crime and was indelibly established as such by the Nuremberg Tribunal. That it was not specifically mentioned in the Rome Statute was a flimsy pretext from judges not willing to take on power. The same judges have bottled out of the investigation of US crimes in Afghanistan and appear to be in the same process over war crimes in Gaza, where astonishingly there has been no backing from states for the ICC against Netanyahu’s threat to institute sanctions against ICC staff if investigations continue. I used to defend the ICC robustly over accusations that it was simply a tool of neo-con policy. I now find it very hard to do so.

The UK is not the only country ignoring international law. Spain’s repudiation of the European Court of Justice decision that Junqueras must be released to take his seat in the European Parliament is a huge blow to the prestige and authority of that organisation. Spain’s vicious persecution of Catalonia is itself the most comprehensive challenge that “western values” have faced for decades in the European heartland, by a large measure worse than anything which Orban has done. Spain completely ignores its Council of Europe obligations.

The structure of international law is looking very shaky indeed. It does matter, a very great deal. The world is becoming a significantly more dangerous place as a result.

Craig Murray is an author, broadcaster and human rights activist. He was a British Ambassador with the Foreign and Commonwealth Office and held various positions of seniority from London to West Africa