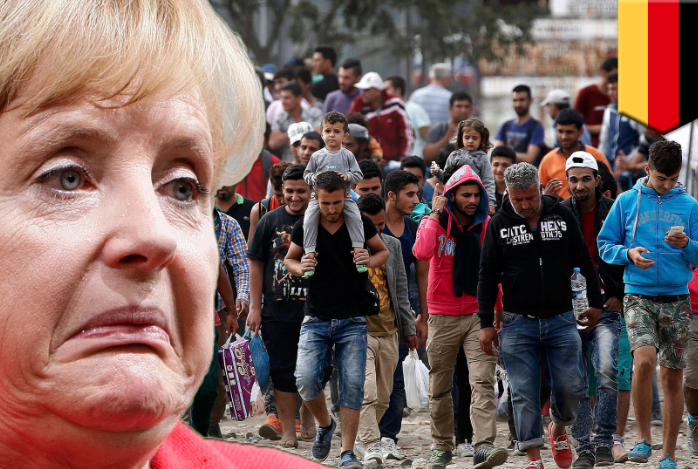 By Graham Vanbergen: Under the rule of Troika, Greece has been devastated. Ireland, Portugal, Spain, Italy and Cyprus have all felt the vice like grip of the ECB – all politically forced to their knees before Germany. After Brexit and the fall of the the establishment in France, Merkel ascends to the throne who had already coerced EU members to accept refugee quotas to ensure economic growth in the face of declining population demographics with dire consequences for the entire EU project.

Eastern European states have jointly crossed arms and refused to take part in the refugee quota programme, which is quickly turning into a stalemate position with EU bureaucrats. There are complicated reasons for the rejection in the region as a whole; some cultural, many practical or political but either way, self-determination on such matters should be sacrosanct. But sovereign power is not on the agenda for the unelected bureaucrats who determine the fate of member states, proving once again that authoritarian tendencies walk the corridors of power in Brussels.

The refugee crisis was the result of destroying the fragile structures and institutions that supported Afghanistan, carpet bombing Iraq and invading Syria with proxy armies. As if that was not bad enough, by destroying Libya, described as the cork in the African migrant bottle, all hell was let loose. The leaders of the UK, France and America refused to listen to reason as they exerted more so-called ‘influence’ over the region for reasons that are geopolitically complex but more or less designed to secure energy supplies on the one hand, whilst denying it to the emerging economic threats from the East in the form of China and Russia on the other. The EU ended up being the inevitable geographical destination as the cork popped.

European Parliament President Antonio Tajani claims there could be as many as 30 million migrants heading to Europe in the coming years and advocates “refugee cities” as some sort of answer to what is now predicted to be worst of the crisis yet to come.

The migrant crisis engulfing Europe is likely to last for 20 years, the government minister in charge of Britain’s international response warned two years ago. The Secretary of State for Britain’s Department for International Development, said the humanitarian crisis was such that many refugees would be unlikely to return home for two decades.

Since then, the refugee crisis has simply escalated and both of these predictions are numerically on target

Shape Up Or Ship Out

The crisis is now engulfing the political narrative across the 27 nation EU bloc:  European Commission President JEAN-CLAUDE Juncker, has come out and boldly stated: “Those who do not want to accept people with a different skin colour or a different belief come from a world of ideas that I do not consider compatible with the EU’s original mission.” Juncker further threatened “if the refugee crisis existed previously and Poland and Hungary refused to accept the refugees, they would have been denied membership.”

In short, the European Union is demanding member states toe-the-line or there will be consequences.

The latest data for refugee movements reveal that in the last four years 2.3 million refugees legally applied for asylum in the EU but a further 2.2 million were already known to be in the region illegally. Of the total 685,000 have been forced back to their home countries.

Calculated conservatively, Europe is officially absorbing a million refugees a year, so the 20 million prediction looks solid. At worst, the numbers could double as the crisis in the Middle-East continues to escalate and Libya escalates out of all control.  Syrians have so far made up the largest group of migrants attempting treacherous journeys across the Mediterranean Sea, followed by Afghans, Iraqis, Eritreans and sub-Saharan Africans. But many more are on the way.

Aydan Özoğuz, EU commissioner for immigration, refugees and integration, told the Financial Times that only a quarter to a third of the newcomers would enter the labour market over the next five years, and “for many others we will need up to 10”.

The Institute for Employment Research (IAB) found only 45 per cent of Syrian refugees in Germany have a school-leaving certificate.

Statistics from the Federal Labour Agency show the employment rate among refugees stands at just 17 per cent from over one million arrivals.

The FT wrote just last week “Initially, the influx of so many working-age, highly-motivated immigrants spurred optimism that they would mitigate Germany’s acute skills shortage and solve the demographic crisis posed by its dangerously low birth rate. Dieter Zetsche, chief executive of carmaker Daimler, said the refugees could lay the foundation for the “next German economic miracle.”

This is confirmation that Merkel’s refugee intentions, far from benevolent, was simply about boosting the workforce as Germany’s ageing factory workers, the oldest in Europe and rapidly catching Japan’s will see German factories with well over 2 million vacancies by 2025. But the plan has backfired.

In the space of just one year, migrants looking for work, but not finding it, jumped by 50 per cent. In the meantime, German Federal Employment Agency statistics show that only 6,500 refugees are enrolled in work training programmes out of nearly 500,000 unemployed. Around 12,000 applied but were not awarded a place due to poor academic or language skills.

Meanwhile, the EU is now spending ¢millions to stop hundreds of thousands leaving Libya, described as ‘hell on earth’ by migrants escaping torture, rape and killings where the rule of law is now completely absent.

The Independent reports that “Things are so bad in Libya the International Organisation of Migration has now warned people were being openly traded in “slave markets”. Rape is so prevalent among migrants in Libya and on journeys to it that some women passing through Ethiopia or Sudan are given a contraceptive injection, but many of those arriving on boats to Italy are already pregnant.”

Millions are trying to escape the carnage created by Britain, France and NATO. Izza Leghtas, Refugees International’s senior advocate for Europe, said EU countries know “full well” the dire conditions faced by migrants. “A lot more needs to be done to address this emergency, for refugees, Libya is death and torture – that is what they are fleeing.”