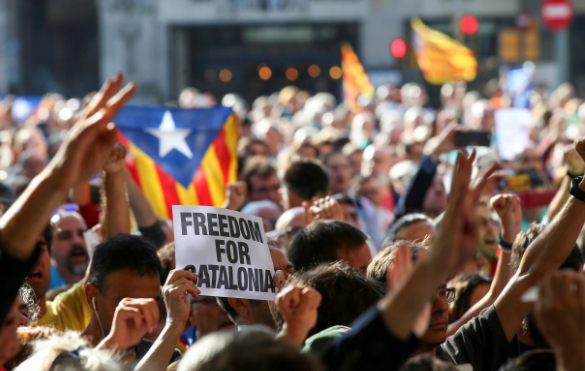 By Craig Murray: I have received an email appeal from the Candidaturas de Unidad Popular in Barcelona to say that their party HQ is under siege by the Guardia Civil and that its leaders are resisting arrest.

There is a peculiar reluctance in the British and other European mainstream media to state the truth about the very real Francoist origins of the Spanish government. The current government of Spain are the direct political heirs of Franco and that many of their ministers have personal and family connections to his rule.

Rajoy, Spain’s current Prime Minister, started his political career in 1981 by joining the People’s Alliance, a party founded in 1979 and led by 7 of Franco’s ministers to carry on the Francoist legacy. The People’s Alliance became the major component in the now governing People’s Party. It is a directly Francoist party.

The fascist instincts of the Madrid government when faced with the entirely legitimate desire for a democratic vote on Catalonian Independence are therefore part of the very political DNA of the ruling party. It is a truth which it is more convenient for the Establishment to avoid, particularly in Britain where it is feared Catalan Independence might encourage Scottish Independence.

The European Commission has shown commendable rectitude in warning both Poland and Hungary in strong terms of the consequences of their right wing lurches away fro democracy. It would be good to see the Commission and European governments warning Spain now, for actions which are a bigger threat to democracy than the Polish or Hungarian right have so far dared. But that would not suit the agenda of the neo-liberal ruling Establishment, so do not hold your breath.

Inside IndyRef2 – Scotland waking to a new dawn