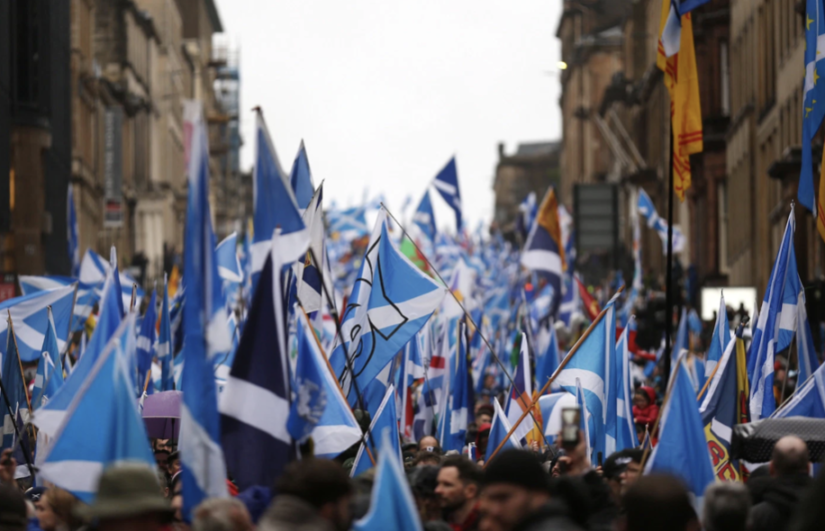 By Norrie Hunter: Here in Scotland, the weather was hellish and as we awaited Hurricane Brendan. However, something happened that brought the people out on a cold and wet day when usually a hot fireside is much more preferable: over 80,000 souls marched through the puddles in Glasgow demanding a second independence referendum.

After Boris Johnson’s recent electoral victory, in Scotland the Tories were reduced to a rump of just 6 MP’s, the Lib Dems reduced to 4 and the once-powerful Labour party to just a single MP. The outright winners were the SNP taking  48 seats or 80% of the vote. In ordinary democratic processes, this would have heralded a message to Boris Johnson that a second referendum was what Scotland was demanding. But no! The Tories then claimed that because the SNP only received 45% of the public vote then the ‘once in a generation’ claim they desperately hang on to must prevail.

To put the 45% figure in some kind of context, let’s look at the percentage vote for Boris Johnson which was 43.6%. Does this mean Boris Johnson does not have the mandate to govern? It is both preposterous and dangerous to prevent democracy – and of course, this has what has driven Scots on to the streets as a protest. Most are arguing for democracy but there is a growing anger that the SNP are not doing enough to secure a second referendum.

In Scottish elections, it must be remembered that 16/17 year old’s get an electoral vote as do EU citizens. In the UK election, they were restricted from voting. This would have brought the total share of the vote to well over 50%  It shows just how distinctly separate Scotland is becoming from England, not to mention the Welsh who have now woken up to the realisation that they are better making their own decisions. Theresa May the hapless former prime minister said on December 3rd 2018 – ‘Ultimately, membership of any union involves the pooling of sovereignty with the consent of the people‘. If those words had been spoken by Nicola Sturgeon the Tories would repeat the mantra ‘once in a generation’.

This phrase was used by Alex Salmond in a television interview in 2013 when asked how historic this vote would be if he said it was a once in a lifetime opportunity. To manufacture a coherent argument out of a phrase is perfectly ludicrous and cannot be sustained. Enter the Scottish legal system. An appearance by Boris Johnson in the Scottish courts is not something he may relish – instead, he might just ‘let Scotland go’ A poll last year among Tory supporters asked if securing a Brexit Deal meant ‘losing’ Scotland – 67% were content to see Scotland leave the UK.

The march in Glasgow was covered by a worldwide press but the British mainstream media were virtually silent over of this big event. Scottish Independence is not going away and anyone trying to bury their heads in the sand are in for a rude awakening. Even the other unionist parties are struggling to avoid the elephant in the room. For instance, Jess Phillips, a Labour leader contender has also stated that 55% of Scottish people did not vote for an independence party. She also tried to put a meaningful slant on things by stating  “I read somewhere that by the strength and endeavour we achieve more than we achieve alone”. The laughter was audible during the march but as we leave the EU – that statement is as hollow as a drum.

You could hardly put a cigarette paper between the unionist parties when it comes to Scotland. When will they ever learn that Scottish men, women and children march in the rain because that want change? We have oil rigs in our waters yet the highest level of child poverty, we have the best universities yet our graduates move overseas with their talent. Having a parliament so far away and unaware of Scottish issues we have a smaller devolved parliament that provides as much as it can for the people it can reach out too.

The start of the independence campaign has started in earnest and from the comfort of my warm house I see the cold winds of change hitting Westminster so hard it will crumble against the Scotland it tries to ignore.

Inside IndyRef2 – Looking forward to a new future