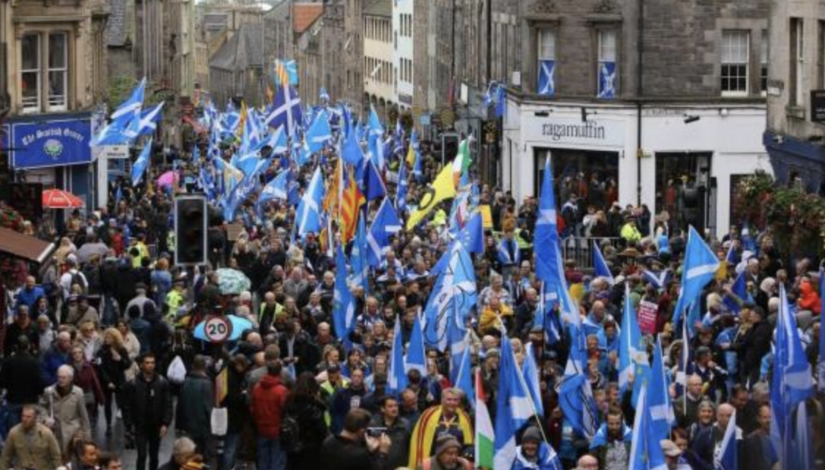 By Craig Murray: I have no doubt that the Johnson government will very quickly become the most unpopular in UK political history. The ultra-hard Brexit he is pushing will not be the panacea which the deluded anticipate. It will have a negative economic impact felt most keenly in the remaining industry of the Midlands and North East of England. Deregulation will worsen conditions for those fortunate enough to have employment, as will further benefits squeezes. Immigration will not in practice reduce; what will reduce are the rights and conditions for the immigrants.

Decaying, left-behind towns will moulder further. The fishing industry will very quickly be sold down the river in trade negotiations with the EU – access to fishing (and most of the UK fishing grounds are Scottish) is one of the few decent offers Boris has to make to the EU in seeking market access. His Brexit deal will take years and be overwhelmingly fashioned to benefit the City of London.

There is zero chance the Conservatives will employ a sizeable number of extra nurses: they just will not be prepared to put in the money. They will employ more policemen. In a couple of years time they will need them for widespread riots. They will not build any significant portion of the hospitals or other infrastructure they promised. They most certainly will do nothing effective about climate change. These were simply dishonest promises. The NHS will continue to crumble with more and more of its service provision contracted out, and more and more of its money going into private shareholders’ pockets (including many Tory MPs).

The disillusionment will be on the same scale as Johnson’s bombastic promises. The Establishment are not stupid and realise there will be an anti-Tory reaction. Their major effort will, therefore, be to change Labour back into a party supporting neoliberal economic policy and neoconservative foreign (or rather war) policy. They will want to be quite certain that, having seen off the Labour Party’s popular European style social democratic programme with Brexit anti-immigrant fervour, the electorate have no effective non-right wing choice at the next election, just like in the Blair years.

Northern Ireland is perhaps the most important story of this election, with a seismic shift in a net gain of two seats in Belfast from the Unionists, plus the replacement of a unionist independent by the Alliance Party. Irish reunification is now very much on the agenda. The largesse to the DUP will be cut off now Boris does not need them.

To that end, every Blairite horror has been resurrected already by the BBC to tell us that the Labour Party must now move right – McNicol, McTernan, Campbell, Hazarayika and many more, not to mention the platforms given to Caroline Flint, Ruth Smeeth and John Mann. The most important immediate fight for radicals in England is to maintain Labour as a mainstream European social democratic party and resist its reversion to a Clinton style right-wing ultra-capitalist party. Whether that is possible depends how many of the Momentum generation lose heart and quit.

Northern Ireland is perhaps the most important story of this election, with a seismic shift in a net gain of two seats in Belfast from the Unionists, plus the replacement of a unionist independent by the Alliance Party. Irish reunification is now very much on the agenda. The largesse to the DUP will be cut off now Boris does not need them.

For me personally, Scotland is the most important development of all. A stunning result for the SNP. The SNP result gave them a bigger voter share in Scotland than the Tories got in the UK. So if Johnson got a “stonking mandate for Brexit”, as he just claimed in his private school idiom, the SNP got a “stonking mandate” for Independence.

I hope the SNP learnt the lesson that by being much more upfront about Independence than in the disastrous “don’t mention Independence” election of 2017, the SNP got spectacularly better results.

The SNP needs to strike now, within weeks not months, to organise a new Independence referendum with or without Westminster agreement.

I refrained from criticising the SNP leadership during the campaign, even to the extent of not supporting my friend Stu Campbell when he was criticised for doing so (and I did advise him to wait until after election day). But I can say now that the election events, which are perfect for promoting Independence, are not necessarily welcome to the gradualists in the SNP. A “stonking mandate” for Independence and a brutal Johnson government treating Scotland with total disrespect leaves no room for hedge or haver. The SNP needs to strike now, within weeks not months, to organise a new Independence referendum with or without Westminster agreement.

If we truly believe Westminster has no right to block Scottish democracy, we need urgently to act to that effect and not just pretend to believe it. Now the election is over, I will state my genuine belief there is a political class in the SNP, Including a minority but significant portion of elected politicians, office holders and staff, who are very happy with their fat living from the devolution settlement and who view any striking out for Independence as a potential threat to their personal income.

You will hear from these people we should wait for EU trade negotiations, for a decision on section 30, for lengthy and complicated court cases or any other excuse to maintain the status quo, rather than move their well-paid arses for Independence. But the emergency of the empowered Johnson government and the new mandate from the Scottish electorate require immediate and resolute action. We need to organise an Independence referendum with or without Westminster permission, and if successful go straight for UDI. If the referendum is blocked, straight UDI it is, based on the four successive election victory mandates.

With this large Tory majority, there is nothing the SNP MPs can in practice achieve against Westminster. We should now withdraw our MPs from the Westminster Parliament and take all actions to paralyse the union. This is how the Irish achieved Independence. We will never get Independence by asking Boris Johnson nicely. Anyone who claims to believe otherwise is a fool or a charlatan.

Craig Murray is an author, broadcaster and human rights activist. He was a British Ambassador and held various positions of seniority from London to West Africa.

Scottish independence: An example of the ugliness of deep state power