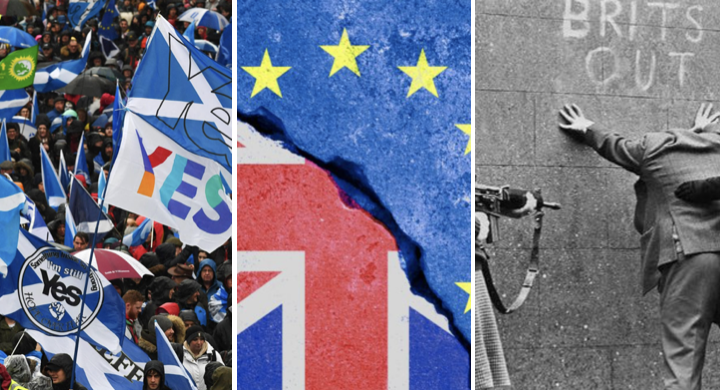 By TruePublica Editor: Remember David Cameron in 2010 promising to fix ‘Broken Britain‘? He promised to call up a 5,000-strong army of full-time professional community organisers modelled on the American scheme which saw Barack Obama come to prominence in Chicago. His “big idea” for the 2010 general election was to create a “big society” in which control of some public services would be devolved to charities, voluntary and community groups. Looking back – it was all so quaint in comparison to what his real legacy was. It was also just a con to get votes – as there was nothing much wrong with Britain in the first place.

“Big society not big government” is what Cameron promised. A ‘Big Society Bank’, funded from unclaimed assets in dormant bank and building society accounts was announced. He promised to tackle poverty, drug and alcohol abuse and ‘incivility on our streets’ and the curse of ‘families falling apart.’ He promised to ‘build a fairer, richer, safer Britain, where opportunity is more equal and poverty is abolished’. “Some people say that there are no big ideas in politics anymore. But I think this is about as big as it gets,” he said. He insisted that funds would be directed to the most deprived. Ultimately, he promised  that the big society project ‘would take power away from politicians and give it to people.’

What was wrong was politicians allowing the banks to crater the economy, which hoovered up well over £500billion of cash, lumped onto the national debt to keep them afloat, which ushered in a new ideology called austerity. After Cameron was elected (in coalition) it was downhill all the way. At first, the decline in everything was not that noticeable but by 2015, just about all the indicators to falling standards of life in general were heading south. Homelessness, poverty, child poverty, inequality, education, health, welfare, personal and household debt, elderly care, nutrition – you name it – austerity knawed away at the very fabric of daily life for everyone, including the waning middle-classes. The bankers continued buying Porsche’s with annual bonuses, the offshorers continued to contribute nothing and the very rich and the politically crooked took advantage of the crisis to feather their nests in silks and gold thread.

Cameron’s promises were all just lies.

One small example of this was crime. In the UK crime had fallen by 45 per from 1995 to 2010, according to the British Crime Survey. This was largely due to a drop in burglary and vehicle theft. However, the Tories only pointed to a rise in serious crimes such as those involving the use of guns and knives ging the impression of widespread crime. Typically, the right-wing press frightened the public into thinking burglary, theft and murder was a normal occurrence on a daily basis all over the country. They did the same by pumping out misinformation over civil society in general.

Cameron’s initiative, the ‘Big Society Network’ – run by a charity called The Society Network Foundation was poorly funded and ended up closing after just four years amid allegations of misuse of funding. In the end, it crashed with the administration owing money to the taxpayer. With just £2million in funding, it was hardly going to fix ‘broken Britain.’

But by far, Cameron’s biggest disaster was Brexit. Advised against offering a referendum on EU membership by everyone in the know – from think tanks to senior Tory MP’s, from the security services to world-renowned economists, Cameron – little more than a public relations mouthpiece for the corporations – offered a protest vote to the tens of millions of disaffected in the form of a referendum. Cameron span the wheel of fortune – with the corporations funding the Leave campaign. As Foreign Policy wrote back in 2016, Cameron “will be remembered as the prime minister who presided over the beginning of the end of the United Kingdom.”

Gambling the family silver (in this case, the economy) is one thing, gambling the title deeds (the union of Gt Britain) was quite another. Cameron lost his gamble – and 67 million people will pay the price as Brexit has proven time and time again to have so few upsides as to be worthless in consideration. Without the pandemic, Brexit has been calculated by the government to cost the economy £200billion by the end of this year alone. In addition, trillions in assets from investments, banking, cash, property and company ownership and so on have been relocated to the EU – typically Ireland, France, Germany and The Netherlands.

Worse still, power moved from a chancer to an opportunist in the form of Boris Johnson. Having lied his way to No10, Johnson played all of Britain’s cards badly. He backed the Trump/Bannon ideology and look where that’s ended up. Brexit – you know, where we hold all the cards – is now really a choice of two bad hands. The first is a deal with the EU in which Britain will be fundamentally worse off in every area of the economy possible. The second is no deal – which would be worse. No-one has been able to demonstrate an economic model that shows how in overall terms, Brexit will benefit Britain.

Johnson is now facing being mugged by the reality of his own lies.

One only has to look at his private life to see where he is going. With failed marriages, children that refuse to speak to him, along with a string of affairs and now court cases building over corruption in office – Johnson is already talking of leaving his post. The reality is though a cold civil war has been raging in the Tory Party for some months now. The factions fighting it out are Cummings and his anarcho-capitalist libertarian headbangers who are turning the country into a failed state, and a growing group of neo-Thatcherites. The likelihood though is that latter, by their nature are bigger, better funded, longer in the tooth and ultimately stronger. The writing on the wall for Johnson is already in clear view – hence all the rumours that he’ll be leaving office within six months of the start of 2021.

In the meantime, Britain is facing an age of dark clouds not the sunny uplands as promised.

It is evident to anyone paying attention that ‘Global Britain’ has been seriously diminished by Brexit and all the indicators are there that the Union will fracture – first with Scotland. The government has confirmed it not approve another Scottish independence referendum for at least 25 years and even hinting it maybe 40 years. If it doesn’t – an ethno-nationalist conflict will quite likely build just as it did with ‘The Troubles’ in Northern Ireland. And if the government doesn’t change course quickly on the Internal Markets Bill – Northern Ireland could well join them sooner than later. Northern Ireland was not a religious conflict as many believe. It was primarily political and nationalistic, fuelled by historical events and a government in Westminster who thought they knew best. It lasted – a generation when the stalemate of death and destruction ended with the Good Friday Agreement – now threatened by Boris Johnson. You can see history repeating itself, can’t you.

Broken Britain truly is broken now and on the verge of a national meltdown.