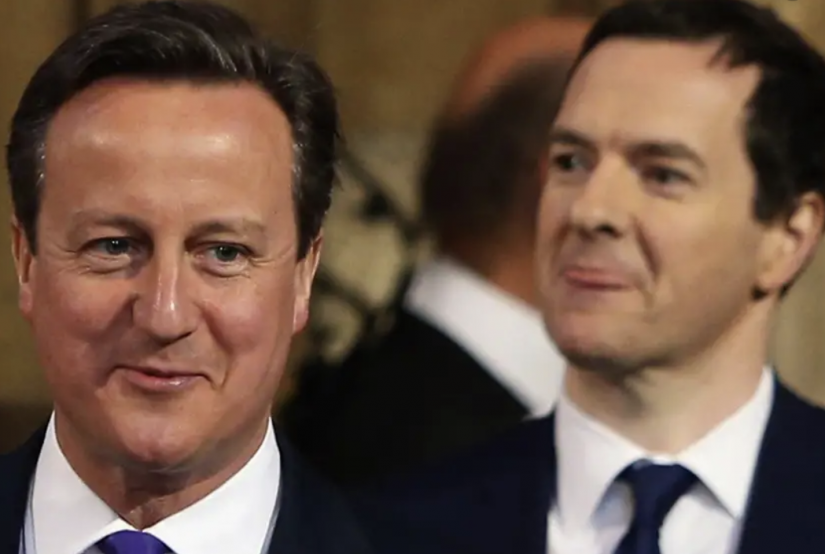 By TruePublica: David Cameron has no shame whatsoever. He has, cynically, come out of hiding – simply to promote his new book and make some money from an ongoing catastrophe of his making. For the last three years he hid from the political landscape he set fire to and finally pops up to say that he has ‘no regrets’. He even tried to shift the blame in an interview to publicise his book, where, according to him, Boris Johnson told him the Brexit campaign would be “crushed” during the referendum campaign. As if anyone took notice of Johnson in 2015, least of all David Cameron – a man who took no notice of senior civil servants or even the security services. But there’s more to come from his legacy of breaking Britain.

Every mainstream newspaper quotes about his forthcoming memoirs, where he admitted that he had underestimated “the strength of feeling that would be unleashed both during the referendum and afterwards”.

It was David Cameron and David Cameron alone who unleashed this nightmare. He owns this nightmare. He was strongly warned against it, after all, it contributed to the toppling of John Major and his idol Margret Thatcher. But in another cynical action to save his own skin in an election he thought he might not win, he decided that winning fifteen seats in the 2015 election was more important than the threat of ruining the country. It’s difficult to believe that that election was only a few years ago now. The British political, economic and social landscape has been irrevocably changed through his irresponsible stewardship of a political party once described as the most successful in a democracy the world had ever seen. Today, that party lies in ruins and democracy is threatened. Behind it is the social catastrophe that the same party is now walking civil society straight into.

Meanwhile, Cameron’s (second) successor, Boris Johnson, through his sociopathic advisor Dominic Cummings is ruthlessly exploiting divisions that Cameron created in the first place. The political parties (of what was once the United Kingdom) are pitting the people against their own elected representatives. and then turning in on themselves.

Worse still, is not the gloom of economic forecasts, medical or food shortages or the political battles in Westminster that still lies ahead – but what is happening to civil society. People, communities, towns and cities are now in a state of war mentality driven by this government. The language of politicians – an “outrage”, a “coup”, an “abomination”, a country tumbling into “failed state status”, Britain a “banana republic”, Boris Johnson a “tinpot dictator” is being echoed across the land through spit clenched teeth and pointing fingers. To stop the critics and the rule of law – Britain’s latest PM has shut parliament down and locked its doors to representative democracy that just turns the outrage volume up another notch.

The cool charm of Britishness has vanished, and newspapers around the world now run article’s entitled “Will Brexit trigger the Nation’s next civil war?” and “Is Britain Becoming a Failed State.”

Meanwhile, in the Westminster bubble, as Abby Innes, an Assistant Professor of Political Economy at the London School of Economics says –  ‘No deal’ for this group promises an unprecedented fire sale of UK public, corporate, and land assets. That the extreme economic purpose of Brexit has been successfully conflated with an act of national liberation from tyranny is a product of a skilful charismatic politics, a polarised social media landscape nevertheless driven by conventional media skewed ever further to the right.”

Britain is on the verge of submerging its economy in increased debt caused by Brexit after a decade of austerity, that failed an entire nation. Tens of thousands have died at the hands of the Conservative party during austerity, millions pushed into despair and all the while, eyes are averted from this social calamity.

We’ve become numb, indifferent and anesthetised to the word ‘crisis.’ As this political firestorm sweeps the nation, there’s an ongoing crisis in every corner of society where no-one is left untouched, except those that afford it the most. Homelessness now kills someone every 19 hours on the streets of Britain, 17,000 disabled people have died desperately fighting the state for a meagre financial leg-up that they were denied. Councils are going bust and selling assets illegally to pay the bills. There’s a crisis with our elderly, our young and anyone who slips up or trips over in between.

We now live in a world where the culture of lies and populist scapegoating becomes the only option of our leaders. Brexit has offered a thick seam of just that. Monopolising power is now the end-game. It’s all they can see. Worse still, it’s all that the rest of us can see as well, as we no longer protest moderate politics being purged.

The result of all this is that government has been preparing for a civil uprising. Don’t think they haven’t – it’s the one thing that they really are scared of. The operation to defend their version of democracy in another leaked document is to measure the battle rhythm on the streets. Make no mistake, the threat of bricks and bottles being thrown at the political elite who caused pent up anger and frustration to explode will be met with a surveillance state with police state like powers who will be armed to the teeth. 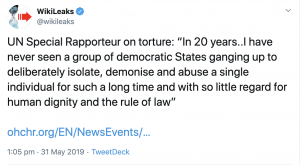 It was David Cameron’s Home Secretary Theresa May who set up the very worst of the surveillance state. One look at how Julian Assange is being treated in Britain is enough to turn any protestor pale with fear today.

Prof Nils Melzer is the UN Special Rapporteur on Torture and Other Cruel, Inhuman or Degrading Treatment or Punishment. He visited Assange in Belmarsh high-security prison in early May, and concluded that he “showed all symptoms typical for prolonged exposure to psychological torture”.

“The only realistic explanation for this sustained systemic failure of the judiciary are that states are trying to make an example of Mr Assange before the eyes of the world.”

It is, as Meltzer quite rightly points out, that all three branches of state power – government, parliament and judiciary – have failed to show the impartiality and objectivity towards Mr Assange that is required under the rule of law.

This is Britain today.

Just a few years ago, the UK self-identified itself as a stable, tolerant and moderate nation, with a crown to symbolise its traditions that had been honed down the centuries. It wasn’t so ling ago we were celebrating ‘Cool Brittania‘. Now the country is revealed as little more than ferociously divided.

Nobody knew what David Cameron’s decomposing political corpse stood for until recently. But now we know. All he ever believed in was keeping his job at the top and making money out of it when he left it. But we should not forget about David Cameron as he should be held up as an example of the very worst in what Eton and what a very dangerous political class spews out today.

Cameron has left a legacy though. One nation Conservatism has gone up in flames – it is now the most right-wing government Britain has had for over 200 years. He is responsible for crushing the NHS, for killing thousands through a failed ideology called austerity that the United Nations has called out as the “systematic immiseration of a significant part of the British population“.

Another legacy is the cutting of the top rate of income tax, whilst tax credits to the poorest households were sliced and a bedroom tax designed purely out of spite drove even more desperation. These are the actions of the class warfare dogma bestowed to him in his school years.

And let’s not forget about another global disaster Cameron created. He illegally attacked the stable state of Libya, the wealthiest country in Africa and turned it into a slave-trading nation full of tribalalist gangs and some of the worst terrorists on the planet. The immigration cork he was emphatically warned about blew massive holes in the European Union’s project as tens of thousands attempted to escape the murderous nightmare of a failed state. How many were raped, murdered or drowned on the way is not known. I’ll bet that’s not in his memoir.

Cameron did something else no other peacetime Prime Minister had ever done in Britain. He rolled out an assassination programme specifically targeted on British citizens abroad. Extra-judicial assassination was outlawed in Britain even during the last World War. It was a no-go area no matter what the geopolitical landscape. But Cameron thought the better of it, sanctioned it and personally gave the authority to kill irrespective of the danger presented to innocent civilians. Years later, we have drone attacks on foreign soil where no war is being conducted, where over 90% of deaths are innocent bystanders who got in the way of a target.

Then we saw Cameron give permission for another atrocity. He had his henchmen walk into a Britsh mainstream newspaper to trash their computers because of a whistleblower called Edward Snowden. Anything the state doesn’t like today is now dealt with in the name of national security. Our civil liberties have been ripped away from us all and with it any semblance of privacy.

All these things we’ve forgotten about because what we are dealing with today seems far worse. And it will get worse. Much worse, because that is the trajectory we are on today in large part to David Cameron.

Don’t buy his book – he doesn’t deserve to be paid for the living nightmare of his legacy soon to be lavished upon us – it would feel like an act of treachery, like you were letting down the country in its time of need.