Inside IndyRef2 – Looking forward to a new future 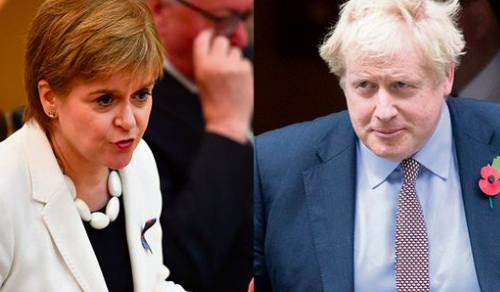 By Norrie Hunter: It is getting colder; the snow is on the mountain tops and as we try to keep warm in Scotland, we have the lukewarm General Election to endure.  This is cold comfort for those of us who want real change in Scotland.

I had a visit from a Conservative canvasser asking me for my vote. I asked what his party stood for and it could have been a robot by his response. ‘We are determined to stop Sturgeon from wrecking our precious union’ he muttered. I winced in agony but decided to ask is that Nicola Sturgeon our First Minister the one that has delivered free tuition, free prescriptions the best NHS in the British Isles and a whole raft of popular policies. Yes, but we are better together in the union and we will see the rewards of voting Conservative, he replied.

This election is one of the most important elections in Scotland’s history. We are at the mercy of Boris Johnson and his right wing neoliberal cabal who are hell bent in taking Scotland out of the EU despite 62% wanting to remain. I asked one more question before I felt the will to slam my front door. Tell me, I asked, why the Conservative candidate has ignored the wishes of the constituents who have voted to remain and support the Conservative party who want to leave. Again, a robotic standard reply. It was a UK wide vote and we must respect that he said.

The big disappointment is the lack of policy decisions on Trident or Broadband connectivity or pensions which have been on the political agenda pre the election.

The big disappointment is the lack of policy decisions on Trident or Broadband connectivity or pensions which have been on the political agenda pre the election. We want to know why we have the lowest pensions in Europe, we have vast areas of Scotland yet to have broadband vital for many businesses – and in Scotland we want nuclear weapons on the Clyde removed due to the cost and immorality of these weapons of mass destruction.

But no, we get TV debates where three unionists and one independent candidate line up to tell us their parties manifesto plans. All three candidates from the Liberal Democrats, Conservatives and Labour are really branch managers and are told to do what the party HQ in London tell them. Only Nicola Sturgeon is a true leader as she is our First Minister and the SNP have always been Scottish based.

Predictably the debate turned into a shouting match with the Conservative referring to the FM as ‘HER’ and her plans to wreck the union. No amount of Brasso was available for his neck as it’s his Conservative party wrecking our wish to stay in the bigger union that of the EU. Feminists and others complained of this thuggish behaviour towards the only female on the panel, but it also highlighted the dearth of acumen and skill from the unionist politicians. When you have to shout at and over your opponent when she is speaking means you have lost the argument. So desperate to paint the FM as a wicked witch they forget the audience watching them.

This is replicated all over the UK as Boris Johnson blunders his way from TV studio to stage managed hospital visits. This man is a serial liar denying all accusations of his past life which suddenly appear on social media to make the point he has failed to be honest with the voters. Honesty is a stranger to modern British politics. It is make-it-up as you go along. ‘The will of the people’ and ‘we must honour the referendum ‘GET BREXIT DONE’ are the soundbites which, of course, is complete tosh – as trade deals and tariffs have not yet been worked out as no assessment plans have been drawn out. But don’t let that get in the way of a good soundbite.

Labour are as bad they highlighted the fact the Welsh NHS was performing poorly due to a lack of funding from the Conservative Party. Plaid Cymru were the first to point out that it was the Labour group who are in charge of the Welsh Assembly who have overseen the shambles in the Welsh NHS. Why is it then that Nicola Sturgeon and the SNP are criticised on a daily basis by the Labour party while delivering the most successful NHS in the UK? This deceit is down to a failure of giving a decent prospectus to the people and blaming others while trying to avoid scrutiny.

The Liberal Democrats are really not worth discussing. They default to the line if you think a 40 year union is difficult then, what would a 300 year old union be like. For starters Scotland would produce a white paper and have a deal with a plan and only have one other country to deal with. If the Czech Republic and Slovakia can do it why can’t Scotland. It’s a bogus argument

Well not long now until we can return to some sort of normality and we can enjoy Christmas – well those of us with a roof over our head and lucky to be warm, while others look at the missed opportunity to ask questions about austerity and poverty. I really hope Santa can bring us a new level of political discourse for Christmas