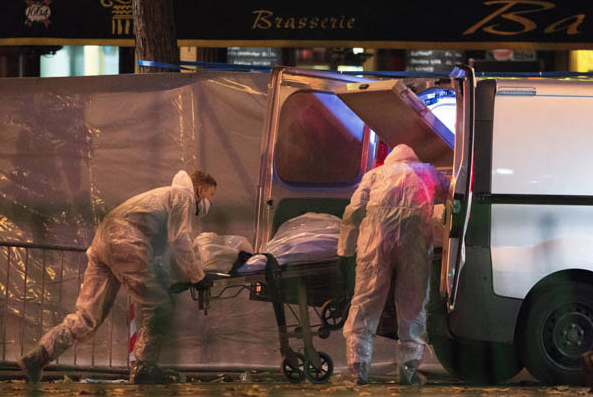 By TruePublica Editor: There is something deeply disturbing when reading about citizens being murdered by terrorists and the state not acting when it clearly could have. It raises many questions, not least, by providing oxygen to the tin-foil-hat-brigade. In this instance, you would think you were reading from one of their websites. That is until the victim’s families sue the state for exactly that. Specialist armed anti-terror soldiers in the immediate vicinity were stood down when they could have defended their citizens from being slaughtered. This story, not published in the British corporate media is published in various French news outlets.

By Thelocal.France: “A group of survivors and families of victims of the 2015 Paris terrorist attack at the Bataclan concert hall in Paris has filed a lawsuit against the French state over its response during the police operation that night.The group which includes 17 victims and families of victims wants to know why eight soldiers from the “Sentinelle” anti-terror patrols armed with assault rifles, who were outside the concert hall while the massacre was taking place inside, were told by their superiors not to intervene.”Ninety people died at the Bataclan that night after Islamist terrorists opened fire on the crowd inside. Another 40 people were killed that night in attacks on bars, restaurants and at the Stade de France stadium.While many escaped the Bataclan horror, scores were taken hostage or hid inside the music venue until specialist police teams stormed the venue much later in the evening.Families believe the death toll at the Bataclan would have been lower if soldiers had had the right to intervene when the attack was in its early stages.

Sebastien Gomet, one of the complainants, who lost his little brother Cedric in the attack told Le Parisien newspaper:

“This will not bring my brother back but it’s a step towards the truth. There would not have been the heavy death toll of 90 victims if the soldiers had been able to intervene. I want the French state to recognise it is responsible for the scale of the tragedy.”

They have lodged a legal complaint against the French state for the act of “not assisting a person in danger” , which is a criminal offence in France.

This is not the first time families have tried to shed light on the soldiers’ actions.

In 2016, another group of victims and their families asked unsuccessfully for an investigation to be opened into why the soldiers were not allowed to give their weapons to the police officers.

“Clearly, an order was given to the “Sentinelle” soldiers not to open fire, even while they were there to target the terrorists,” said Georges Fenech, a former magistrate who headed the parliamentary inquiry commission on the attacks, told BFM TV. “We’ll never know who gave these orders, but it is unbelievable”.

“The police officer called their superiors and the response they got was: Negative. ‘You do not intervene militarily on national soil, we’re not in a war zone’,” Fenech added.

Fenech said the soldiers were under civil authority because thy were on French territory rather than on foreign soil, which meant they were under the command of the prefecture of police and ultimately the Interior Ministry.

When he asked an army commander about he response Fenech said he and other MPs were shocked by the response.

“The military commander told us ‘I do send my soldiers into a bottle of ink’, meaning ‘I don’t know what’s going on inside so I cannot put my soldiers in danger,” Fenech said.

Thousands of Sentinelle soldiers were sent out to patrol the streets of Paris in the aftermath of the Charlie Hebdo attacks in Paris in January 2015 to guard sensitive sites and reassure the public.

Since the Bataclan attacks, Sentinelle soldiers have opened fire during terrorist attacks at the Louvre museum in Paris, at Marseille train station and in Orly airport.

“Things have evolved, protcols have changed, training has changed,” said Fenech. “Unfortunately on November 13th the Sentinelle force did not have the active role that would have expected.

“Of course there were failings. We were not ready on November 13th. Who could have imagined such a massacre in the middle of Paris.”