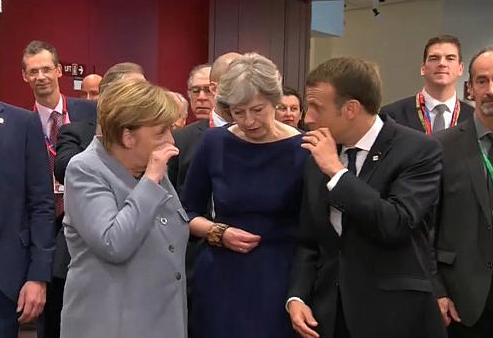 By Graham Vanbergen: Michael Fuchs at the Guardian got it right when he said yesterday that Donald Trump’s decision to pull the United States out of the Iran deal “could place the lives of Americans – and people around the world – in danger”. He quite rightly pointed out that Trump and his administration had simply manufactured a national security crisis across the world for no sane, level-headed reason.

At TruePublica we reported yesterday that: “In the almost three years since the (Iran) deal was signed, not only has the IAEA confirmed that Iran is complying with the deal but the Trump administration – the very administration now violating the deal – has repeatedly verified Iran’s compliance. The US secretary of defence, James Mattis, said the verification mechanisms in the deal are “robust”, and the head of the IAEA called them the “world’s most robust”.

As I predicted the response from Israel and Iran would be made plain on day one. Israel has said it attacked Iran’s forces across Syria overnight in response to Iranian rockets fired into the occupied Golan Heights. This is the first time that Iran’s military has actually fired rockets in a direct strike on Israeli forces, and marks a significant escalation within 24 hours of America’s irresponsible actions.

Israel, if anything will want to stoke Iran into the fight as soon as possible for fear that European support for the nuclear deal might mean more diplomatic and economic support to stop Iran being attacked in the first place. Expect Israel to go in hard and fast soon.

I also said that Saudi Arabia would want to defend itself from a nuclear-armed long-time foe and join the arms race. Hence, within 24 hours, the announcement is made thus: Washington (CNN) – Saudi Arabia’s foreign minister told CNN on Wednesday that his country stands ready to build nuclear weapons if Iran restarts its atomic weapons program.

Trump has already created more than just a few disagreements with his allies in Europe.  Having pulled out of climate change  agreements, trade and others, Trump has alienated those that would normally have toed the line behind bully boy America.

This assinine and arrogant geopolitical manoeuvre by America does more than just threaten peace across the Middle East. It could set the entire region on fire and start a nuclear arms race where no-one would sign up to regulatory agreements of any kind. But as I said, this a truly pivotal moment. This moment may well prove difficult, but nevertheless, this is really important.

The Old World, Europe, has had enough of Trump, enough of America and no longer consider the USA as ‘partners’ any more.

US President Donald Trump’s decision to leave the Iran deal represents his third strike against the  European economy in half a year and will add more volatility in an already difficult period. As EU institutions are debating whether Europe’s economic growth is nearing the end of the cycle after years of robust recovery, Trump’s announcement has fuelled oil prices and increased the uncertainty for European companies doing business with Iran.

Euractiv echoed what many political and economic commentators have already stated in Europe. This is the third decision taken by Trump since last autumn that is threatening the global economy, in particular, European expansion.

EU representatives are already in discussions with Tehran and arranging a crisis meeting in London this coming Monday, with the Iranian president Hassan Rouhani saying Europe had a “very limited opportunity” to save the deal.

In the meantime, the EU has already vowed to take steps to immunise firms from any US sanctions.

Macron, May and Merkel, along with the EU27 are making a stand. Ministers have recognised that Iran will only stay inside the deal if they are 100 percent confident that the promised economic benefits hold true and that Iran and EU companies can survive the American sanctions assault.

The EU has all but declared it is now on an economic collision course with the United States of America.

America’s planning on this appears to be dire. They are hoping that a tightening of sanctions will be so destructive that popular uprisings will end with regime change, which has clearly been the intention of the US for many years up to Obama’s intervention in 2015 with this deal. 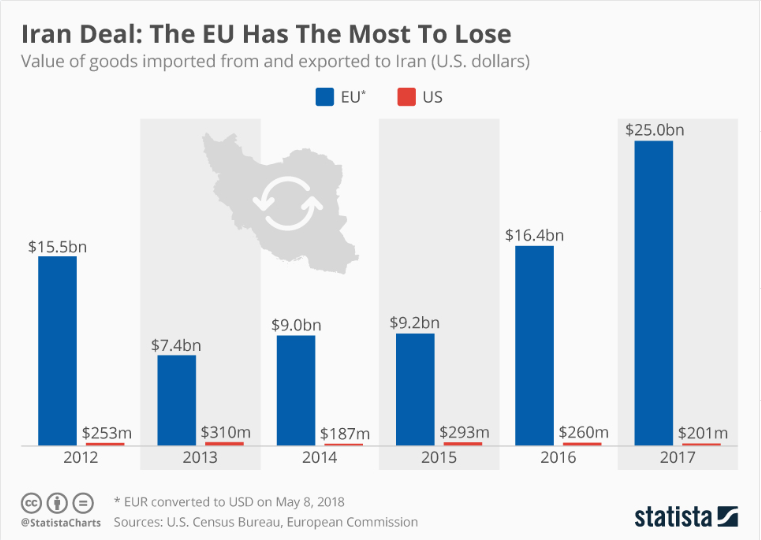 “Trump claims he is going to pursue a better deal, which is a long-held myth,” Kelsey Davenport, director for nonproliferation policy at the Arms Control Association, said. “He doesn’t stand a chance of getting the requisite international support for sanction pressure or a negotiating strategy to make that a realistic goal.”

France, Germany, Italy and the UK are all financially committed to Iran’s deal holding up. It’s a new market with 80 million citizens and most are young – it’s a valuable market.

The extent of new business for the EU is clear. The EU did $25 billion of trade with Iran in 2017, the US did less than 1 percent of that. By 2020, the expectation was a brand new market delivering well over $30billion. And that’s without the big deals, that’s just general trade.

Dieter Kempf, president of the Federation of German Industries (BDI), said the country was not prepared to give up on Iran as a market. “Our firms have invested a lot of hope in the market openings that resulted from the lifting of the economic sanctions,” he said.

French Finance Minister Bruno Le Marie complained that it was “not acceptable” for the US to play “economic policeman of the planet”.

Much as I said yesterday, the anger being centred at the American administration will be palpable. And it is already.

Caroline Galacteros, a geopolitics and strategic intelligence expert, believes the US pullout could present the EU with “a big opportunity” to come up with a unified response to a system that has long rankled European powers.

“It’s up to us to decide in the end if we really want to accept this extraterritoriality of US law. That’s the big issue in my opinion. It can be a real shift in the balance of power,” said Galacteros on the FRANCE 24’s Debate show Tuesday. “If Europe sticks to the deal, and the Iranians are cautious and won’t hit back – because that’s what Washington is probably expecting from them – then we have Europe and Iran sticking to the deal, as well as Russia and then China… It all transforms the balance of power.”

Some European governments have already begun implementing measures for European and Iranian firms to bypass US law. France’s state-owned investment bank Bpifrance announced a plan to offer dedicated, euro-denominated export guarantees to Iranian buyers of French goods and services, bypassing any US links.

Italian authorities also worked out a similar deal, when Rome and Tehran agreed on a framework credit agreement to fund investments in Iran worth up to €5 billion via the Italian state-owned holding Invitalia.

The biggest losers are of course, to be French aviation giant Airbus, which already has booked orders from Iranian airlines for 100 aircraft for a total of $20.8 billion. In addition, French oil firm Total, which in association with the Chinese group CNPC has signed a full working agreement for a $5 billion investment to exploit Iran’s South Pars deposit. These deals are in excess of the $25billion already being traded by smaller companies.

Ellie Geranmayeh, a specialist in Iran-European relations at the Brussels-based European Council for International Relations, say the Europeans will probably “negotiate exemptions with the US so that they can continue to trade with Iran in strategic sectors such as energy [oil, gas] or aeronautics”, she explained.

If not, there’s another more drastic measure being considered. This is the replacement of its so-called 1996 Blocking Statute, which prohibited European companies from complying with US extraterritorial laws. Twenty years ago, when the Clinton administration threatened sanctions against European companies in the same Iran sanctions battle against Europe, the EU passed these blocking statutes giving companies cover to continue with business as usual. Clinton was forced to back down. The George W. Bush administration kept the sanctions on the go but did not enforce them for fear of sparking a trade war with Europe.

But as I said yesterday, this time, it’s not just about trade. It’s about peace in the Middle East, it’s about Europe being torn apart by a migration crisis because of the Mid-East, the world order being ripped up by American thuggery for their own selfish economic reasons – and just about everyone has had enough.

Iranian President Hassan Rouhani has already hinted that a deal might be acceptable. From a diplomatic point of view Tehran has already said it is willing to give European powers “several weeks” to come up with a solution before he ordered Iran’s Atomic Energy Organisation to resume uranium enrichment “without limit”. This is a signal, a willingness to cooperate as long as Europe takes a tough line with America. If it does and Tehran is convinced, America will be economically sidelined in more ways than one.

Russia is already heavily sanctioned, China is facing a tariff war and now so is Europe. All three trade with Iran. All three now have the same grievance and collectively, they hold considerably greater weight than any American President – the bully-boy-in-chief included.

Theresa May now genuinely has an opportunity to show some ‘strong’ leadership and create a ‘stable’ situation. Most people in Britain do not like Donald Trump and most do not like the US/UK trade deal that Liam Fox is cooking up behind closed doors. Poll after poll shows how unpopular the US/UK trade deal is. May, right now, could shift the balance of power on our own trade deal, get off the backfoot and join the big club and pushback. The Old World could strike back. The Daft Evader might find himself worlds away, economically sidelined – as winner takes all. In the Mid-East it could even be a case of ‘Peace be upon us’ – for once.