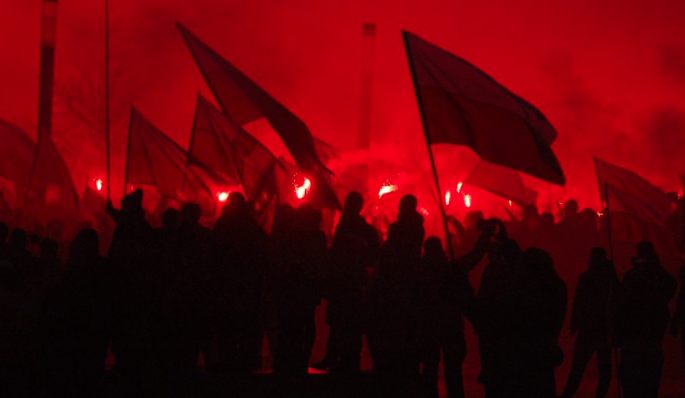 US Christian right ‘fundamentalists’ linked to the Trump administration and Steve Bannon are among a dozen American groups that have poured at least $50 million of ‘dark money’ into Europe over the last decade, openDemocracy can reveal today.

Between them, these groups have backed ‘armies’ of ultra-conservative lawyers and political activists, as well as ‘family values’ campaigns against LGBT rights, sex education and abortion – and a number appear to have increasing links with Europe’s far right.

They are spending money on a scale “not previously imagined”, according to lawmakers and human rights advocates, who have called our findings “shocking”. Reacting to openDemocracy’s findings, a cross-party group of more than 40 MEPs has called on the EU’s transparency tsar Frans Timmermans to look into the influence of “US Christian fundamentalists… with the greatest urgency” ahead of May’s European Parliament elections.

Among the biggest spenders is a group whose chief counsel is also Donald Trump’s personal lawyer, Jay Sekulow. Another organisation has collaborated with a controversial Rome-based ‘institute’ backed by Steve Bannon. And a number of the groups are connected to the World Congress of Families: a network of ultra-conservative activists which has links to far-right politicians and movements in several European countries, including Italy, Hungary, Poland, Spain and Serbia.

None of these American groups discloses who its donors are – though at least two have links to famous conservative billionaires, such as the Koch brothers (who helped bankroll the Tea Party Movement) and the family of Trump’s education secretary.

Trump, the far right and the Christian ‘legal army’

Two of the Trump-linked American groups examined by openDemocracy are Christian right legal powerhouses: Alliance Defending Freedom (ADF) and the American Center for Law and Justice. Together, they have spent more than $20 million in Europe since 2008

They don’t disclose their funders, but US journalists have previously traced at least $1 million in grants to ADF from a foundation controlled by the billionaire family of Betsy DeVos, Trump’s education secretary, and Erik Prince, founder of the Blackwater mercenary firm.

ADF was co-founded by Alan Sears, a US Christian right leader who co-authored a book against “the homosexual agenda”. It is increasingly active internationally, including in Latin America. It supported a 2016 law in Belize making gay sex punishable with 10 years in jail.

This group tripled its annual spending in Europe between 2012 and 2016, to more than $2.6 million a year. It now has offices in Belgium, France, Austria, Switzerland and the UK, and spends hundreds of thousands of euros lobbying EU officials, according to separate transparency data.

Among its European projects, the group has supported the defence of a notorious German activist who compared abortion to the Holocaust and accused specific doctors of murder.

This year, ADF International also co-hosted an event with the French group La Manif Pour Tous, which has been previously been linked to the far-right party Front National.

Ahead of the last European Parliament elections in 2014, La Manif Pour Tous launched a ‘Europe for Family’ campaign which got 230 French candidates to sign a pledge opposing marriage equality, trans rights and sex education.

Speaking to openDemocracy, a spokesperson for ADF International said they are “exclusively privately funded by people from all over the world, who care about human rights” and that its activities include “advocating for freedom of speech in Europe”.

Asked for more detail about who the group gives its money to, they said: “Since our advocacy involves court cases in countries where people are harassed, stigmatised, and even killed because of their religious convictions, it is our general policy not to disclose any recipients of funding in order to protect their personal safety and livelihoods”.

The second of the two Trump-linked groups, the American Center for Law and Justice (ACLJ), also operates through the courts. It was founded in 1990 by American televangelist Pat Robertson to oppose the American Civil Liberties Union.

The group’s current chief counsel is Jay Sekulow, a conservative talk-show host who has been described as “the top lawyer” on Donald Trump’s legal team in the Mueller inquiry.

For more than 20 years, this group has had an office in Strasbourg, France – home of the European Court of Human Rights – from where it has intervened in numerous cases on issues including same-sex marriage, abortion rights and artificial insemination.

The director of its Strasbourg outfit has also represented the Holy See at the Council of Europe, while its Moscow centre has praised Putin’s laws banning “gay propaganda”.

The Billy Graham Evangelistic Association is another major spender. It is led by the famous US evangelical preacher’s son, Franklin Graham, who said Satan is the architect of same-sex marriage and described Islam as an “evil and very wicked religion”.

Franklin Graham, who has supported Trump as someone who “defends the faith”, was in Russia earlier this month meeting Kremlin officials who are under US sanctions, on a trip that he said was personally signed off by Vice President Michael Pence.

In 2018, his group organised festivals in England and Scotland amid protests from Muslim and LGBT rights groups. It also supports “rapid response chaplains” that target crises and have been accused in the US of “chasing ambulances” and “exploiting tragedy”.

Its filings disclose more than $23 million spent in Europe through two different US entities between 2008 and 2014 – making it the largest spender in this region, of the American groups analysed by openDemocracy.

However, 2014 is the latest year for which we were able to find public documents for this group, which has offices in the UK, Germany, France and Spain, so the true extent of its influence in the region is not yet known.

Training Europeans, on the ‘front lines of the Culture War’

A number of groups spending smaller amounts of money appear to have increased their activities in Europe in recent years.

The Acton Institute for the Study of Religion and Liberty, which combines a conservative Christian worldview with free-market economics, has received hundreds of thousands of dollars from the Koch family foundations

In Italy, it has collaborated with the Dignitatis Humanae Institute – of which Steve Bannon is a trustee – that has locally controversial plans to use a monastery outside Rome as a “gladiator school for culture warriors”.

Also on the list is the US branch of the Tradition, Family and Property (TFP), an ultra-conservative transnational Catholic movement that says it’s“on the front lines of the Culture War, peacefully defending the values of tradition, family and private ownership”.

This group said it spent about $100,000 in Europe since 2010. Its filings don’t detail where this money went but the TFP has been linked to a controversial ‘think tank’ in Poland that has helped develop policy for far-right Law and Justice (PiS) politicians.

Under US law, the groups analysed by openDemocracy are required to publicly disclose some information about their foreign spending, but not the names of their overseas recipients, details of what activities they fund – or the identities of their own funders.

The $50 million figure drawn from openDemocracy’s analysis is also a likely underestimate of the resources that US conservatives have channelled into Europe in recent years.

Data for 2018 is not yet available; meanwhile, there are some important loopholes. Religious organisations registered as churches, for example, don’t need to file the same disclosures.

A number of other US Christian conservative groups appear to be spending money in Europe, but do not disclose this on their US filings – including the Howard Center for Family, Religion and Society, which has coordinated the WCF network.

“The scale of this meddling by US extremists is shocking”

Reacting to our findings, German Green MEP Terry Rintke, who sits on equality-related committees at the European Parliament, has said: “This extreme extent of financial support flooding the EU is shocking – especially with the European elections ahead of us.”

The SNP MEP Alyn Smith has said he and his fellow parliamentarians who signed today’s letter have called for the mobilisation of “EU institutions and member states in preventing malign actors such as those identified in the investigation from interfering in the European Parliament elections in May – and beyond”.

Caroline Hickson, regional director of the International Planned Parenthood Federation’s European Network, said: “The scale of this meddling by US extremists is shocking, but sadly no surprise to us. Every day European societies face concerted attacks by outside forces seeking to impose reproductive coercion… This is utterly at odds with the European values of democracy and human rights.”

“This is dark money coming into Europe to threaten human rights, and we’re not doing anything about it”, warned Neil Datta, secretary of the European Parliamentary Forum on Population and Development, describing the amounts of money involved as “staggering”.

“It took the Christian right 30 years to get to where they are now in the White House,” he said. “We knew a similar effort was happening in Europe, but this should be a wake-up call that this is happening even faster and on a grander scale than many experts could have ever imagined.”