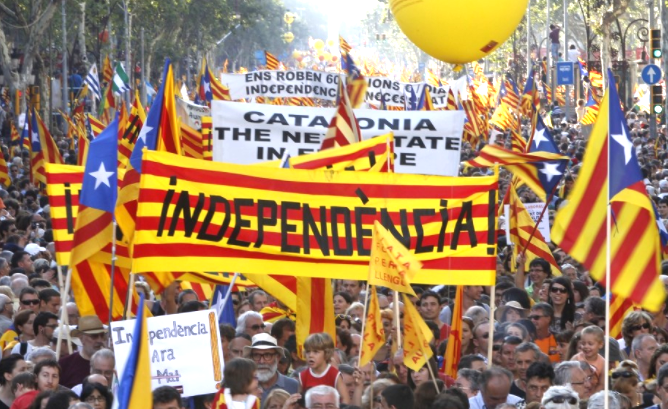 By Craig Murray: Most of the states existing in the world – including pretty well all of Africa bar Ethiopia, much of Asia, and the former Soviet Union – achieved independence in my own lifetime. In virtually every case, it was – almost by definition – illegal at the start of the process for the country to break away.

All of the most famous liberation campaigners did jail time. Within the European Union, Latvia, Lithuania and Estonia did not obtain Independence by a process negotiated from the start with the Soviet Union. The actions which initiated their Independence were illegal.

So it is a meaningless truism to say that it is illegal for Catalonia to hold a referendum on Independence. The idea that the right to self-determination of a people can be alienated by pre-existing constitutional arrangements, is rejected by international law.

It is truly pathetic to see the Establishment throughout Europe hiding behind the miniscule fig leaf of the Spanish Constitutional Court to state that Catalonia cannot secede, and therefore the gross repression in train by the Spanish government is legitimate. The argument that the post-Franco settlement perpetually alienates the Catalan right to self-determination is, frankly, risible. It is simply embarrassing to see media outlets that once had some intellectual capacity, such as the Economist and the Financial Times, fall in behind it.

But the desire of Western governments to accept the brutal muscling aside of democracy in Catalonia by Madrid’s Francoist government, tells us something about the level of insecurity the Establishment feels. Scottish nationalists like myself have an instinctive sympathy for a similar movement in one of Europe’s other ancient nations. But in truth, there are serious differences. The Yes movement in Scotland is essentially socialist and is broadly looking to substantial economic and social reform to be initiated after Independence to create a more communitarian society. The Catalan movement is coming from a different place; of course it contains divers elements, but there is much less challenge to neo-liberalism in it. In fact there is a significant rather unattractive streak in popular Catalan nationalism that feels they are being held back by much lazier and less productive societies in the South. Catalan Independence is not really a threat to neo-liberalism. Yet, so insecure do the Establishment feel about their position in this time of rational popular discontent, any change is to be resisted.

The silence of the international community and the Establishment’s NGO’s on the repression of democracy in Catalonia is shameful.

I am currently in Ghana, and there is in West Africa a liberation movement which is even less fashionable, an oppressed people whose cause nobody espouses – the Anglophone Cameroonians. This week several hundred young men in South West Cameroon have been arrested and taken away by security forces, with real brutality in many cases. I wrote in The Catholic Orangemen of Togo about the torture, discrimination and deprivation of liberty suffered by the Anglophone Cameroonians over decades, about my own visit there and my thwarted determination to focus the Foreign and Commonwealth Office  on the issue.

Very occasionally, NGO’s pay limited attention to this injustice. The International Bar Association protested against the arrest of a barrister, Agbor-Balla, who was charged with terrorism before a military tribunal for helping organise a human rights demonstration. He was released last month after six months harsh imprisonment, together with other community leaders, but a much larger wave of arrests is now under way, aimed at preventing a pro-Independence demonstration by Anglophone Cameroonians this weekend. There is, of course, an obvious parallel with events the same weekend in Catalonia.

Why has the international community ignored the plight of the Anglophone Cameroonians? Well the UK, as the former colonial power, finds the whole subject embarrassing and has no interest at all in interfering. African governments are notoriously unwilling to call each other out on human rights abuse. Plus the entire colonial legacy of the divide between Anglophone and Francophone West Africa is a neuralgic point in the region, affecting many relationships between rulers and states. Persecution of an Anglophone minority by a Francophone government is an issue that, if raised within the remit of the regional organisation, ECOWAS, would cause a very large can of worms to be opened. Without any powerful voices speaking up for the Anglophone Cameroonians, the United Nations is under no pressure to be involved.

Let me know of any good websites with inside information on events in Catalonia, as we will not get a true picture from mainstream media. I will try and get you a clear picture of the events in Cameroon this coming weekend.

Inside IndyRef2 – Scotland waking to a new dawn