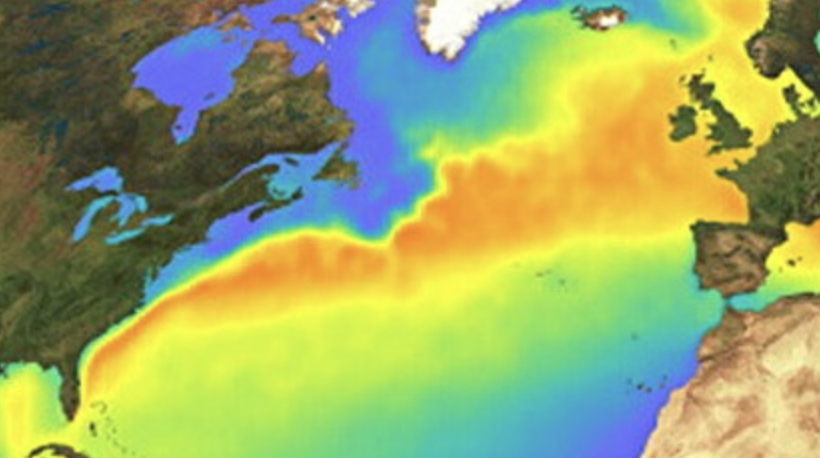 Laypersons call it the Gulf Stream. It’s the current of relatively warm ocean water that flows from the Gulf of Mexico across the Atlantic ocean to Europe. And it’s a big part of why the British Isles and the rest of Europe enjoy the temperate climates they do, even though their landmasses are as far north as icy Newfoundland, Canada where winter temperatures average -15c.

Without the Gulf Stream, it’s questionable whether northern Europe would ever have supported as many human inhabitants as it does.

This week, Climate Now partners reported that the Gulf Stream—or, as it’s technically known, the Atlantic Meridional Overturning Circulation—is the weakest it’s been in more than a millennium, with climate change the likely cause.

The Gulf Stream could weaken even further, experts say, if humanity fails to counter global heating by reigning in emissions. Such additional weakening will lead to punishing extreme weather in Europe and worsening sea-level rise on the US East Coast. Decades down the line, it could even lead to a “tipping point” that tosses global weather systems into chaos.

But climate breakdown like this is not a foregone conclusion. As CBS’s Jeff Berardelli writes, “The decisions we make now in terms of how quickly we transition away from fossil fuels will determine the outcome.”

Nevertheless, this news is a harrowing reminder that the climate emergency is a story that’s unfolding all around us, on a planetary scale, even as a majority of our climate coverage focuses on politicians, businesses, activists, and other power players.

It’s the climate emergency the story of our time and a story that deserves the attention of every newsroom in the country. It really is an emergency and should be treated as one.

Anyone who says that tackling the climate emergency is too much too expensive – only has to look at the global response to the Covid-19 pandemic. $8trillion dollars has been spent by governments saving economies that have been shut down, global movement has all but been halted and globalisation radically slowed. Yet this pandemic will not kill anywhere near as many people or destroy as much economic activity than the slow-burn effects of an unchecked climate emergency.