Are America and Britain Preparing for World War III? 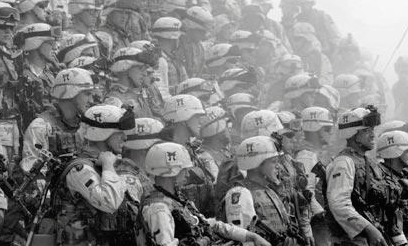 Is this why they’re held, preparing for the unthinkable, possible WW III? Neocons infesting Washington intend letting nothing deter their quest for unchallenged global dominance, an agenda reflecting pure evil.

Britain is a longtime reliable US ally, both nations partnering in each other’s high crimes. Is David Cameron, complicit with Washington, preparing for escalated war, perhaps intending to confront Russia belligerently – inventing a phony reason as a pretext?

A new London Telegraph report suggests it, saying “more than 1,600 British troops will head to the Middle East to practise an Iraq invasion-scale operation for the first time in more than a decade” – the last one in Oman in 2001.

According to The Telegraph, citing unnamed sources, “Exercise Shamal Storm could be a dry run for one day having to send a large armoured force of British troops to Eastern Europe if there was ever a Russian confrontation with Nato.”

“This isn’t a counter-Isil exercise, If anything, this is much more about us being prepared to join the US in Ukraine than it is in Syria. This is not the sort of force you(‘d) expect to roll into Aleppo to take on a bunch of jihadists.”

Are UK combat troops preparing to join American ones in Pentagon chosen war theaters – in Syria, Iraq, Ukraine or elsewhere?

Is Iran at risk? Are provocative East Asia operations planned? US-led NATO targets all nations not operating by Washington rules.

Planned UK Jordanian operations involve practicing “theater entry tactics…landing in a hostile area,” preparing for all contingencies, according to The Telegraph.

An unnamed UK military spokesman said the planned Jordanian exercise “presents the British Army with a challenging environment in which to assure its combat readiness to deploy and support an armoured force of up to 30,000 troops anywhere in the world.”

“The exercise will test key evolving concepts such as the air deployment of a very high readiness field hospital and the latest explosives ordnance disposal and search capabilities, all of which will enable us to be more agile in deterring threats to the UK and its interests.”

Preparing for possible war with Russia is madness. Putin is the world’s preeminent peacemaker, forthrightly supporting resolving conflicts diplomatically – threatening no other nations.

Claims otherwise are malicious Big Lies. Earlier he said “only an insane person and only in a dream (could) imagine…Russia…suddenly attack(ing) NATO.”

Peace and stability in the West are anathema. Will US-dominated NATO confront Russia militarily? Is WW III inevitable – a potentially cataclysmic nuclear clash if initiated?

By Stephen Lendman. He can be reached at lendmanstephen@sbcglobal.net.

His new book as editor and contributor is titled “Flashpoint in Ukraine: US Drive for Hegemony Risks WW III.”