By Craig Murray – Sometimes truth-telling is a difficult act because truth is a simple matter of fact; who might seek to exploit that truth is a different question. It is however incumbent on those who know truth to reveal it to the best of their ability, particularly if it contradicts an untruth being put about widely. The lie that WikiLeaks is acting as an agent of the Russian state is one that needs to be countered. Wikileaks is much more important than a mere state propaganda organisation, and needs to be protected.

Political lying is a sad fact of modern life, but some lies are more dangerous than others. Hillary Clinton’s lies that the Podesta and Democratic National Congress email leaks are hacks by the Russian state, should be countered because they are untrue, and because their intention is to distract attention from her own corrupt abuse of power and money. But even more so because they recklessly feed in to a Russophobia which is starting to exceed Cold War levels in terms of open public abuse. 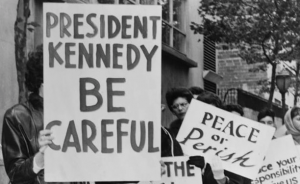 Cuban missile crisis: Three men go to war – The USA and Russia face-off over Cuba. Clinton makes no secret of her intentions to deal with Putin over Syria?

Clinton has made no secret of her view that Obama has not been forceful enough in his dealings in Syria, and within her immediate circle she has frequently referred to the Cuban missile crisis as the precedent for how she believes Russia must be faced down. It is her intention to restore US international prestige by such a confrontation with Putin in Syria early in her Presidency, and perhaps more to the point to restore the prestige of the office of POTUS (President Of The United States) and thus enhance her chances of getting her way with a probable Republican controlled senate and congress.

The problem with a game of nuclear armed chicken is we might all end up dead. The Americans do not read Putin well. As my readers know, I am in no way a fan of Putin. He believes he has a personal vocation to restore Russian greatness and has been ever more consumed by a religious devotion to the Orthodox Russian Church.

It seems to me highly improbable Hillary can make him Putin back down over Syria. I am no more a fan of Assad than I am a fan of Putin. Nevertheless to risk nuclear war over a desire to replace Assad with rival swarms of vicious disjointed Al-Qaeda backed jihadist militias, scarcely seems sensible.

Is Trump any less dangerous? I don’t know. I simply fail to understand the cultural background from which he springs, and what I do understand, I dislike. Were I an American, I would have backed Bernie Sanders and I would now back Jill Stein.

It is worth noting that Hillary’s claim that 17 US Intelligence Agencies agree that Russia was the source of the leaks is plainly untrue. All they have said is that the leaks “are consistent with the methods and motivations of Russian-directed attacks.” Under extreme White House pressure to state that the Russians did it, that extremely weak statement was the only thing that the US Intelligence chiefs could cobble together. It is very plainly an admission there is no evidence that Russia did it, but the appalling corporate media have reported it as though it “proves” Hillary’s accusation of Russia is true.

Bill Binney is like myself a former recipient of the Sam Adams Award – the World’s foremost whistleblowing award. Bill was the senior NSA Director who actually oversaw the design of their current mass surveillance software, and Bill has been telling anybody who will listen exactly what I have been telling – that this material was not hacked from Russia. Bill believes – and nobody has better contacts or understanding of capability than Bill – that the material was leaked from within the US intelligence services.

I was in Washington last month to chair the presentation of the Sam Adams Award to heroic former ex-CIA agent and whistleblower John Kiriakou. There were on the platform with me a dozen or so former very senior and distinguished officers of the CIA, NSA, FBI and US Army. All now identify with the whistleblower community. There were speeches of tremendous power and insight about state abuse, from those who really know. But as usual, not one mainstream media outlet turned up to report an award whose previous winners and still active participants include Julian Assange, Edward Snowden and Chelsea Manning.

Similarly my statement of definite knowledge that Russia is not behind the Clinton leaks has caused enormous interest in the internet. One article alone about my visit to Assange has 174,000 Facebook likes. Across all internet media we calculate over 30 million people have read my information that Russia was not responsible for these leaks. There is no doubt whatsoever that I have direct access to the correct information.

Yet not one single mainstream media journalist has attempted to contact me.

Craig Murray is an author, broadcaster and human rights activist. He was a British Ambassador from August 2002 to October 2004. Murray complained to the Foreign and Commonwealth Office in November 2002, 2003 and in June 2004 that intelligence linking the Islamic Movement of Uzbekistan to al-Qaeda was unreliable, immoral and illegal, as it was thought to have been obtained through torture. For that the British government sacked him.