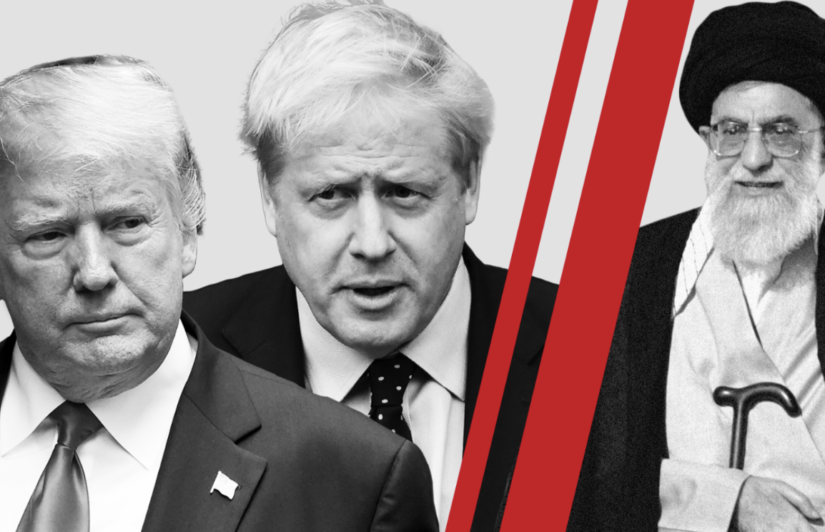 The Iran crisis is clearly demonstrating that both British and American officials have little idea on how to cope in a crisis without warning. After returning from holiday, Boris Johnson ended up demanding that Tehran end its threats of ‘retaliation or reprisals’ – and then stopped short of echoing his foreign secretary’s backing for US action, who had himself changed tune form the day before. But the chaos in the American administration is far worse. To get some sort of idea of what is happening inside the media space in America – here are two high profile journalists, both with extensive personal experience of Iran, Washington and the tensions caused over the years.

First up, we have Reza Marashi, former research director at the National Iranian American Council – which is the largest organization representing people of Iranian Heritage (a powerful lobby) in the United States and a prominent American journalist. Then we have Rukmini Callimachi. She is a correspondent for The New York Times covering ISIS & al-Qaeda, previously with seven years in West Africa and an ex-AP bureau chief.

Both are on the inside track when it comes to issues relating to US-Iranian relations and this particular crisis.

In brief, the crisis was started when Donald Trump dramatically escalated tensions by assassinating Qasem Soleimani, a general of the Iranian Revolutionary Guard. Soleimani is regarded as the second most influential leader in Iran and is attributed with kicking ISIS operations out his own country and in Iraq. He is regarded by Iranians as a hero. Assassinating him to the Iranians would be like the killing of Churchill to Britain back in the 40s. A response is expected.

“All Trump cares about is shitting on Obama’s legacy, sucking up to donors, and distracting from impeachment. None of this is about American interests or security”

Over the past few days, I’ve spoken extensively with career U.S. government officials as they’ve worked around the clock to try and mitigate the damage from Trump’s ineptitude on Iran.

We have no functional national security decision-making process in place. We have no plan for what comes next. They are woefully unprepared for what’s about to pop off, and they’re too stupid to realize it. People here are freaking out, and rightfully so.

We’re still trying to dig out from underneath the last war of choice, and now they’re trying to start a new one.

When did most of us find out about killing Soleimani? After it already happened. Since then, we’ve been trying to cobble together contingency planning on the fly, but these charlatans ignore most of it, and then Trump does more stupid shit that puts us back at square one.

All Trump cares about is shitting on Obama’s legacy, sucking up to donors, and distracting from impeachment. None of this is about American interests or security. He’s surrounded by ideological lunatic sycophants like Pence and Pompeo. But they’re far from the only ones.

So many of Trump’s top advisors on Iran are military vets who served multiple tours of duty in our wars in Iraq, Afghanistan, and elsewhere. They believe to their core that Iran is the reason why they lost those wars, and they’re dead set on payback – no matter what it takes

They’ve been pushing to kill Soleimani for years, and they finally baited Trump into it. They think war with Iran is long overdue, so for them, this was a means to an end. When Iran responds, they’ll tell Trump to hit the Iranians harder. You see where this could go

They know the Iraqis are gonna kick them out now, so they’re gonna try to kill as many as possible on their way out. Iranians, Iraqis, whoever. Some of them are advising Trump to tell the Iraqi government to fuck off and dare them to make us leave. I shit you not. Insanity

When I used your points about Soleimani’s murder being a catalyst for Iranians to rally around the flag, they said that was ‘Obama apologist bullshit,’ and the Soviet Union forced people against their will into public displays of support. So apparently Iran is a superpower now

Trump is threatening war crimes against Iran, and none of his top advisors have the courage to publicly oppose it. Instead, they act like cowards and go on background with journalists to express their opposition. They should all resign. They don’t deserve to serve this country.

We have friends that are getting deployed into war zones, but for what? Trump has deployed 14,000 troops over the past 6 months, and it didn’t prevent the current crisis. At what point do we start asking whether deploying troops is part of the problem rather than the solution?

The scariest part is that they’re just making shit up to justify their preferred course of action. When we point out inaccuracies or question logic, we’re at best yelled at or at worst cut out of the process. Most of the political appointees are paranoid, unqualified, or both

Last year, if you would’ve asked me whether American institutions are durable enough to prevent a Trump-led war with Iran, I would’ve said absolutely. Today, I’m not so sure. For as bad as it looks to you all on the outside, it’s even worse when you see it from the inside.

One of Trump’s top Iran advisors got suckered into a honey trap, had their laptop/iPhone stolen and hacked before they woke up, and the White House refused to take precautionary measures regarding their security clearance. Ladies and gents, I give you the Trump administration.

In conclusion: Yes, folks. It really is that bad. I am but a humble messenger of truth. The voice of the voiceless. That is all. You may now return to your regularly scheduled programming.

Here is what Callimachi has said about the ongoing crisis:

“Hard to decouple his killing from the impeachment saga”

I’ve had a chance to check in with sources, including two US officials who had intelligence briefings after the strike on Suleimani. Here is what I’ve learned. According to them, the evidence suggesting there was to be an imminent attack on American targets is “razor-thin”.

In fact, the evidence pointing to that came as three discrete facts: a) A pattern of travel showing Suleimani was in Syria, Lebanon & Iraq to meet with Shia proxies known to have an offensive position to the US. (As one source said that’s just “business as usual” for Suleimani).

More intriguing was b) information indicating Suleimani sought the Supreme Leader’s approval for an operation. He was told to come to Tehran for consultation and further guidance, suggesting the operation was a big deal – but again this could be anything.

And finally, a) and b) were read in the context of c) Iran’s increasingly bellicose position towards American interests in Iraq, including the attack that killed a U.S. contractor and the recent protest outside the American embassy.

But as one source put it a) + b) + c) is hardly evidence of an imminent attack on American interests that could kill hundreds, as the White House has since claimed. The official describes the reading of the intelligence as an illogical leap.

One official described the planning for the strike as chaotic. The official says that following the attack on an Iraqi base which killed an American contractor circa Dec. 27, Trump was presented a menu of options for how to retaliate. Killing Suleimani was the “far out option”

Trump chose a more moderate option which involved the Dec. 29 strikes on the positions of an Iranian-backed militia. Then came the protest at the gates of the US embassy in Baghdad.

It was after the embassy protests that the president, according to one US official, chose the Suleimani option, but the problem at that point in time is that American intelligence did not know his precise whereabouts. They scrambled to locate him, says the official.

According to the official, the strike on Suleimani was pulled together so quickly that initially, the US was not sure PMF leader Abu Mahdi al-Muhandis was in the convoy. He was also killed and is also viewed as an Iranian proxy:

Another is attacks on American diplomatic and military outposts in Iraq, Lebanon and Syria, and further afield. The official I spoke to was particularly concerned for American troops stationed in Iraq, some of whom are co-located with Shia militias.

How does this impact the war against ISIS? I turned to Mike Knight for insight. He’s studied Iraq since the 1990s. What he told me is that months before the strike that killed Suleimani, the tensions with Iran had already degraded America’s ability to fight ISIS in Iraq.

In 2019, America has been denied airspace and access to operations in Iraq to go after ISIS at the behest of Iran-backed groups. The US has also been told to stop communicating with Sunni tribes. These are important setbacks that have already weakened the US’ posture in Iraq. It’s all been downhill,” Mike knight told me, in terms of America’s access to the ISIS battlespace in recent months due to Iranian pressure on Iraqi officials. One upshot? US special operations forces have been on the offensive in Diyala, Nineveh and Kirkuk provinces.

A likely outcome of the recent strike is that small, out-of-the-way outposts for special operations forces will be deemed too vulnerable and will be eliminated. Fighting ISIS is no longer the priority if the outer wall of the US embassy is being attacked.

Before I go back to the pool let me just say the obvious: No one’s trying to downplay Suleimani’s crimes. The question is why now? His whereabouts have been known before. His resume of killing-by-proxy is not a secret. Hard to decouple his killing from the impeachment saga.

For more on the ongoing confusion over the now mysterious letter in which the US military appeared to inform Iraq that it is withdrawing US troops and retracted follow Liz Sly who is the Washington Post Beirut bureau chief covering Syria, Lebanon, Iraq and beyond.