Israeli Officials Warn of Another Round of Hostilities With Gaza 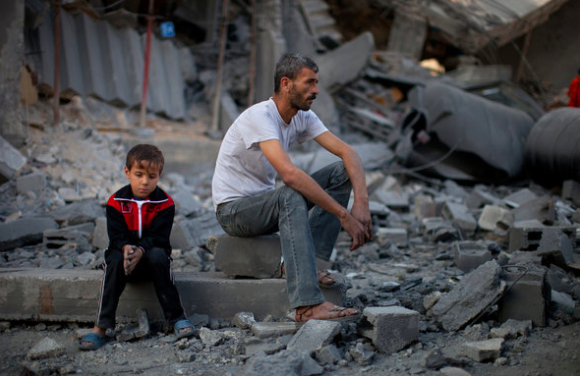 The Israeli leadership shows no signs of heeding the lessons of an official report into the 2014 Gaza war that led to massive destruction and loss of life in the tiny coastal enclave, Palestinians warned this week.

After a two-year inquiry, the State Comptroller, an official Israeli watchdog, published a report on Tuesday into the 51-day war that began in July 2014. It was highly critical of Israeli government officials, as well as Israel’s military and its intelligence services.

In particular, the 200-page document faulted Israeli Prime Minister Benjamin Netanyahu for failing to address the mounting humanitarian crisis in Gaza – conditions that made hostilities ever more likely, according to the report.

Netanyahu was also blamed for failing to pursue diplomatic moves that might have averted the confrontation or brought it to a quick end, sparing much of the bloodshed.

The war killed more than 2,250 Palestinians, the majority of them civilians, and 73 Israelis, almost all of them soldiers. According to United Nations figures, more than 100,000 Palestinians were made homeless by Israeli bombing that destroyed swaths of the enclave.

Comptroller Joseph Shapira’s findings come as Israeli officials have again warned of the likelihood of another round of hostilities with Gaza, possibly within the next few months.

The precariousness of the situation was underscored this week as Israeli air strikes hit five sites in Gaza on Monday, wounding four, after a rocket from Gaza landed in an open space in Israel.

Israel has launched three major military operations against Gaza over the past eight years, after the Islamic group Hamas won Palestinian elections in 2006 and took control of the enclave a year later. Israel has imposed a blockade ever since, tightly limiting the entry and export of goods.

But Ghassan Khatib, a former Palestinian Authority minister, said the report’s section on the Israeli government’s political failings had been overshadowed by the rest of the report, which dealt with operational and intelligence shortcomings.

“It is hard to believe that there will be any serious lessons learned by Israel’s political leadership from this report,” Khatib told Al Jazeera.

So far, the debate about the report in Israel has focused on a lack of preparation for coping with what Israelis term Gaza’s “terror tunnels”. Hamas used a network of concealed tunnels to launch surprise attacks after Israeli ground forces entered the enclave.

Khatib said: “The comptroller failed to examine the deeper issue of the Israeli leadership’s motivation in repeatedly heating up the front with Gaza. That was all about internal political competition, about jockeying for position within the ruling government coalition.”

Gaza made an easy military target for Israel because of its prolonged isolation, Khatib added. “The threat [posed by Gaza] has been exaggerated to the Israeli public to justify these wars.

Successive governments have expected to win with little cost to their own side. Attacking Gaza empowers the right and helps to secure its success at the next election.”

Shapira’s report did not recommend action be taken against any of the officials it identified, or accuse them of committing crimes. Instead it highlighted a failure to recognise the tunnels threat, a lack of intelligence sharing, and inadequate operational plans. Difficulties locating and destroying the tunnels, according to the report, led to a more protracted ground operation than expected. The implication was that this increased casualties on both sides.

Most Israeli commentators thought it unlikely that Netanyahu would pay a political price for these criticisms, especially after such a long delay in publishing the report.

Nonetheless, in an apparent sign of Netanyahu’s discomfort with the findings at a time when he is facing a series of corruption investigations, he lashed out pre-emptively at Shapira at a meeting of his Likud party on Monday. He suggested that the ombudsman had betrayed the security establishment.

In a statement the next day, as the report was released, Netanyahu claimed that the 2014 war had been an exceptional success. He said Israel had “hit Hamas harder than it had ever been hit before” and that, as a result, there had been “unprecedented quiet” from Gaza.

Khatib said Shapira’s report overlooked the escalation of hostilities by Israel in the weeks preceding the war. Israel, he noted, had made mass arrests of Palestinians in the West Bank as it searched for three Jewish youths who had been abducted. They were later found killed.

This week, an editorial in Israel’s daily Haaretz described the war as Israel’s “revenge” for the youths’ deaths. The editorial criticised Shapira for failing to question the wisdom of a “scorched-earth policy” by Israel that had kept Gaza’s population of two million under a lengthy blockade. Given this strategy, the paper said, another round of hostilities was inevitable.

Hamdi Shaqura, deputy director of the Palestinian Centre for Human Rights, based in Gaza City, said most of the Palestinian public had shown little interest in the report. “This investigation and others like it are not interested in justice for the thousands of victims of Israel’s brutal attacks,” he told Al Jazeera.

“This is about Israel refining its operational capabilities so it can prepare better for the next attack. The chief beneficiaries will not be Palestinians, but the war criminals in Israel who will draw conclusions about how they can better conceal their crimes next time.”

Shaqura said the report’s references to the humanitarian crisis in Gaza were divorced from political realities. “This humanitarian crisis isn’t an accident. It has been sustained by Israel’s siege for more than 10 years. Israel wants Gaza isolated, and its population barely able to survive. That is the status quo for Israel.”

He noted that an Israeli defence ministry document from 2008, made public four years later, included advice on the amount of food Israel should allow into Gaza to keep the population on the minimum number of calories.

Shaqura said: “Even when this report deals with the humanitarian crisis in Gaza, it is not in the context of finding a political solution to end it. Rather, Israel is more interested in improving its management of the crisis.”

‘Volcano about to erupt’

The comptroller’s report noted that Netanyahu’s government had done almost nothing to address warnings from military officials more than a year before the 2014 war that Gaza’s humanitarian crisis was unsustainable.

In this context, Shapira highlighted an apparent mea culpa from Moshe Yaalon, the then defence minister, two days into the war. He reportedly told officials: “If Hamas’ distress had been addressed a few months ago, Hamas might have avoided the current escalation.”

In fact, observed Barak Ravid, an analyst for Haaretz, Israel had made things substantially worse in Gaza in the weeks preceding the hostilities. In early June 2014 it had imposed economic and diplomatic sanctions on a Palestinian unity government formed between Hamas in Gaza and Fatah in the West Bank, in an attempt to undermine it.

Shortly afterwards, Netanyahu’s government sought to isolate Robert Serry, then the UN’s special peace envoy, as he battled to transfer funds from Qatar to pay the salaries of Gaza’s public workers.

Gaza was “a volcano waiting to erupt”, wrote Ravid.

The ‘Wall’ in East Jerusalem

Haidar Eid, an academic at al-Aqsa University in Gaza, said conditions had deteriorated even further since 2014. He noted that two years ago the UN forecast that Gaza could be “uninhabitable” by 2020. It said the large-scale destruction of Gaza’s infrastructure in 2014 had only accelerated that process.

More than 90 per cent of Gaza’s water is considered “unfit” for human consumption. Shortages of electricity provoked the first mass public protests in January, with some families suffering blackouts for up to 21 hours a day.

Israel has also continued the enclave’s isolation. Last month a delegation from the European parliament was again denied access to Gaza as it sought to assess the continuing need for reconstruction since the 2014 war.

And Netanyahu is reported to be hampering efforts to offer Gaza relief. A proposal by transport minister Yisrael Katz to build an artificial island off Gaza’s coast to serve as a seaport and airport has yet to be discussed by the cabinet, a year after it was raised.

At the same time, Herzi Halevi, head of military intelligence, warned a parliamentary committee of growing despair in Gaza. He reportedly said: “Israel will be the first to feel it when things explode.”

Eid told Al Jazeera: “When Israeli ‘experts’ talk about how to manage Gaza’s crisis better, they sound like they are discussing how best to run a zoo so the animals remain quiet.”

He said Hamas supporters in Gaza viewed the report’s focus on the tunnels as a vindication of the group’s claims that it had been victorious in 2014. “Commentators here believe that this report has the power to bring down Netanyahu,” he said.

But Netanyahu’s difficulties with the report and his corruption scandals were also seen as a dangerous moment. Most Palestinians, said Eid, agreed with Israeli analysts that another outbreak of hostilities was on the horizon.

“When Netanyahu is in such trouble, the assumption is that he will exaggerate the military threat of Hamas and the danger of the tunnels to justify launching another massacre,” he said. “He needs a big distraction and Gaza can supply it.”

Jonathan Cook is an award-winning British journalist based in Nazareth, Israel, since 2001 who was awarded the Martha Gellhorn Special Prize for Journalism. The judges’ citation reads: “Jonathan Cook’s work on Palestine and Israel, especially his de-coding of official propaganda and his outstanding analysis of events often obfuscated in the mainstream, has made him one of the reliable truth-tellers in the Middle East.” See Jonathan’s books HERE