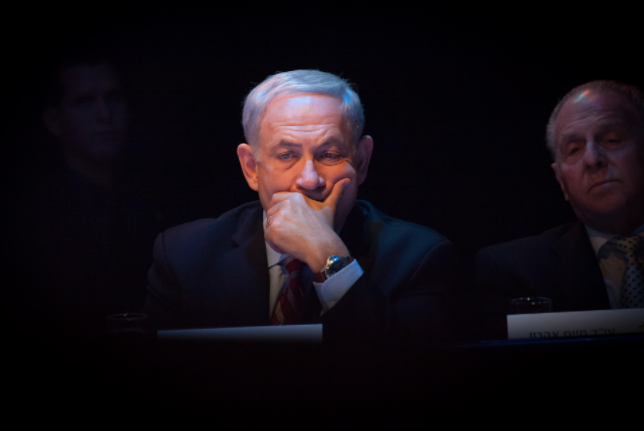 By Jonathan Cook: Israel’s Knesset has passed its first vote on a new bill defining Israel as ‘a national home of the Jewish people’. New legislation to cement the definition of Israel as a state belonging exclusively to Jews around the world is a “declaration of war” on Palestinian citizens of Israel, the minority’s leaders warned this week.

The bill, which defines Israel as the “national home of the Jewish people”, passed its first vote in the Israeli parliament on Wednesday, after it received unanimous backing from a government committee on Sunday.

Prime Minister Benjamin Netanyahu has vowed to get the measure on to the statute books within 60 days.

Among its provisions, the legislation – popularly known as the Jewish Nation-State Bill – revokes the status of Arabic as an official language, even though it is the mother tongue of one in five citizens. Israel’s population includes a large minority of 1.7 million Palestinians.

The legislation affirms that world Jewry has a “unique” right to national self-determination in Israel, and calls for the government to further strengthen ties to Jewish communities outside Israel.

It also increases the powers of so-called “admissions committees” that block Palestinian citizens from living in hundreds of communities that control most of Israel’s land.

In addition, critics are concerned that the legislation is intended to stymie prospects of reviving peace talks with the Palestinian leadership in the occupied territories. US President Donald Trump is due in the region later this month in what is widely assumed to be an attempt to kick-start a long-stalled peace process.

Netanyahu, however, has already indicated that he will insist on a precondition that Mahmoud Abbas, the Palestinian president, recognise Israel as a Jewish state. The new bill effectively sets out the terms of the state Abbas is expected to recognise.

Netanyahu said this week that all Zionist parties in parliament would be expected to support the legislation. “The bill establishes the fact that the State of Israel is the nation-state of the Jewish people in our historic homeland,” he told supporters of his Likud party.

He added: “There is no contradiction at all between this bill and equal rights for all citizens of Israel.”

Ayman Odeh, head of the Palestinian-dominated Joint List party in the Israeli parliament, warned that the legislation would ensure “the tyranny of the majority over the minority”.

Under the bill, Hebrew alone will be an official language, with Arabic accorded only “special status”. Palestinian citizens already complain that most public services and official documents are not provided in Arabic.

“The aim is to portray institutional racism in Israel as entirely normal, and make sure the apartheid reality here is irreversible,” Haneen Zoabi, a Palestinian member of the Israeli parliament, told Al Jazeera.

“It is part of the right’s magical thinking – they are in denial that there is an indigenous people here still living in their homeland. We are not about to disappear because of this law.”

In strictly legal terms, the Jewish Nation-State Bill offers limited changes. Since its founding in 1948, Israel has defined itself as a state of the Jewish people rather than of all the country’s citizens, including its Palestinian minority.

The Law of Return of 1950 allows only Jews to immigrate to Israel and receive citizenship. Adalah, a legal rights group, has documented dozens of laws that explicitly discriminate against Palestinian citizens.

But the new legislation is significant for reasons beyond its immediate legal implications.

Not least, it gives Israel’s self-definition as the nation-state of the Jewish people something akin to constitutional standing, observed Ali Haider, a human rights lawyer and former co-director of Sikkuy, an organisation lobbying for equal citizenship rights.

The bill, if passed, will join a handful of Basic Laws intended to provide the foundation for any future constitution. Such laws take precedence over ordinary laws and are much harder to repeal.

“This is a very dangerous step because it makes explicit in a Basic Law that all Jews, even those who are not citizens, have superior rights in Israel to those citizens who are Palestinian,” he told Al Jazeera.

An alternative draft of the new law that promised equal rights to all citizens was effectively blocked by the government in January when it came up for consideration.

Haider said the new version would provide the constitutional foundation to justify a tide of other laws intended to marginalise Palestinian citizens and erode their rights as citizens.

An Expulsion Law passed last year gives Israeli parliament the power to expel Palestinian MPs if they make political statements the Jewish majority disapprove of. Another bill before the parliament, the Muezzin Law, silences the Muslim call to prayer.

Such laws are almost certain to be challenged in Israel’s supreme court. “The judges will be much more reluctant to intervene if the Jewish Nation-State Bill is in force,” Haider said. “They will feel under pressure to ignore basic democratic principles and give priority to Israel’s Jewish character.”

He added that there would be little opposition from the Jewish public. A survey by the Israel Democracy Institute last December found that more than half of Israeli Jews wanted any citizen who rejected Israel’s definition as a Jewish state stripped of basic rights.

Another key goal of the bill for the Netanyahu government is its likely impact on any moves to revive peace talks with the Palestinians. Abbas and Donald Trump met last week.

Netanyahu’s government no longer pays even lip service to the idea that it might agree to a Palestinian state. Most debates in the Israeli cabinet focus instead on intensifying settlement building and preparations for annexing areas of the West Bank.

Zoabi noted that since Netanyahu came to power in 2009, he has worked tirelessly to persuade Washington to accept a new precondition for talks: that the Palestinian leadership must first recognise Israel as a Jewish state.

The new bill would place Abbas in a tricky position, allowing him to enter talks with Israel only if he first agrees to sacrifice the rights both of Israel’s Palestinian citizens to equal citizenship and of millions of Palestinian refugees to return to their former homes.

“This law is aimed not only at Abbas but at Trump,” said Zoabi. “It gives him a map instructing him exactly what can be negotiated over and what the terms of a solution must look like.”

Avi Dichter, a member of Netanyahu’s party who drafted the bill, indicated the diplomatic use it would be put to.

Netanyahu echoed Dichter, saying this week that the bill was “the clearest answer to all those who are trying to deny the deep connection between the people of Israel and its land”.

It is probably not coincidental that the Nation-State Bill is being fast-tracked as far-right ministers in Netanyahu’s government have drafted separate legislation to apply Israeli laws in the West Bank. This is a key component of efforts by settlers and their supporters in government to annex the West Bank by stealth.

Marzuq al-Halabi, a Palestinian journalist writing for the Israeli website 972, warned this week that on the back of the Nation-State Bill the government would seek to redraw Israel’s borders to include parts or all of the West Bank.

The resulting “apartheid regime” would then “create… ‘justified crimes’ against the Palestinian people, such as population transfer or removal,” he wrote.

A Haaretz editorial agreed that Netanyahu was laying the groundwork for annexing the West Bank without conferring rights on its Palestinian population.

The new law, it said, was intended as “the constitutional cornerstone for apartheid” in Israel and the occupied territories, allowing Israel to “maintain control over… a Palestinian majority living under its rule”.

Jonathan Cook is an award-winning British journalist based in Nazareth, Israel, since 2001. Jonathan was awarded the Martha Gellhorn Special Prize for Journalism. The judges’ citation reads: “Jonathan Cook’s work on Palestine and Israel, especially his de-coding of official propaganda and his outstanding analysis of events often obfuscated in the mainstream, has made him one of the reliable truth-tellers in the Middle East.” Go To his website HERE