Some devastating facts about the Australian bushfires 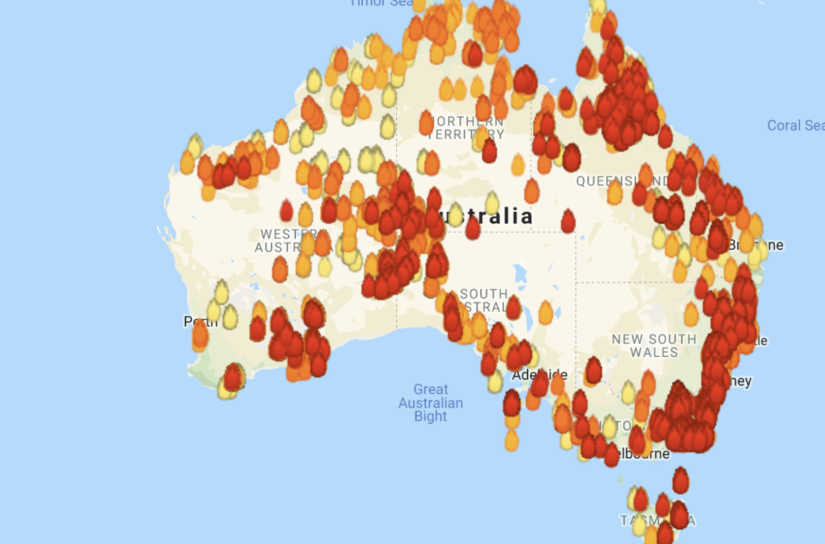 We found an interesting Tweet thread, which has some very interesting facts about the Australian bushfires. For the sake of not distorting the thread as it’s not our Twitter account, this thread is published here unamended (apologies for the bad language but context is important here). We’ve checked out some of the claims (but not all due to time constraints) and they seem to check out. The main image is the current bushfire map (source link).

One-seventh of the state of Victoria is on fire. The fire front in the state of New South Wales is so long that, if you made it a straight line, it would stretch from Sydney to Afghanistan. The fires are being fought by volunteers.

The Australian government refuses to discuss the fact that the NSW fires have now been burning for three months, and will still be burning in three months. Climate change is a “political issue” that shouldn’t be discussed at this time, apparently.

Many of the volunteer firefighters are unemployed; their benefits have been suspended because, while they’re saving people and habitats and homes, they can’t apply for the requisite number of jobs per week the government expects them to continue receiving benefits.

The Australian Prime Minister, at the height of the crisis, went on holiday to Hawaii, which his office first denied and then insisted he was trying to get home, but it’s impossible to get flights from Honolulu to Sydney (???)

The New South Wales emergency services minister has also gone on holidays. And in the midst of this, the prime minister has declared that the country should take heart from its brave and courageous…cricketers, who are playing against New Zealand.

Also, while the entire country faced catastrophic fire warnings (so no barbecues, people!), the cities all had fireworks displays. One, in Adelaide, very unsurprisingly caused a (thankfully limited) brush fire. Millions were spent on these. But not to pay the firefighters.

It is true that Australia has bushfires every year, but the sheer scale of this event is unprecedented, as well as the fact that the fire season is now so long that typical preventative initiatives, such as backburning, are far too dangerous.

The devastation in Australia right now FAR exceeds the Amazon fires or the California fires by MANY ORDERS OF MAGNITUDE, and there is no expectation that it will recede for at least several more months. In parts of Sydney, breathing the air is equivalent to a pack of cigarettes.

Public buildings have been forced to close in Sydney and the capital, Canberra, because the smoke is concentrating in the ventilation systems, and is setting off building fire systems.

The average temperature across the entire country has been above 40C (105F). Australia is roughly the size of the contiguous United States. Imagine it being that temperature on average ANYWHERE in the country, from Denver to Boston, Seattle to New York.

And that firefront? Imagine an unbroken line of fire, stretching from New York to Los Angeles, then back to New York, then heading back to Los Angeles and getting at least as far as Indiana. That’s the firefront in JUST ONE STATE.

So, if you were wondering why I keep yelling that ScottMorrisonMP is a coward who must resign, this is why. He didn’t start this, no. But he is the prime minister who, in this moment of Armageddon, continues to insist that climate change is not worth talking about.

And it is HIS people who, learning that two people had been killed, quipped that it was okay because they “probably voted Green.” This man is a gormless quisling who fiddles (at resorts in Hawaii) while Australia burns, and he comes back to sing the praises of coal. Fuck him.

I’d like to clarify a point here: having originally said that volunteer firefighters “want to be there” and none will be paid, the federal government has now approved that firefighters who have taken days off work will now be paid $300/day for a maximum 20 days.

Sydney’s famed New Years Eve fireworks went ahead despite the fires. A petition calling on the government to cancel the display and give the funds to firefighters and farmers instead got more than 280,000 signatures.

A fire tracker map (main image) maintained by researchers in Western Australia shows that they are also threatening areas around every major city in the country.

Australia experienced its hottest-ever drought conditions in 2019, and the country has experienced record-breaking heat over the past few weeks.

Australia is one of the highest per-capita emitters of carbon dioxide in the world, according to Climate Analytics, an advocacy group that tracks climate data.

On Wednesday, bushfires burned in all directions outside of Sydney, including a fire near the Blue Mountains which has already destroyed an area larger than the state of Rhode Island. 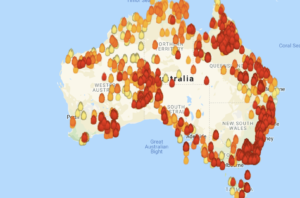